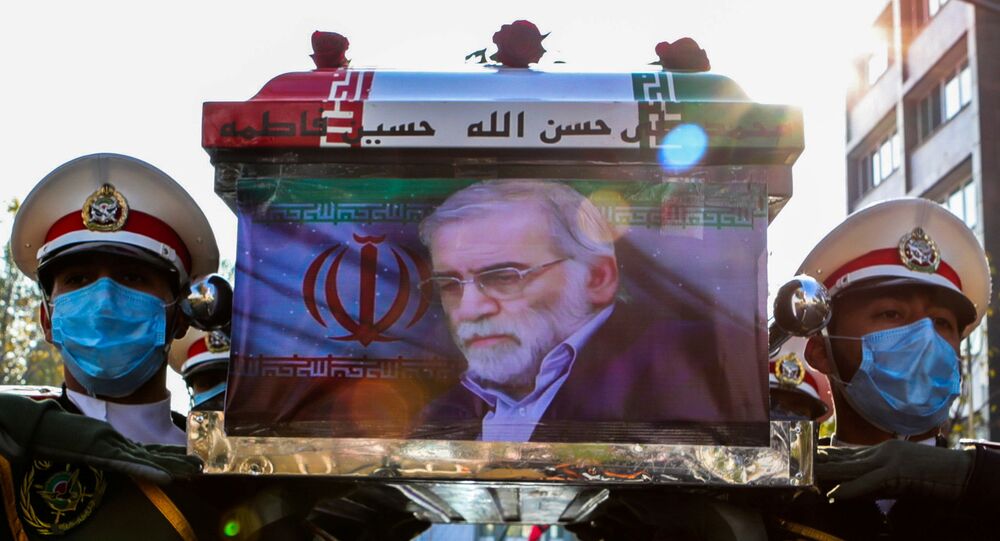 Senior Iranian officials have blamed Friday’s assassination of Mohsen Fakhrizadeh on Israel. Tel Aviv has so far remained silent on the matter.

Mohsen Fakhrizadeh, Iran's top nuclear scientist who was killed Friday on the outskirts of Tehran, was such a crucial figure in the country's covert nuclear programme that it will be hard to replace him with someone of similar leverage and stature, according to Maj. Gen. (ret.) Amos Yadlin, the ex-head of Israeli military intelligence, who referred to Fakhrizadeh as "the core source of authority, knowledge, and organisation of this programme".

He told a recent briefing for journalists that Iran's nuclear programme has two domains: an open part, stipulating the production of nuclear material that Tehran says is meant for civilian use, and a covert portion pertaining to weaponisation, which Iran denies.

While admitting that the recent killing, which Tehran has blamed on Israel, will hardly do any significant damage to the former, Yadlin acknowledged that the negative repercussions for the latter would "be huge", but they "cannot be measured since nobody knows exactly the scope and the depth and what the Iranians are doing covertly". Tel Aviv hasn't yet made any formal comment on the killing.

Yadlin went on to elaborate about various lines of thinking in the Israeli defence authorities' ranks regarding if there is any sense in assassinating nuclear scientists, pointing to two extremes. On the one hand, "there are those who say that when you deal with a system and you cut [off] its head it's always very useful", while on the other, there are those who believe any leader can be replaced, and "that the graveyards are full of people who were irreplaceable", he said.

He also noted some might argue that the liquidation of Iranian scientists does more harm than good, due to it creating anger and prompting revenge – something that may motivate Tehran to go out of its way to prove to the world that such assassinations won't stop them from reaching their intended goals.

Yadlin, who in 1981 partook in the operation that bombed Saddam Husein's nuclear reactor at Osiraq, went on to note that Fakhrizadeh, who was also a general in the Islamic Revolutionary Guard Corps (IRGC), along with former Hezbollah number two Imad Mughniyeh, killed in 2008, and IRGC Al-Quds force head Qasem Soleimani assassinated in Iraq in early 2020, were senior leaders and indispensable parts of their respective organisations.

After the latest assassination, Iranian Foreign Minister Mohammad Javad Zarif thundered that the move, which nobody has claimed responsibility for so far, was conducted by the proponents of hardline anti-Iran policies in the final days of President Donald Trump's tenure, in order to undermine the "the atmosphere that has been created in order to lift [the] tyrannical sanctions".

On Monday, the Iranian parliament passed a bill titled "The strategic measure for the removal of sanctions", designed to allow the country to increase uranium enrichment levels to 20 percent or more, notwithstanding the limit of 3.67 percent stipulated by the JCPOA.

Separately, the Revolutionary Guards' Quds Force expressed an intention to ally themselves with other "guardians of the Islamic homeland" to take revenge on the "terrorists and their masters" for the murder of Mohsen Fakhrizadeh, as follows from Commander Brig. Gen. Esmail Ghaani's comments in the wake of the gun and bomb attack on the scientist.

The killing of Fakhrizadeh in broad daylight on Friday afternoon comes less than a year after top Iranian general, Qasem Soleimani, died in a drone strike in early January. The attack was carried out by US forces, and it severely exacerbated tension between Tehran and Washington at the time, which have spiked since the Trump administration's unilateral withdrawal from the Iran nuclear deal (JCPOA) in 2018.