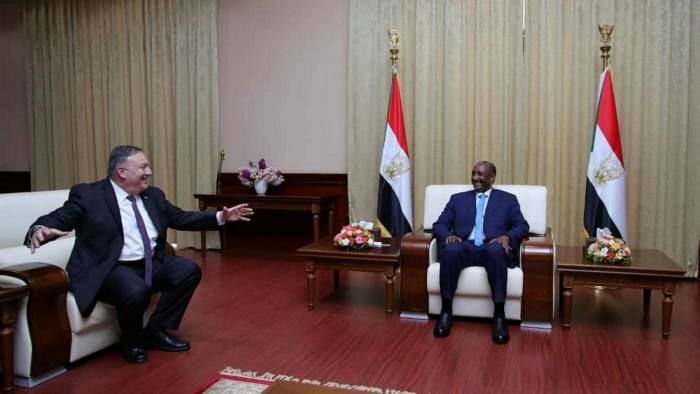 WASHINGTON (Sputnik) - The US administration has begun the process of removing Sudan from the State Sponsors of Terrorism list and expects bipartisan support for it, Secretary of State Mike Pompeo told reporters on Wednesday.

"I don’t know the precise timing, but we have begun the process to lift the designation of state sponsorship of terror... We believe there is a firm legal basis for doing it," Pompeo said during a briefing. "We think there will be enormous bipartisan consensus that it’s the right thing to do."

He added that during the negotiations the US tried to convince Sudan to recognise Israel.

"We also are continuing to work to get every nation to recognize Israel, the rightful Jewish homeland, to acknowledge their basic fundamental right to exist as a country. That certainly includes Sudan," Pompeo said.

The US administration has already brokered peace deals between Israel and two Gulf monarchies, the United Arab Emirates and Bahrain, and expects more agreements to follow soon.

On Monday, US President Donald Trump announced that the United States would take Sudan off its State Sponsors of Terrorism list after Khartoum pays $335 million to US terrorism victims and their families. Along with that, media reports circulated over the internet suggesting that Trump's announcement came as part of his administration ongoing policy to normalise Israeli ties with the Arab countries, including Sudan.

Sudan was placed on the US State Sponsors of Terrorism list in 1993 for sheltering Osama bin Laden for nearly five years at a time when the Al-Qaeda (terrorist group, banned in Russia) leader was involved in attacks on targets in the United States. Four years later, Washington introduced sanctions against Khartoum that limited the ability of Sudanese banks to work with foreign partners.

A breakthrough in relations between the US and Sudan was achieved in 2019 after President Omar Bashir was ousted from power and the Sovereign Council replaced the transitional military administration.