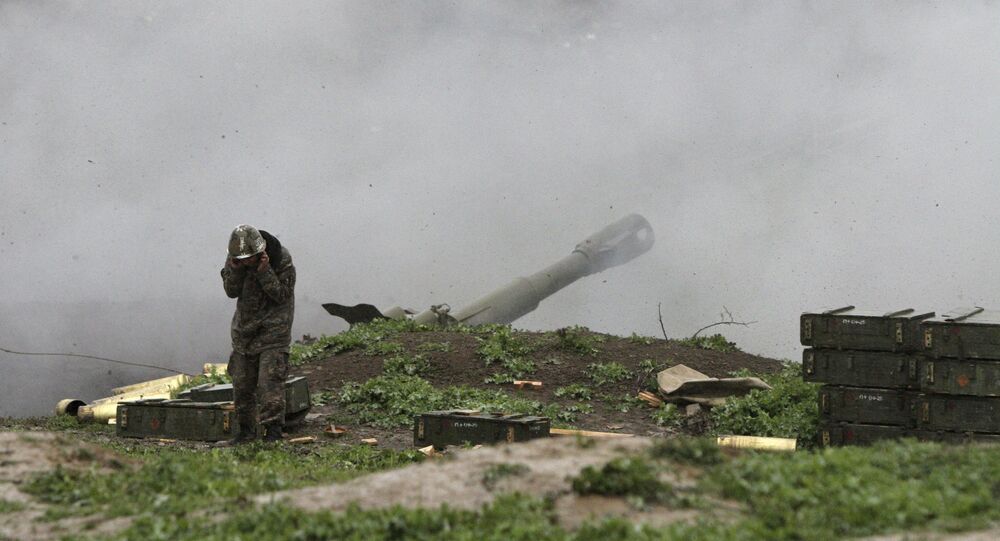 Kremlin Calls For Immediate Ceasefire in Nagorno-Karabakh Amid Clashes Between Armenia, Azerbaijan

Clashes between the two countries erupted on Sunday, with both Yerevan and Baku accusing each other of starting the hostilities. Azerbaijan has declared a partial mobilisation while Armenia has ordered a full one amid the escalating tensions.

Moscow has urged Armenia and Azerbaijan to immediately cease fire in Nagorno-Karabakh and show utmost restraint amid the crisis.

"We are calling on all the actors, both external and internal ones, to show maximum restraint, including in terms of rhetoric. It is necessary to be as cautious as possible in order to immediately achieve a ceasefire and get back to the negotiating table", Deputy Foreign Minister Andrey Rudenko told reporters.

Russian presidential spokesman Dmitry Peskov stressed that Moscow has an opportunity to stop the escalation due to its balanced position.

"It is very important to stop a military conflict, rather than figure out who is right and who is wrong. Russia has always had a balanced position. This position is what gives Russia an opportunity to use its influence and its good relationship with both countries, Armenia and Azerbaijan, to settle the conflict", Peskov told reporters.

He also said that Moscow is in close contact with Ankara regarding the tensions in the region.

"The Foreign Ministry was in contact with Ankara yesterday. So, the Russian side maintains full contact", Peskov told reporters when asked if Russian President Vladimir Putin was planning to hold phone talks with his Turkish counterpart, Recep Tayyip Erdogan.

On Sunday, Baku announced a counter-offensive in the area, citing alleged attacks and violations by the Armenian side along the line of control. Armenia also accused Azerbaijan of attacking its forces and ordered a mobilisation. Baku claims that over 550 Armenian soldiers were eliminated during the operations, while Yerevan has said that hundreds of Azerbaijani servicemen died amid the clashes.

Nagorno-Karabakh, an Armenian-majority autonomy, proclaimed independence from what was then Soviet Azerbaijan in 1991. A major conflict between Baku and Yerevan ravaged the area until 1994, when the sides agreed to start peace talks mediated by the OSCE Minsk Group.