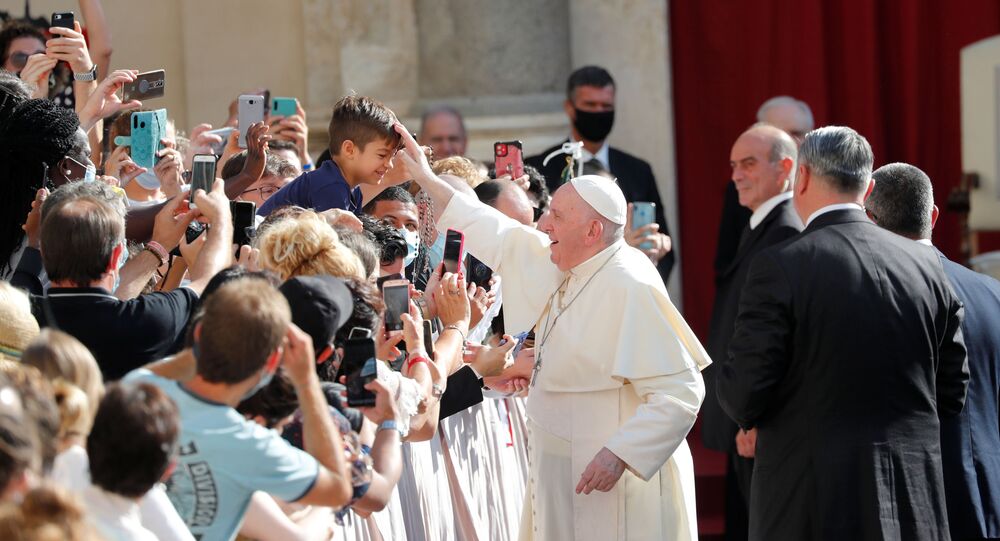 Pope Francis granted three brief interviews to writer and environmentalist, Carlo Petrini, who proclaims his agnosticism. These were published in Italy on Wednesday in a volume entitled Terrafutura. In it, the Pope and the author reminisce about their grandmothers' cooking, and venture beyond gastronomic topics.

Pope Francis has touted life’s joys such as a delicious meal and loving sexual intercourse as “divine”, unjustly falling victim to “overzealousness” on the part of the Catholic Church in the past, according to a newly-published book, cited by AFP.

"Pleasure arrives directly from God, it is neither Catholic, nor Christian, nor anything else, it is simply divine."

The pontiff acknowledged in the book, published Wednesday, that the church had previously sought to promote an “overzealous morality” that denied pleasure, adding it was “a wrong interpretation of the Christian message”, according to the outlet.

“The Church has condemned inhuman, brutish, vulgar pleasure, but has on the other hand always accepted human, simple, moral pleasure,” he said.

“The pleasure of eating is there to keep you healthy by eating, just like sexual pleasure is there to make love more beautiful and guarantee the perpetuation of the species,” says the Pope.

Focusing on the Pope's vision of “environmentalism with a social face”, outlined in his 2015 encyclical “Laudato Si”, the new book, written by Carlo Petrini, was published on 9 September.

​Petrini, a well-known Italian gastronomist and agnostic, is the founder of the global “slow food” movement established in the 1980s to ostensibly safeguard regional traditions in the face of the “fast food” consumerist trend.

The volume is based on three “frank and friendly” personal conversations between Petrini and the Pope, centering on their reportedly shared commitment to “cultivate and preserve” the “goods of the planet”.

The first of the conversations took place in 2018 in the wake of a disastrous earthquake in central Italy. The next “sit-down” occurred in 2019 just before the opening of the Synod of Bishops on the Amazon.

As it seeks to promote a message of “reconnecting” with the planet, the book is organized along five different themes: biodiversity, economy, migration, education and community, shown through the prism of a spiritual perspective.

Pope Francis: Gossip Is A 'Worse Plague Than COVID'