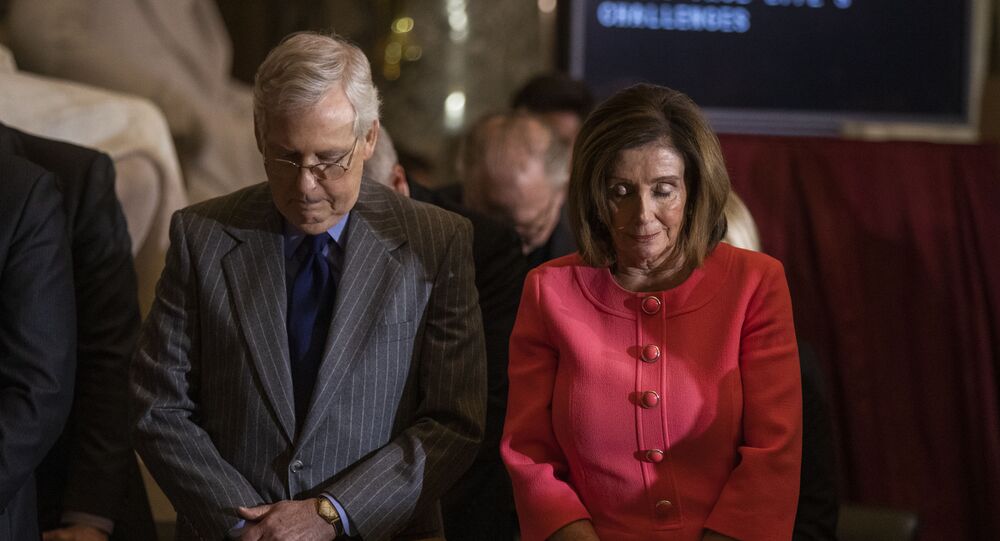 Top Republican and Democratic lawmakers are in a deadlock over a proposed fifth funding package in the US to help tackle the economic consequences of the coronavirus pandemic, with the parties clashing on how much should be spent to support both individual Americans and the nation's economy.

Republican Senate Majority Leader Mitch McConnell announced on Tuesday that a vote will be forced on the GOP's coronavirus relief package following weeks of closed-door negotiations between Republican Senators and the White House.

"Today, the Senate Republican majority is introducing a new targeted proposal, focused on some of the very most urgent healthcare, education, and economic issues. ... I will be moving immediately today to set up a floor vote as soon as this week", McConnell said in a statement.

​While McConnell did not provide any confirmation of the bill's particulars, it is expected to include a federal unemployment benefit, further Paycheck Protection Program (PPP) funding, and increased financial support for coronavirus testing and schools, as well as liability protection from lawsuits in virus-related cases.

It is also expected to cost some $500 billion, a 50 percent drop from the $1 trillion package Republicans previously proposed in July.

The Senate will return from its August recess on Tuesday, with an initial procedural vote organised for Thursday. However, the bill is not expected to get the 60 votes required to surpass a Democratic filibuster.

Democratic Senate Minority Leader Charles Schumer issued a letter to his caucus last week, describing the GOP bill as insufficient to address encroaching the ongoing health and economic crisis resulting from the pandemic, which has led to the deaths of at least 190,000 Americans.

“Republicans may call their proposal 'skinny,' but it would be more appropriate to call it 'emaciated.' Their proposal appears to be completely inadequate and, by every measure, fails to meet the needs of the American people”, Schumer wrote.

Despite a Democratic push for further support that is included in the bill, McConnell previously said that 20 of the 53-member Republican caucus would not vote for additional funding, highlighting party divisions amid the fifth relief package arrangement.

GOP leaders want a unifying 51 votes for the bill but have not themselves come to an agreement over key points such as language over school choice and tax credit for home school-related expenses.

Before the Senate vacation, Republicans proposed a $1.1 trillion package, while Democrats said they wanted House-passed legislation that included $3.4 trillion in funding.

Schumer and Democratic Speakers of the House Nancy Pelosi offered to drop their desired cost by $1 trillion if Republicans would increase theirs by the same amount. Republican lawmakers rejected the proposal.

McConnell Claims He's Short on Votes: Is This True or is He Playing Games?