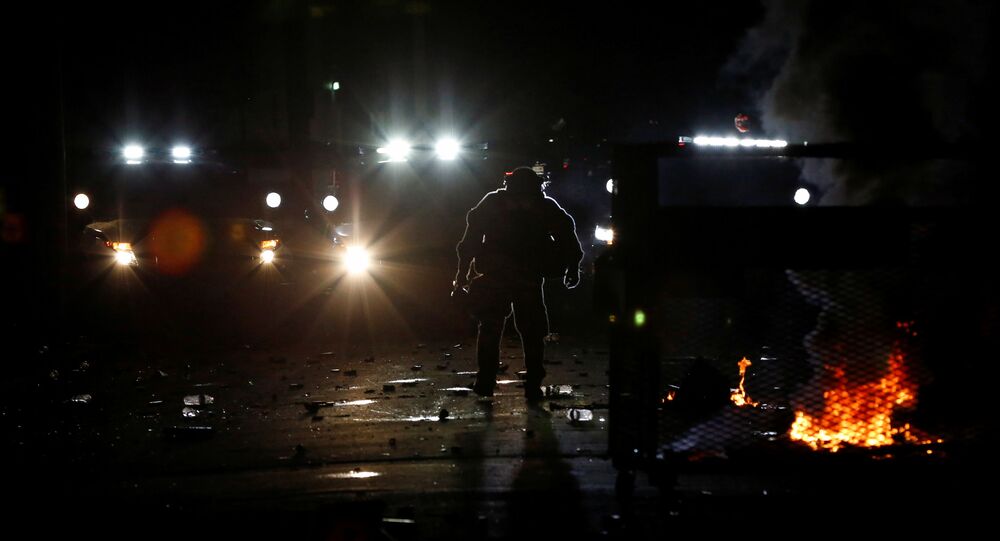 Portland became an epicenter of protests against police brutality and racism in the wake of the killing of an unarmed black man in Minneapolis in late May. The West Coast city has also been a major flashpoint for violence between rioting demonstrators, local police, federal law enforcement, and more recently, pro-Trump and anti-Trump protesters.

Iranian Foreign Minister Mohammad Javad Zarif has taken to Twitter to criticize US foreign policy following Acting Homeland Security Secretary Chad Wolf’s comments about “all options” being “on the table” in handling the escalating protests in Portland.

“‘All options on the table’ has long been a staple of US foreign policy. It simply means the law of the jungle: disregard for a fundamental principle of international law: Non-Use of Force,” the diplomat wrote.

"All options on the table" has long been a staple of US foreign policy.

It simply means the law of the jungle: disregard for a fundamental principle of int'l law: Non-Use of Force.

The foreign minister accompanied the tweet with a screenshot of an article about Wolf’s comments to ABC’s ‘This Week’ on Sunday.

In the interview, Wolf said that “all options,” including sending in more federal law enforcement to protest hit Portland in the wake of this weekend’s violence, even if local authorities oppose such a move, “continue to be on the table.”

“When we talk about Portland, they continue to refuse any type of federal assistance to bring that violent activity going on a little over ninety days [now] to a close. The citizens of Portland want this. We need to bring some normalcy back to Portland. And again if the state and local officials won’t do it, they need to act for assistance from the federal government,” Wolf added.

On Saturday, violent clashes between Trump supporters and Black Lives Matter protesters led to the shooting death of one anti-BLM protester, with several others arrested after the clashes.

Washington sent federal forces into Portland in July to protect federal property in the city’s downtown. The troops were withdrawn later that month. Last week, Portland Mayor urged Donald Trump not to send the National Guard into his city as the president considered the possibility after sending federal agents to Kenosha, Wisconsin following unrest there.

‘All options on the table’ has become a well-worn expression in US foreign policy in the post-Cold War period, and was used by officials in Washington ahead of and during the NATO bombing of Yugoslavia in 1999, by President George W. Bush during the lead-up to the invasion of Iraq in 2002-2003, by President Barack Obama in the months before NATO airstrikes against Libya, and by both the Obama and Trump White Houses on Syria. Trump and his aides have also repeatedly said that “all options are on the table” as far as Trump's policy toward North Korea and Venezuela are concerned.