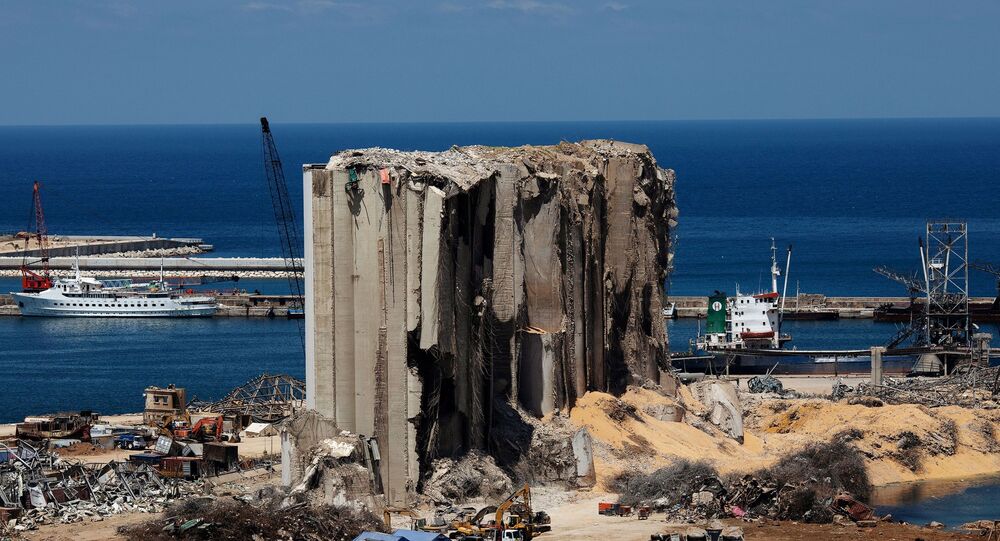 On 4 August, a massive blast shattered almost half of Lebanon’s main political and economic hub, killing over 180 people and injuring thousands more. Crowds of protesters have since rallied in the city and beyond, blaming the disaster on the authorities’ negligence and corruption.

France's President Emmanuel Macron has warned that Lebanon, a former French colonial-era protectorate, might return to civil conflict if it is left alone to deal with the crisis in the aftermath of the disastrous explosion at Beirut's port earlier this month.

© AP Photo / Jean-Francois Badias
French President Emmanuel Macron, delivers a speech during a press conference a part of his visit in Mulhouse

“If we let Lebanon go in the region and if we somehow leave it in the hands of the depravity of regional powers, it will be civil war” as well as “the defeat of what is the very identity of Lebanon”, he pointed out as he prepared to head to Lebanon on Monday in a new attempt to press the Middle Eastern country’s establishment to introduce comprehensive changes after as many as 181 people died in the early August blast. Many blamed the incident on the authorities’ negligence of the public sector.

Paris is meanwhile impatient over the lack of progress in forming a new government to undertake necessary reforms, with Macron insisting that France would follow a policy of being “demanding without interfering” and that it awaits the passing of an anti-corruption law as well as reforming public contracts, along with the energy and banking sectors at large.

“If we do not do this, the Lebanese economy will collapse” and “the only victim will be the Lebanese people… who cannot go into exile”, he warned.

Separately, he lauded Lebanon’s multi-confessional make-up, saying it “is perhaps one of the last existing forms” in the Middle East of the “peaceful possible coexistence of religions” and a pluralist system based on “education and culture”.

However, he acknowledged that there are quite a few “constraints” in the Lebanese confessional system, as the country is shared by Christians as well as Sunni and Shiite Muslims alike. According to Macron, this detail has added to “what can be mildly described as vested interests” and that this has led to “a situation where there is hardly any [political] renewal and where there is there is almost an impossibility of carrying out reforms”.

Earlier, reports emerged about a petition making the rounds on the Internet to put Lebanon under a French mandate, which as of 7 August had racked up 50,000 signatures in 24 hours. The petition is focused on people's frustration with the Lebanese government's "total inability to secure and manage the country", its creators wrote.

"With a failing system, corruption, terrorism and militia the country just drew its last breath. We believe Lebanon be [sic] placed back under a French mandate in order to establish clean and durable governance", they added.

Beirut has recently seen vigorous protests as citizens have called for justice over the devastating Beirut port blast, blamed by many around the world on the ruling class’ corruption and nepotism, which have been undermining the country and its citizens' wellbeing since the destructive 1975-1990 civil war.

According to the authorities, the explosion that levelled the port and its vicinity on 4 August was caused by 2,750 tonnes of highly inflammable ammonium nitrate, confiscated by the customs services in 2014 and dispatched for storage to a port warehouse. An estimated 181 people were killed in the disaster, with tens of thousands more sustaining injuries. The Lebanese government declared a state of emergency in the capital and resigned less than a week after the Beirut blast, following severe public anger, with protesters calling for Prime Minister Hassan Diab to step down.