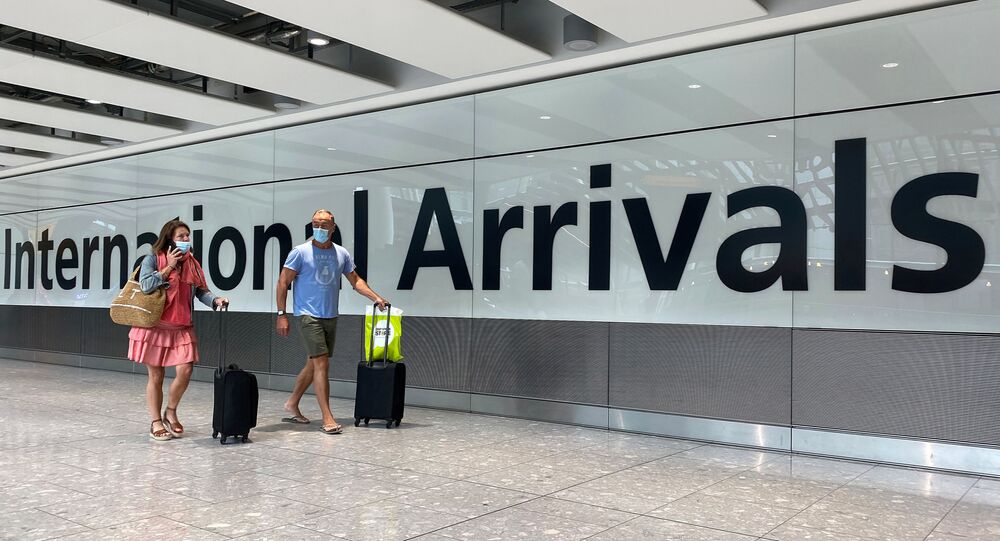 On 13 August the UK government removed France and The Netherlands, along with Malta and the Caribbean nations of Aruba, and Turks and Caicos, from its list of approved travel corridors over an increased risk of COVID-19 transmission, ordering all arrivals from the countries to adhere to a 14 day period of self-isolation as of Saturday morning.

Government ministers are suggested as initially having planned to introduce the rules as of 16 August, yet were forced to revise those plans, moving the deadline to 4am on Saturday. The measure is reported to have followed discussions with the three devolved administrations, Scotland, Wales and Northern Ireland, which are believed to have pushed “very firmly” for fast-tracking implementation of the move.

The alleged pressure from the three administrations was said to have met “no resistance” from UK Transport Secretary Grant Shapps.

In a succession of late-night announcements on Thursday, Grant Shapps confirmed that France, Monaco, the Netherlands, Malta, the Turks and Caicos Islands and the island of Aruba were being removed from the UK’s travel corridor list, as of 4am Saturday.

Returnees to the UK from the above-mentioned countries would have to self-isolate for two weeks under a mandatory quarantine.

Earlier, the devolved administrations, which have the right to decide individually which countries might be taken off the travel corridor list, were unanimous with England in choosing to announce the imposition of quarantine measures on arrivals from Belgium, Andorra and The Bahamas last Thursday.

When questioned at the Scottish government’s daily briefing on if it had pushed for the deadline to be rushed forward, First Minister Nicola Sturgeon acknowledged that Justice Secretary Humza Yousaf had been a participant of the four-nations call on Thursday night.

“It’s common sense that you would want to impose a requirement that you’re being told is necessary to keep the virus out of Scotland as quickly as possible,” said Sturgeon.

The minister insisted upon underscoring the risks to all who choose to travel abroad, saying:

“I can’t guarantee to you that if you go to country X today with one set of rules in place, then the same rules will still be in place when you’re due to come back from that country.”

Scotland’s Justice Minister Humza Yousaf responded to questions regarding the alleged pressure to move the quarantine deadline by confirming:

“I don’t intend to divulge the conversations that would take place in a four-nations call, but we make no apologies for, often on these calls, pushing everybody and ensuring all the other nations try to implement these changes as quickly as we possibly can, for the sake of public health and no other consideration but public health.”

Chaotic scenes followed the announcement of the new quarantine rules for arrivals, as UK tourists faced surging travel fares, as some airfares spiked six-fold, and crammed motorways in northern France on Friday.

An apparent slip-up by the minister, seen as proof of last-minute tweaks to government plans, added fuel to the confusion the announcement triggered, writes the outlet.

In a TV interview on Thursday evening, Shapps said that returning holidaymakers would have to undergo 14 days of self-isolation from Sunday, while the measures were set to come into force a day earlier. Reacting to the news, some holidaymakers in France booked return trips to the UK for later on Saturday.

The minister had reportedly subsequently realised the “possible confusion” caused by his statement, and according to a Department for Transport source requested that part of the interview not be broadcast.

The earlier decision to strip France, British holidaymakers’ second-favourite destination after Spain, of its quarantine exemption status followed a record daily surge in new COVID-19 cases reported by the country at 5pm on Thursday. On 13 August, France registered 2,669 new cases of the coronavirus infection in just 24 hours, marking the highest daily rise since its lockdown was lifted in May.

The move by UK ministers echoed a similar decision taken on 25 July regarding Spain, with quarantine measures announced with hours’ notice, as the country has been facing the worst coronavirus infection rate in Western Europe, with 675 "active outbreaks" registered last week.

While the shadow home secretary Nick Thomas-Symonds lambasted the move as an “example of the government failing to show the necessary strategy, grip and coherence when dealing with this issue”, adding that “travellers and businesses are paying the price”, Trades Union Congress (TUC) General Secretary Frances O’Grady reassured holidaymakers:

“Lots of Brits are currently on holiday in France. They will be worried about what this means for them and their families… That means asking employers to do the right thing and pay quarantined workers their full pay. And it means it ensuring that everyone is eligible for statutory sick pay – paid at at least the rate of the real living wage of £320 a week.”

The news comes as the UK government’s Scientific Advisory Group for Emergencies (SAGE) released documents that sought to slash quarantine periods by use of double testing for COVID-19.
SAGE cited a model that suggests if travellers are tested upon arrival in the UK, as well as five days after they enter a period of self-isolation, 85 percent of infected travellers are detected.

Coronavirus in UK: ‘Government Must Take the Lead on COVID’, Commentator Says