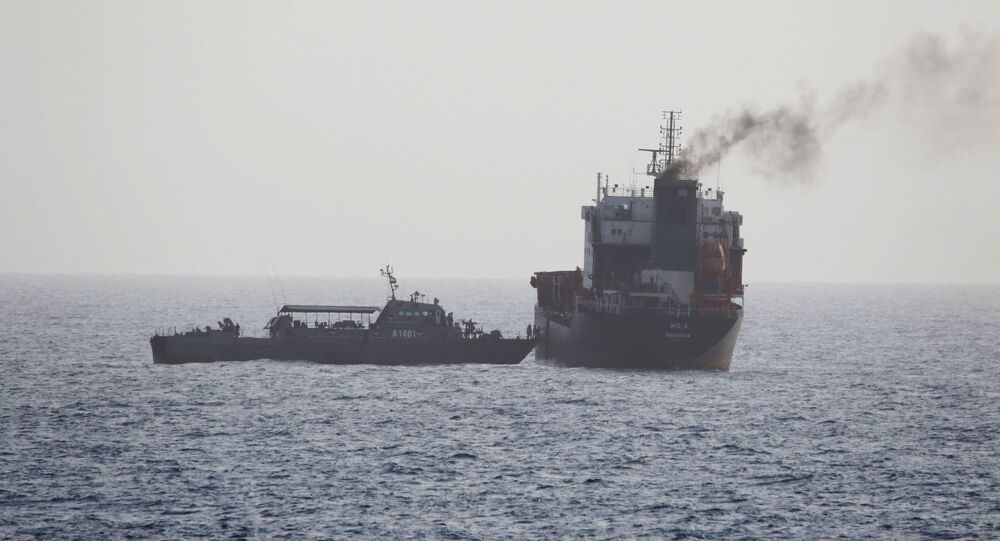 'Seized' Iranian Fuel Reportedly Transferred to Ships Bound for US

Earlier this year, the US turned away a number of vessels carrying Iranian fuel to Venezuela, threatening further sanctions in a bid to cut the pair off from their main source of revenue. Yet, the two partner nations voiced determination to continue their shipments regardless.

Iranian fuel cargoes targeted by an American warrant for seizure were transferred to other ships to further be transported to the US, Reuters reported, citing a US government source.

The owners of the four vessels carrying the oil reportedly agreed to the move.

An American judge issued a warrant to seize Iranian oil cargoes on four tankers in July after US prosecutors filed a lawsuit, with the warrant covering only the cargoes, not the vessels.

As Iran had made it clear it planned to transport the gasoline to Venezuela, Washington imposed sanctions on oil exports from both oil-producing countries to deprive them of their main source of revenue.

In late June, the United States slapped restrictions on five Iranian ship captains who delivered oil to Venezuela, with the Latin American country branding the measure as "an outburst of arrogance".

Iran promptly reacted, calling out the US sanctions targeting the captains that shipped fuel to Venezuela in defiance of US bans as "unlawful".

It warned that the move would see both Tehran and Caracas continue defying Washington's restrictions, despite the Trump administration having persistently warned governments around the world against making fuel shipments to Venezuela and providing port services, including in Gibraltar,  to Venezuela-bound ships.

© AP Photo / Vahid Salemi, File
Iran's Vice President Says US Failed to Stop Iranian Oil Exports
Following the mid-May shipment, reports emerged that the White House was even weighing military action to cut off trade between sanctions-hit Iran and Venezuela, however the theory didn't play out: all five vessels arrived safely. However, the US later moved to turn away two Liberian-flagged vessels carrying Iranian energy supplies to Venezuela by threatening to enhance limitations.

Iranian President Hassan Rouhani earlier emphasised that US sanctions would have less effect if Tehran had less dependence on this source of income. In mid-February, Rouhani said that Tehran for the first time in its history had stopped focusing on oil.

Separately, Tehran is now scrambling to find new routes for oil exports, primarily bypassing the key energy route — the Strait of Hormuz — since the instability in this area (in light of a number of oil tanker seizures there) may endanger oil deliveries from the entire region.

The Islamic Republic is currently constructing a pipeline from the Goureh oil terminal to the port of Jask, which will allow it to transport up to 1 million barrels of oil per day from the eastern part of the Persian Gulf directly to the port in the Gulf of Oman, going round the Strait of Hormuz. The project is planned to be finalised in the first quarter of 2021.