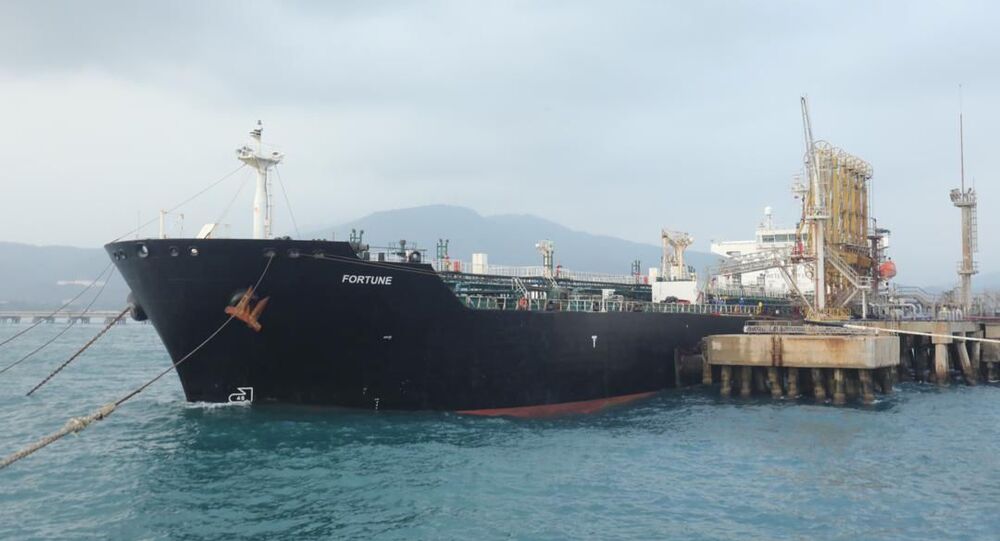 US Slaps Sanctions on Five Iranian Ship Captains Who Delivered 1.5 Mln Barrels of Oil to Venezuela

Earlier this month, Iranian Foreign Ministry spokesman Abbas Mousavi indicated Tehran’s readiness to go ahead with its oil shipments to Venezuela if "Caracas demands" more such supplies from Iran.

US Secretary of State Mike Pompeo announced on Wednesday that Washington had imposed sanctions on the captains of five Iranian tankers over oil deliveries to Venezuela.

“Today, the United States is sanctioning five Iranian ship captains who delivered around 1.5 million barrels of Iranian gasoline to Venezuela in support of the illegitimate Maduro regime”, Pompeo said.

The statement comes after the US Treasury Department announced that it was slapping Venezuela-related sanctions on four companies and four oil tankers belonging to these entities over their alleged involvement in the oil trade with the Latin American country.

This followed remarks by the Iranian Islamic Revolutionary Guard Corps' (IRGC) chief commander Hossein Salami, who praised Iran's resolve to send fuel tankers to Venezuela in the face of US threats to take action against Tehran and Caracas.

“We showcased our might, and our biggest display of power was the imposition of our will [on the enemies] and the sailing of [oil tankers] through high seas from the Persian Gulf towards Venezuela”, Salami told journalists earlier in June.

He spoke after Iranian Foreign Ministry spokesman Abbas Mousavi indicated Tehran’s readiness earlier this month to go ahead with its oil shipments to Venezuela if "Caracas demands more [such] supplies from Iran", which is practicing "its free trade rights with” the country.

© AFP 2021 / -
A worker of the Venezuelan state oil company PDVSA waves an Iranian flag as the Iranian-flagged oil tanker Fortune docks at the El Palito refinery in Puerto Cabello, in the northern state of Carabobo, Venezuela, on May 25, 2020

The statement was preceded in May by five Iranian tankers, the Clavel, the Faxon, the Fortune, the Forest, and the Petunia, delivering about 1.5 million barrels of oil to Venezuela, hit by a serious fuel shortage caused by US sanctions.

In a separate development last month, the Trump administration reportedly said that it was considering new sanctions and "other legal steps to disrupt Iranian oil exports to Venezuela" in response to what Washington describes as Tehran's attempts "to make inroads into Latin America".

US Sanctions Against Venezuela, Iran

Washington started slapping tough economic sanctions on the Venezuelan economy, which is in the grip of an ongoing crisis, back in 2018 in order to oust democratically elected President Nicolas Maduro.

Part of the US’ sanction pressure was freezing the US-based assets of the national oil and gas company Petroleos de Venezuela (PDVSA), something that was slammed by Caracas as an unlawful move and an attempt by Washington to get its hands on Venezuela's oil reserves.

Iran, in turn, is now also under US sanctions, which were reinstated in May 2018, when President Donald Trump announced Washington's unilateral withdrawal from the 2015 Iran nuclear deal, also known as the Joint Comprehensive Plan of Action (JCPOA).

The move led to growing US-Iranian tensions, which were exacerbated after top IRGC General Qasem Soleimani was killed in a US drone strike on his car at Baghdad International Airport in early January - an attack that was authorised by President Donald Trump.