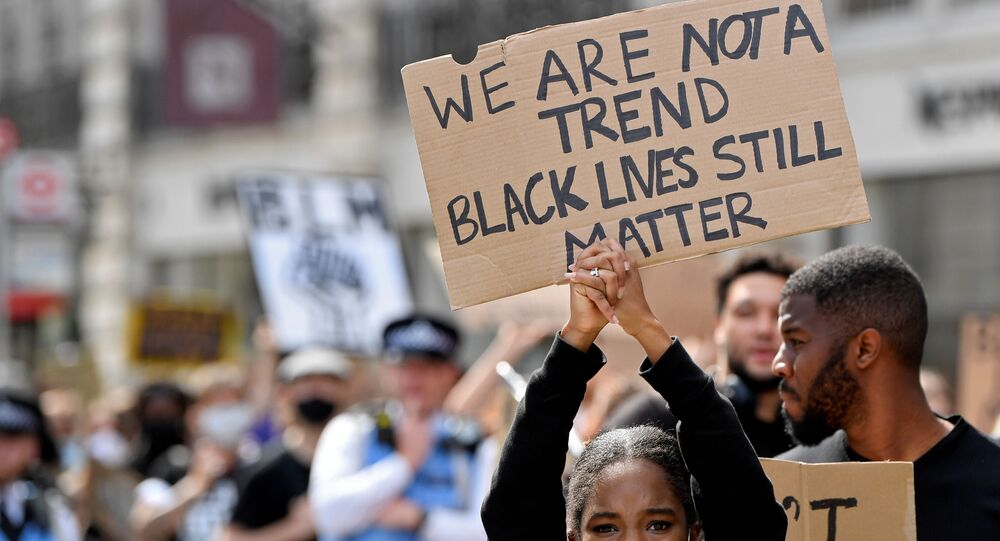 Created in the US in 2013 as an anti-racism activism and protest movement, Black Lives Matter has enjoyed a surge in support and media coverage in the wake of the George Floyd protests across the US and around the world. Activists have been criticized by conservatives, and by Israel supporters, however, over their attacks on the Jewish State.

The Campaign Against Antisemitism (CAA), a Britain-based NGO tasked with handling anti-Semitic incidents, has gotten into a Twitter spat with #BlackLivesMatterUK over a series of anti-Israel/anti-Zionism tweets.

“#BlackLivesMatter should aspire to be a movement against racism that unifies people and achieves lasting change, not a movement that spreads hatred and achieves lasting division,” CAA tweeted, responding to a BLMUK tweet suggesting that Britain’s politicians have been “gagged” and prevented from criticizing “Zionism and Israel’s settler colonial pursuits,” including recent plans to ‘apply sovereignty’ to large chunks of the West Bank.

Educate yourselves. You cannot fight prejudice with prejudice. pic.twitter.com/Sumxe9O7GX

Urging BLM to “educate themselves,” CAA alleges that its members have faced “calls for violence” against them by “prominent BLM supporters with no official condemnation.” Furthermore, the NGO argues, “so-called anti-Zionism exclusively denies Jews” the right to self-determination, “and is therefore anti-Semitic.”

Earlier Sunday, BLMUK expressed its solidarity with “Palestinian civil society in calling for targeted sanctions” against Israel, and implied that the systemic racism faced by black people in some Western countries is shared by the Palestinians.

Over a thousand parliamentarians in 25 European countries, 47 UN special rapporteurs, the Labour Party and dozens of UK MPs are among those calling for sanctions, effective measures and an end to Israel's impunity.https://t.co/9RqqDELT7xhttps://t.co/BBtHg8Hg5t pic.twitter.com/4WYw1kpzOB

One more time for those at the back.

From the British Black Panthers to Black Lives Matter, solidarity and learning from Palestinians in the fight against systemic racism has always been part of our shared struggle, and shared strength. pic.twitter.com/DlwBydqqNe

CAA countered that allegation by accusing BLM of being “bigots” who were “treating a well-worn path walked by many extremists and abhorred by real civil rights leaders like Dr. Martin Luther King Jr.”

Martin Luther King Jr in Boston, remonstrating with a student who had made a comment attacking ‘Zionists’ pic.twitter.com/anxBXurewO

In addition to BLM, the Campaign Against Antisemitism has repeatedly attacked the UK’s Labour Party for its criticism of Israel and other “anti-Semitic” behaviour, as well as academics, politicians and other public figures.

The BLMUK/CAA flame war comes as Israeli Prime Minister Benjamin Netanyahu plans to make good on his election campaign promises to annex as much as 30 percent of the West Bank, a move Hamas has warned would amount to a ‘declaration of war’ against Palestinians.

Last week, United Nations Secretary General Antonio Guterres urged Tel Aviv to abandon its West Bank plans. Meanwhile, countries in Europe and Israel’s Arab neighbours have similarly warned against the move, warning it would have an adverse impact on relations and regional stability. Benny Gantz and his Blue and White coalition, which joined Netanyahu’s Likud-based governing coalition after tense negotiations following three deadlocked elections, has also said that he would not be willing to back a sovereignty bid in areas with ‘many Palestinian residents.’