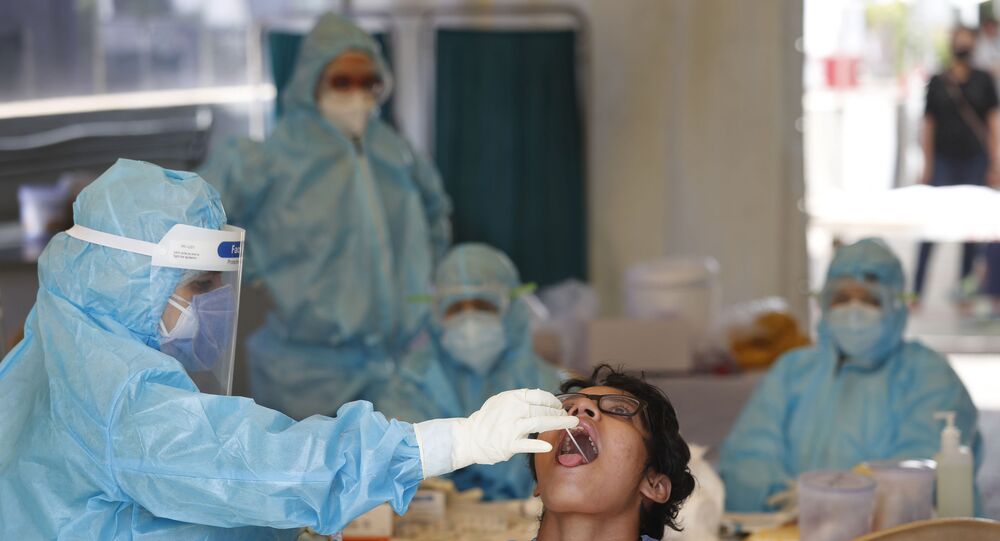 New Delhi (Sputnik): India’s national capital Delhi jumped to second place in term of cases in the country, with a tally of 66,602 COVID-19 cases, and reported a record single-day spike of 3,947 new infections on Tuesday, the highest reported by any Indian state so far.

As the coronavirus engulfs more areas of India’s national capital, Delhi Chief Minister Arvind Kejriwal has decided to imitate the testing policy adopted by China in Wuhan. Delhi aims to complete a blanket testing of every household in the capital in an unprecedented 12-day campaign.

Besides this, the Kejriwal government also aims to complete the testing of all the houses in the 261 containment zones by 30 June.

The Chinese city of Wuhan, where the coronavirus was first detected late last year, conducted mass testing on nearly 10 million people in a 19-day campaign earlier this month to contain the virus in new areas.

The capital will also strengthen surveillance and contact tracing in the containment zones and neighbourhoods that have been sealed as per the revised strategy released after a series of meetings between India’s Minister of Home Affairs Amit Shah and Chief Minister Kejriwal over the last week.

"Delhi's home isolation plan has been working very well. I have personally spoken to many patients on phone who underwent home isolation. I would urge Centre and Lieutenant General not to tinker with it and restore it back", said Kejriwal in a tweet on Wednesday.

© AP Photo / Rajanish Kakade
Private Hospitals in Delhi Feeding Off People’s Misery By Charging Exorbitant Prices for Beds
Amid the reports of hospital beds in Delhi being unavailablee, Home Minister Amit Shah stated that 8,000 additional beds are being prepared for people.

“I would also like to inform the people of Delhi that a 1,000-bed full-fledged hospital with 250 intensive care unit beds is being developed for COVID patients. DRDO and Tata Trust are building the facility. Armed forces personnel will man it. This COVID care centre will be ready in the next 10 days", he added.

India remains the fourth worst-hit country in the world, reeling with 456,183 total infections and 183,022 active cases. The country recorded 14,476 deaths as of 24 June, while 258,685 patients have been cured, as per data by the federal Health Ministry.

US Clampdown on India's Repatriation Flights Should Be Resolved Bilaterally, Analysts Say