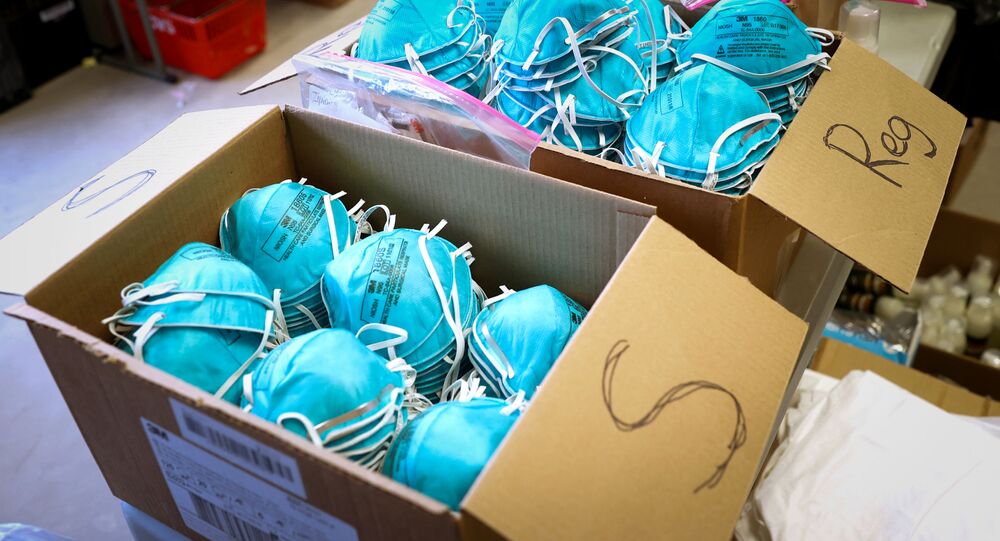 Amid the continuing COVID-19 pandemic, as countries struggle to maintain supplies of critically-important items, such as personal protective equipment and drugs, there are increasing calls among states for greater sovereignty on key goods.

A part of a touted new approach to national security amid the COVID-19 pandemic, UK Prime Minister Boris Johnson has issued orders for civil servants to draw up plans to put an end to the country’s reliance on China for both medical supplies and other strategic imports, reported The Times.

Led by Foreign Secretary Dominic Raab, two working groups have been reportedly set up as part of the effort, codenamed "Project Defend".

Sources quoted by the outlet say the aim is to identify the UK’s main economic vulnerabilities and adopt measures that would preclude attempts by “potentially hostile” foreign governments to use them as leverage.

© AP Photo / Frank Augstein
People wearing face masks to protect against the coronavirus, travel by the subway in London, Tuesday, May 12, 2020, as the country continues in lockdown

To ensure that Britain no longer depends on individual countries for non-food essentials, says the report, efforts will be enhanced to achieve a diversification of supply lines.

The outlet cites the government as saying:

“The coronavirus pandemic has demonstrated the importance of resilient supply chains to ensure the continued flow of essential items and keep global trade moving. That’s why we’re looking at what steps we can take to ensure we have diverse supply chains in place, to avoid shortages in the event of a future crisis.”

According to the report, the government review will also focus on personal protective equipment and drugs – particularly sensitive issues amid the current health crisis.

© AFP 2021 / PIPPA FOWLES
A handout image released by 10 Downing Street, shows Britain's Prime Minister Boris Johnson, standing behind a podium featuring the Government's new slogan "Stay Alert, Control the Virus, Save Lives", as he attends a remote press conference to update the nation on the COVID-19 pandemic, inside 10 Downing Street in central London on May 11, 2020. - The British government on Monday published its plan to ease the nationwide coronavirus lockdown in phases in England, with some schools and shops opening from June and recommending people wear face masks in some settings.

Earlier, Johnson promised lawmakers during Prime Minister’s Questions that steps would be taken to protect Britain's technological base, and that the MPs would hear more about these plans in the coming weeks. The comments came in connection with China’s tech giant Huawei having been permitted a limited role in providing equipment for the non-core parts of the UK’s 5G infrastructure rollout, a decision which has provoked anger among some backbench Tory MPs.

China exports an array of strategically-important goods to the UK, such pharmaceutical ingredients for producing painkillers, antibiotics and antiviral drugs.

Half of these supplies are imported by Britain from China.

Other important goods coming in from the Asian country include industrial chemicals, metal and electronics.

The current news comes as on Monday German Chancellor Angela Merkel and French President Emmanuel Macron announced their joint proposal for a €500 billion European recovery programme at a virtual conference on 18 May.

Seeking to take Europe out of the global health crisis “united and in solidarity,” with much of the funding intended to provide support “to the sectors and regions most severely affected,” and to be given as grants, not loans, emphasis was made on enhancing European independence in the health sector, including the development of a joint stockpile of medical equipment and medical supplies and the coordination of the procurement of vaccines and treatments.

Beijing has been facing mounting international criticism over its alleged failings in handling the coronavirus outbreak, which began in the Chinese city of Wuhan before it spread to the rest of the world.

On 21 May Donald Trump stepped up his attack on Beijing over the virus, tweeting that China's campaign of "disinformation" had aided in spreading the virus around the world.

....It all comes from the top. They could have easily stopped the plague, but they didn’t!

​China has been strongly rejecting all allegations, with the country’s Ambassador to the United Nations Zhang Jun saying the US should stop using scapegoating practices during the coronavirus pandemic.

"China urges the United States to really focus on the international efforts in coping with and combating the pandemic, avoiding politicisation of the pandemic issue, and to stop blaming and scapegoating practices," Zhang said on 19 May at a Security Council meeting.

China's 'Incompetence' is to Blame for 'Mass Worldwide Killing' - Trump