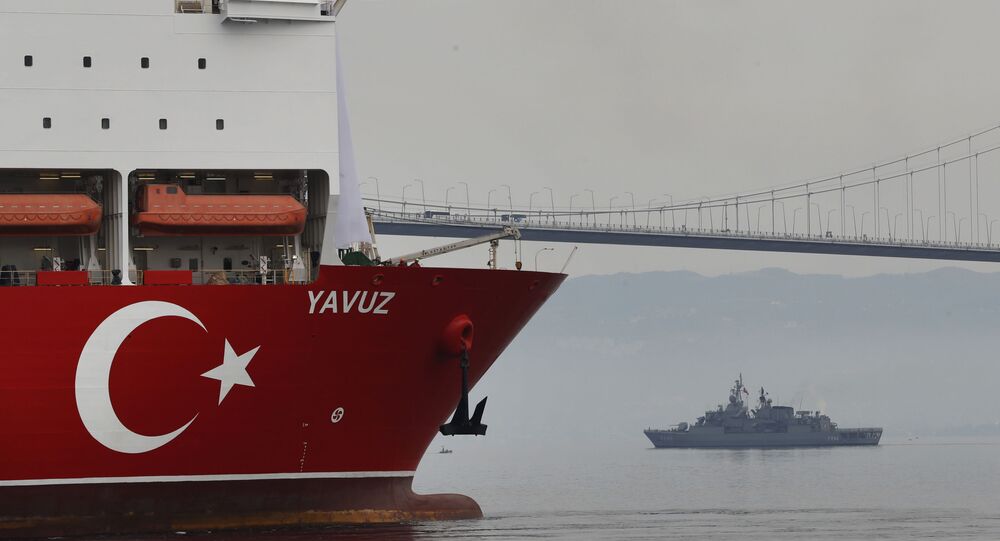 On Monday, the foreign ministers of Greece, Cyprus, France, the UAE and Egypt held a conference call, during which they denounced Turkey’s drilling activities in the eastern Mediterranean, as well as its military operations in Libya, conducted under a deal with the UN-backed Government of National Accord (GNA). Ankara rushed to respond.

© REUTERS / Murad Sezer
Turkey's 3rd Drilling Ship to Begin Operating in 2020 Amid Row With Cyprus - Erdogan
Last year, it signed a deal on maritime boundaries in the Mediterranean Sea and agreement on military cooperation with the internationally-recognised and UN-backed Libyan government. The border delineation agreement was deemed “illegal” by some nations, including Egypt, as Turkey moved forward with gas drilling activities in the disputed zone of eastern Mediterranean, something which is strongly objected to by Greece and Cyprus, as the latter argues that it has exclusive economic rights in the area.
...
Reddit
Google+
Blogger
Pinterest
StumbleUpon
Telegram
WhatsApp
1656
Tags:
Khalifa Haftar, Libyan National Army (LNA), Libyan Government of National Accord (GNA), offshore drilling, UAE, Egypt, Cyprus, France, Libya, Turkey
Community standardsDiscussion