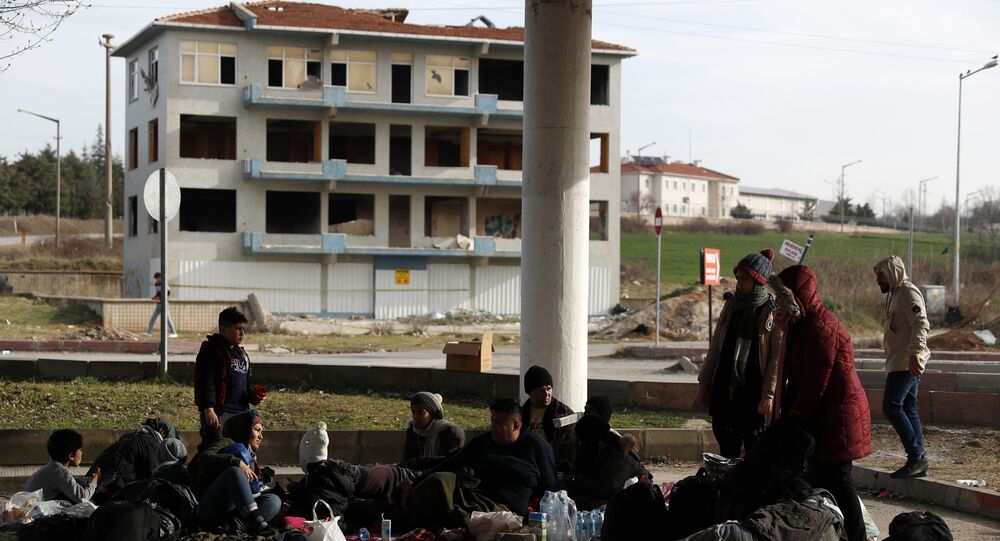 Turkey announced last month that it could no longer restrain the flow of refugees from Syria, and opened its borders. Following this decision, taken amid tensions in Syria's Idlib province, thousands of migrants have been attempting to enter Greece through Turkey. Police and army units have been deployed to the border.

Turkish President Recep Tayyip Erdogan has called on Greece to "open the gates" to migrants.

"Hey Greece! I appeal to you... open the gates as well and be free of this burden. Let them go to other European countries," President Erdogan said during a televised speech in Istanbul.

He added that he will travel to Belgium on Monday for talks with European Council President Charles Michel and European Commission President Ursula von der Leyen.

"I hope I will return from Belgium with different outcomes," Erdogan said.

The Turkish coast guard said on Saturday that Erdogan had ordered that they bar refugees from crossing the sea border with Greece due to a threat to their security.

The situation with migrants at the Greek-Turkish border escalated in late February after Ankara announced it had opened its border with the European Union to migrants and refugees following the recent increase in tension in the Syrian province of Idlib. Soon after, tens of thousands of migrants rushed to Turkey's border with Greece and Bulgaria to attempt to get into Europe.

According to Turkey, one of the reasons it has opened its borders to the EU was the lack of assistance from the bloc in dealing with the flow of migrants. Under the 2016 agreement between the two, Ankara promised to restrain the flow of migrants into the bloc, with Brussels pledging to provide funds to help Turkey care for the refugees.

On Thursday, Russian President Vladimir Putin and his Turkish counterpart, Recep Tayyip Erdogan, agreed on a ceasefire in Idlib. Two parties also agreed to create a security corridor six kilometres (3.7 miles) north and south of the M4 highway in Syria, which connects the provinces of Latakia and Aleppo.