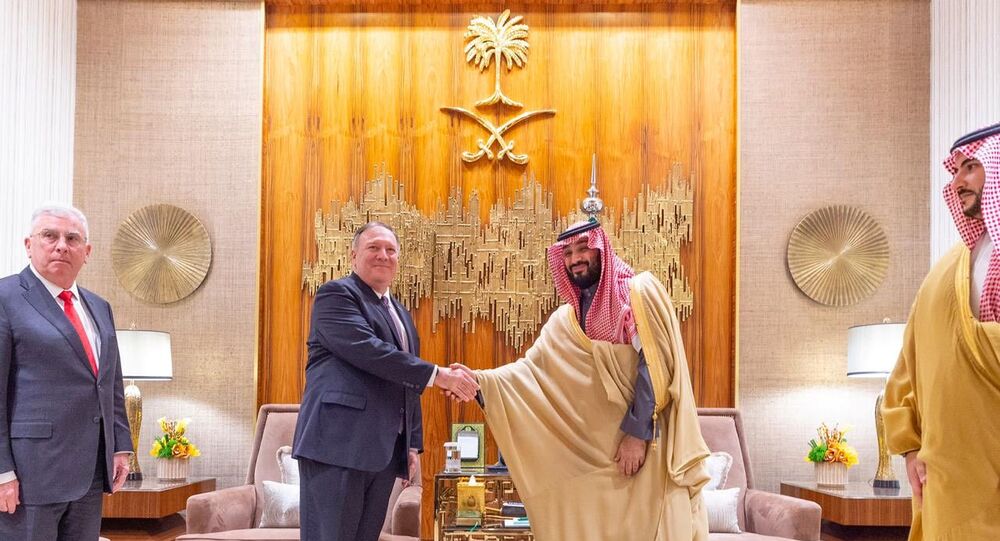 The visit came amid ongoing tensions between Tehran and Washington which escalated after top Iranian general Qasem Soleimani was killed in Baghdad in early January, in a move that was authorised by US President Donald Trump.

US Secretary of State Mike Pompeo has reiterated Washington’s push to grapple with the alleged “Iran threats” as he recently sat down with Saudi Arabia's King Salman bin Abdulaziz Al Saud and Crown Prince Mohammed bin Salman in Riyadh.

The State Department said in a statement that during the talks earlier this week, Pompeo "assured the Crown Prince that the United States stands with Saudi Arabia in the face of these threats, as reflected in our greater military presence in Saudi Arabia”.

Crown Prince Mohammed bin Salman Al Saud and I discussed the ongoing threat posed by the Iranian regime. We also discussed the situations in Syria, Iraq, Lebanon and the need for a united GCC. We stand together with Saudi Arabia in addressing these regional security challenges. pic.twitter.com/iTwQlW5Geh

The statement specifically referred to Pompeo’s visit to Prince Sultan Air Base near the Saudi capital, which “highlights the longstanding US-Saudi security relationship and reaffirms America's determination to stand with Saudi Arabia in the face of Iranian malign behavior”.

Pompeo tweeted on Friday that “Crown Prince Mohammed bin Salman Al Saud and I discussed the ongoing threat posed by the Iranian regime”.

Speaking to reporters in Ethiopia ahead of his visit to Saudi Arabia, he stressed that the US “pressure campaign” against Iran is underway and that “it’s not just an economic pressure campaign, it’s diplomatic pressures, isolation through diplomacy, as well”.

The US Secretary of State visited Riyadh amid heightened tensions between Tehran and Washington, which further deteriorated on 3 January, when Iranian Islamic Revolutionary Guard Corps’ elite Quds Force Commander Qasem Soleimani was assassinated at Baghdad international airport on the order of US President Donald Trump.

© REUTERS / Nazanin Tabatabaee/WANA
An Iranian man holds a picture of late Iran's Quds Force top commander Qassem Soleimani, during the commemoration of the 41st anniversary of the Islamic revolution in Tehran, Iran February 11, 2020

The White House claimed that it had targeted Soleimani over the threat he allegedly posed to US forces in the region, while Tehran described the general’s assassination as an act of international terror. Iran retaliated on 8 January, when it launched missile strikes targeting two Iraqi facilities hosting US troops, which resulted in no deaths or serious injuries although the Pentagon has since admitted that at least 109 US service members have been diagnosed with traumatic brain injuries.

Tensions between Washington and Tehran have been rising since Trump announced in 2018 the US’ unilateral withdrawal from the 2015 Iran nuclear deal, also known as the Joint Comprehensive Plan of Action (JCPOA).

The US then unveiled rounds of sanctions against Iran, targeting its economic, financial and transportation sectors, among others. The situation worsened when Iran announced on 8 May 2019 that it had partially discontinued its commitments under the JCPOA, giving Europe two months to ensure Iran's interests were protected under the deal.

The bilateral relations worsened further after a series of attacks on oil tankers in the Persian Gulf and the Gulf of Oman last summer. The US immediately blamed the sabotage on Iran and boosted its military presence in the Middle East region, while Tehran denied  Washington’s allegations.

In the wake of the attacks, US President Donald Trump ordered the warship Mason to be dispatched to the area, adding to the US’ already significant military presence in the region.

Pompeo, for his part, repeatedly emphasised that the Trump administration does not want a war, but that Washington seeks to deter Iran from “further aggression in the region”.

Similarly, Iran Supreme Leader Ayatollah Ali Khamenei  underscored that Tehran does not intend to wage war with Washington, but that it will continue to resist the US presence in the region.

Saudi Arabia, US to Cooperate on Ensuring Security of Oil Deliveries – Reports