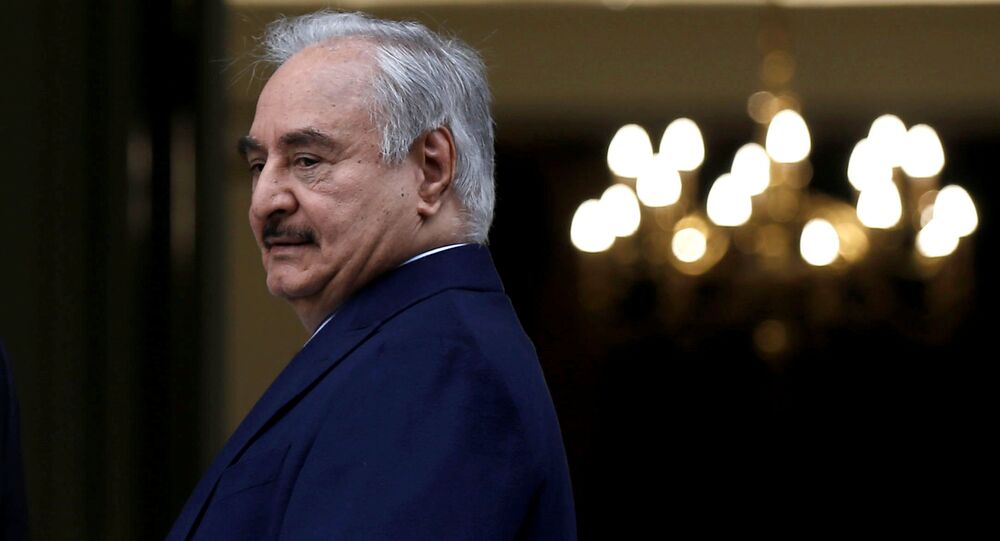 An international conference on the resolution of the Libyan crisis, attended by Russia, the US, Turkey, Egypt as well as the EU and the UN, took place in Berlin on 19 January. The participants of the gathering urged the warring parties to put a halt to fighting in the war-torn country.

Field Marshal Khalifa Haftar, Commander of the Libyan National Army, has set out conditions to ensure a ceasefire in the country. Haftar says that Syrian and Turkish mercenaries must pull out from the country and Ankara must halt the supply of arms to Tripoli.

"Unfortunately, a temporary ceasefire is being used by Turkey and the [Tripoli-based Prime Minister Fayez] Sarraj government to transfer a large number of Syrian mercenaries, Turkish soldiers, terrorists, and weapons to Tripoli by sea and air. It is a violation of the ceasefire," the LNA commander said.

Haftar went on to say that his country has the right to confront the Turkish invasion since it is now occupied by the forces of a foreign state.

"Our right is guaranteed by international law. This has nothing to do with the Algerian Foreign Minister being in Tripoli or the Libyan Joint Military Commission meeting. We adhere to the conditions (the ceasefire); our responding to its violation doesn’t mean that we ourselves have violated it," he said.

The military commander said that the LNA supports the European Union countries’ naval patrols that prevent Turkey from transporting weapons and fighters to Tripoli.

"The EU should fulfill its role in controlling the flow of arms transported through Turkey to Syrian and Turkish terrorist mercenaries in Tripoli. We support the actions of European maritime patrols that will prevent Turkey from continuing to supply arms and transport mercenaries to Tripoli," the marshal said.

Haftar went on to say that the Tripoli-based Government of National Accord (GNA) led by Prime Minister Fayez Sarraj had suspended its participation in the UN-sponsored Geneva talks on orders from Turkey and Qatar.
"Sarraj receives orders from Ankara and Doha, and he can do nothing with it. The evidence is [Turkish President Recep Tayyip] Erdogan’s statements, in which he stressed the need for the GNA to withdraw from the Geneva talks," Haftar said.

The LNA commander added that Sarraj’s GNA was dependent "on militias and terrorist groups" in Libya as well as on Turkey and Qatar.

According to Haftar, the LNA is open to all peace initiatives that could achieve security and stability on Libyan soil and supports actions conducted by the UN Support Mission in Libya and its head Ghassan Salame.

"It is the UN support mission in Libya that determines the timing for the political committee’s negotiations as one of the tracks of the Geneva talks. We are open and positive about all the tracks that will help achieve peace, security and stability in Libya; and we support the UN mission and special envoy Ghassan Salamé," Haftar added.

At the same time, he stressed that the LNA is losing patience over the rival GNA breaching the truce.

"Our patience is running thin regarding repeated truce breaches by [Recep Tayyip] Erdogan and [GNA Prime Minister Fayez] Sarraj's mercenaries and their failure to fulfill their Berlin obligations," Haftar said.

The marshal said that the armed forces are assessing the situation in Tripoli; they’re in contact with foreign parties and are ready for whatever comes if the international community and the participants to the Berlin Conference don’t assume their responsibilities with regard to the Turkish occupation of our country.

"We cannot sit idly by. And if the Geneva talks don’t establish peace and security for our country, and the mercenaries don’t return to where they were brought from, of course, the armed forces will fulfill their national and constitutional duty to protect citizens, the country’s sovereignty and borders from Turkish invaders and ‘dreamer’ Erdogan’s ambitions regarding Libya," Haftar concluded.

On Wednesday, the GNA suspended intra-Libyan talks on military issues in Geneva in response to the LNA's shelling of the port of Tripoli on Tuesday. Meanwhile, Haftar’s armed forces have said they had targeted a weapons and ammunition depot in Tripoli in response to ceasefire violations committed by terrorist groups.

Since Libyan leader Muammar Gaddafi was deposed and murdered in 2011, Libya has effectively sunk into chaos. The North African nation currently has two governments. The east is controlled by an elected parliament acting independently from Tripoli and allied with Khaftar's army. The western part of the country, including the capital, is under the control of the Government of National Accord, backed by the UN and the European Union.