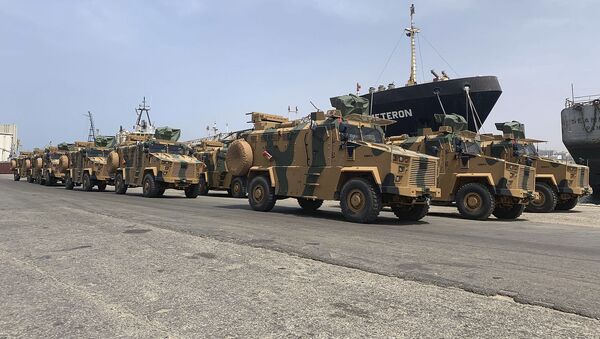 © AFP 2022 / -Media Bureau of "Volcano of Anger" operation
Subscribe
Ankara has accused Libyan National Army Commander Khalifa Haftar of violating the Libyan ceasefire, and has deployed troops and mercenaries to the country to shore up the Tripoli-based Government of National Accord.

Abdulhadi al-Hweij, foreign minister of the Tobruk-based Libyan government, has accused Turkey of not only interfering in Libya's internal affairs, but of seeking to conquer the North African country.

"This is not interference, but aggression by Turkey. This is another attempt by Turkey to conquer Libya. We will use all available means to protect our territory and involve all Libyans," al-Hweij said, speaking to reporters in Moscow on Monday on the sidelines of the Valdai Discussion Club's Middle East Conference.

The official vowed that the Tobruk-based government would use all means necessary to thwart Turkey's attempt to conquer the country.

Commenting on the recent claims by Turkish President Recep Tayyip Erdogan suggesting that Russian private military companies were operating in Libya, al-Hweij said these allegations were false, and that Erdogan was "losing his mind." 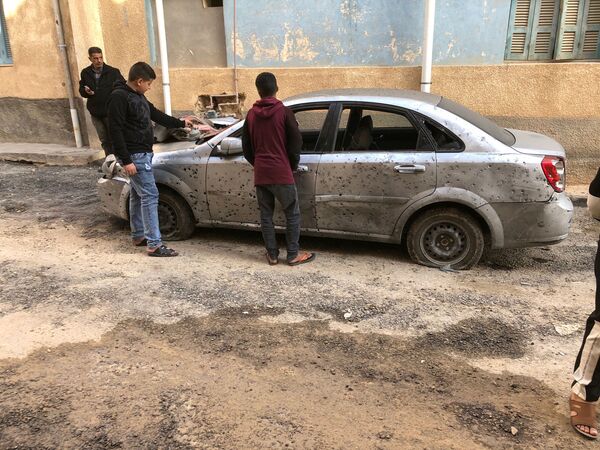 Libyan boys check a damaged car after a shell fell on a residential area at Hadba al-Badri district, in Tripoli
© REUTERS / ISMAIL ZITOUNY

According to Al-Hweij, his government would be prepared to carry out peace talks in Moscow at some point in the future. The official invited Russian companies to help rebuild the country after peace is restored.

"Undoubtedly, I welcome the role of Russia, as a great power and permanent member of the United Nations Security Council, in settling the Libyan crisis. A conference on security and peace in Libya may take place in Moscow just like in any other capital in Europe and the world," al-Hweij said.

Libya degenerated into a foreign-backed civil war in 2011, after militants inspired by the so-called 'Arab Spring' protests took up arms against long-time Libyan leader Muammar Gaddafi. With the help of NATO air power, the militants defeated and executed Gaddafi, with the Libya quickly turning into a failed state rife with competing militias, criminal gangs and terrorist groups. Since then, two competing governments - the western, Tripoli-based Government of National Accord and the eastern, Libyan National Army-backed Tobruk government, have established themselves in a competition for power.

On January 19, officials from the competing government met in Berlin to discuss an end to the conflict, agreeing on a ceasefire and the need to ensure the non-involvement of outside third parties in the conflict.

On Saturday, Turkish Foreign Minister Mevlut Cavusoglu accused Libyan National Army Commander Khalifa Haftar of constantly violating the Libyan ceasefire, and saying his efforts to resolve the conflict by military means "must be stopped." Turkey sent a contingent of military advisors and instructors to Libya last month, insisting that their presence was legitimate and based on an agreement with Tripoli.