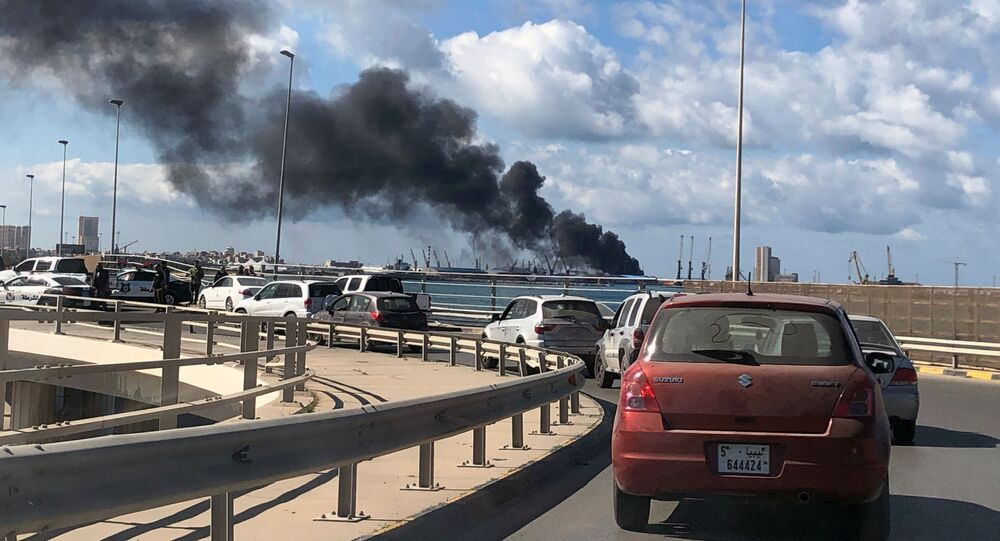 The Libyan National Army (LNA) said in an official statement on Facebook earlier that its forces had destroyed a Turkish vessel carrying weapons and ammunition that was docked in the port of Tripoli. According to the LNA, by delivering the cargo, Turkey had violated an international agreement banning arms sales to the country.

The Libyan Government of National Accord (GNA) said in a statement it was suspending the UN-mediated talks in Geneva following the recent attack in the port of Tripoli.

"We announce the suspension of our participation in the talks on military issues taking place in Geneva until a firm stand is taken regarding the aggressor and its violations", the statement said.

The International Conference on Libya took place in Berlin earlier in January, with Prime Minister of the GNA ruling in Tripoli Fayez al-Serraj and LNA commander Klaifa Haftar both attending, but it did not succeed in bringing the two warring sides together for direct talks. The conference resulted in a call for a ceasefire and maintaining the weapons embargo, while also in the agreement on the noninvolvement of third parties in the conflict.

The formation of the Intra-Libyan Joint Military Commission was also announced in Berlin, with the aim of negotiating a full ceasefire in the war-torn country.

Earlier in the day, National Oil Corporation (NOC) of Libya confirmed it had ordered the urgent evacuation of all fuel vessels from Tripoli port and cancellation of all offloading operations after projectiles struck meters away from a highly explosive liquified petroleum gas (LPG) tanker in the port.

Spokesman of the Turkish President Ibrahim Kalin said Tuesday Ankara could not confirm claims that its vessel had been destroyed in the port of Tripoli.

Ankara has repeatedly expressed support for the UN-endorsed GNA, which currently controls the western part of Libya. The Tobruk-based government, supported by the LNA, has accused Turkey of trying to conquer the country.

The country has been divided since 2011 after former leader Muammar Qadaffi was killed and Libya was dragged into a civil war.