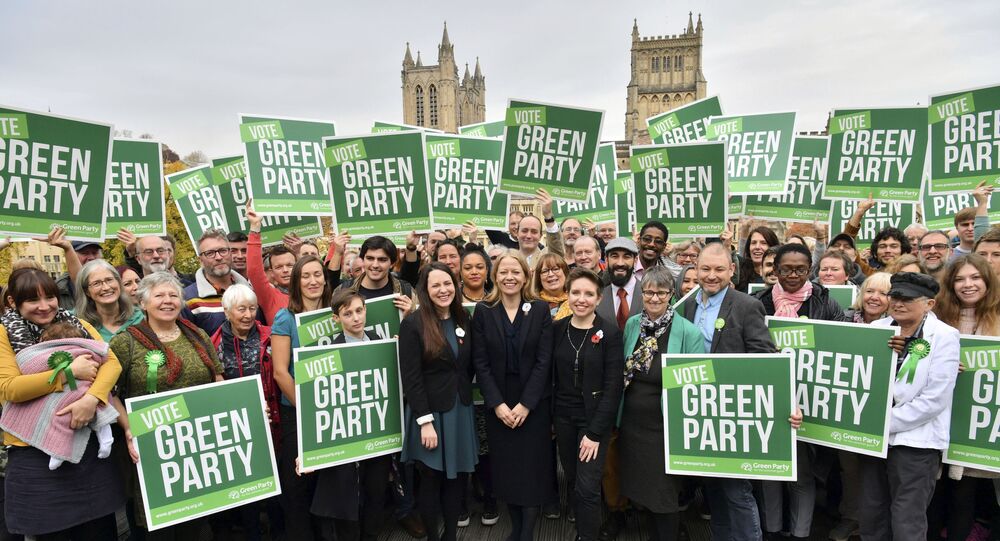 The Green Party had hoped to win at least five percent of the popular vote at last week’s General Election and double or even triple the number of MPs it had in Parliament. But they failed miserably as Brexit, not Climate Change, proved to be the biggest issue to voters.

The General Election was an unmitigated disaster for the Labour Party - whose leader Jeremy Corbyn is expected to apologise when he meets MPs on Tuesday night - and the Liberal Democrats, but it was also a huge failure for the Green Party.

They may have increased their votes from 300,000 in 2017 to 865,697 but they failed to get anywhere near winning a second seat in Parliament and in most constituencies their candidates got less than four percent of the vote and lost their £500 deposit.

© Sputnik / Demond Cureton
An activist holds a banner on climate change as protestors stage a sit in at a major road at Trafalgar Square in London, UK

With Extinction Rebellion protests on the streets of London and dire warnings about the Climate Emergency facing the planet, the Greens had hoped 2019 would see an electoral breakthrough in Britain.

But they got only 2.7 percent of the popular vote nationwide and Caroline Lucas, in Brighton, remains the only Green Party MP.

They got 24 percent of the vote in Bristol West - but only after the Liberal Democrats agreed to stand aside - but were still almost 30,000 votes behind Labour’s Thangam Debbonaire.

The Greens had seriously harboured hopes of winning the Isle of Wight but they only got 15 percent of the vote - down on 2017 - and finished third behind Labour and the re-elected Tory MP Bob Seely.

Their number one target in London was Dulwich and West Norwood where their vote shot up from 2017 and they overtook the Tories but they still ended up 27,000 votes short of victory.

Across Britain, it took...

​​The Green Party’s co-leader, Sian Berry, said on Friday, 13 December: “The Green Party piled on votes because this was a climate election - we set the agenda and we won the argument on massive investment in a green new deal. If Boris Johnson wants to unlock Britain’s potential, he must flood every region of this country with investment to kickstart a renewables revolution, retrofit millions of homes and build up decent local transport. We haven’t got five more years to waste.”

But Boris Johnson has a majority of 78 in Parliament and will not feel the need to listen to the Green Party’s one MP or anyone else.

One of the abiding memories of the General Election campaign was Boris Johnson snubbing Channel 4’s climate change TV debate and being replaced by a block of ice.

He has made it clear “getting Brexit done” is his priority, and while he made a nod in the direction of the “climate emergency” in the TV debates, the Tory manifesto was far less radical than Labour’s or the Lib Dems’ on the green agenda.

The Tories, for examples, pledged to plant 30 million trees a year until 2024 while the Lib Dems said they would plant twice as many and continue until 2045 and Labour said it would cultivate two billion trees by 2040.

The Conservatives have said Britain would hit the zero emissions target by 2050 - 20 years later than Labour and the Greens.

Five times more Green voters on the #IsleofWight than the average Green vote in the rest of the UK. An election when Climate was foremost in the minds of many, but still FPTP means we have no new Green MPs. We need electoral reform #MakeVotesMatterhttps://t.co/RuBNIC5tzk

​Zack Polanski, the Green Party's candidate in the Cities of London and Westminster constituency, said last month he believed part of the reason Extinction Rebellion had not been prominent in Germany was because the Green Party had a significant presence in the Bundestag.

On Tuesday, 17 December, he said: "It's clear we need Proportional Representation. The Conservative Party increased their vote share just one percent but then achieved a landslide. Green Peer Jenny Jones has also said that the Labour Party were offered a huge deal by the Green Party for us to stand down in most of our seats in return for a commitment to Proportional Representation but the Labour Party refused. It needs to pick its new leadership very carefully and choose someone who will enthusiastically engage in the democratic reforms needed for a fair society."

With the Green Party’s failure to make any sort of electoral breakthrough, expect the Extinction Rebellion protesters to return soon and perhaps to become more violent as their frustration grows.