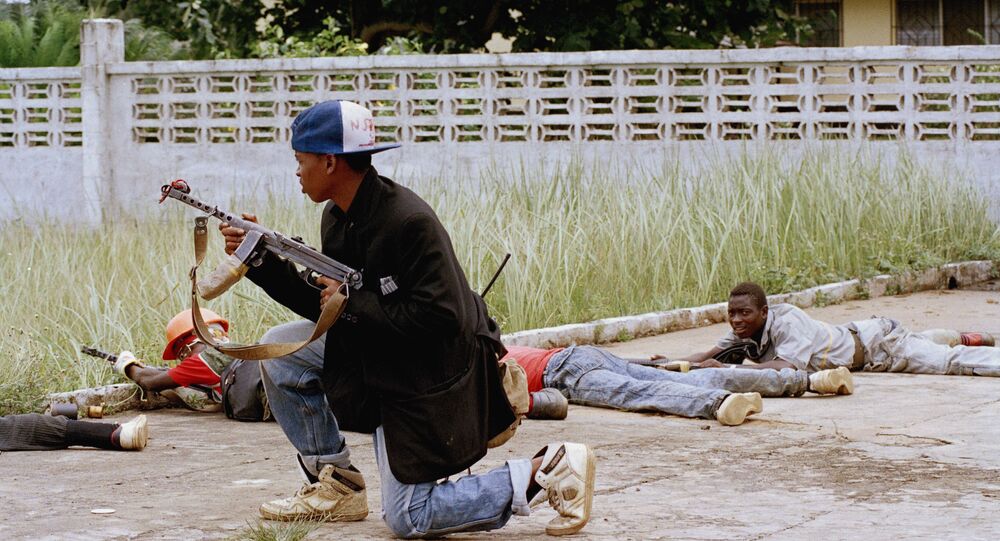 Between 1989 and 1997 the African nation of Liberia was torn apart by a brutal civil war, which ended when warlord Charles Taylor became president. He was ousted in 2003 and nine years later was convicted by a UN court in The Hague.

The wife of Liberia’s former President Charles Taylor is set to walk free after a judge in London ruled she could not be prosecuted under English law.

In June 2017 Agnes Reeves Taylor, who had been working as a university lecturer, was arrested at her home in Dagenham in east London and charged with eight counts of torture dating back to 1990.

​​Crucially the charges were brought under section 134(1) of Britain’s Criminal Justice Act 1988, which governs the conduct of a “person acting in an official capacity”, such as a government official.

At the time rebels from Charles Taylor’s National Patriotic Front of Liberia (NPFL) had conquered most of the north of the country and set up their headquarters at Gbarnga, deep in the interior and location of each thing

In his ruling on Friday, 6 December, Judge Nigel Sweeney QC said: "My decision was a close run thing...I have asked myself...where there is sufficient evidence...upon which a jury could properly conclude that at the time and location of each offence the NPFL was exercising governmental function in the relevant area. In my view the answer, in each instance, is clearly in the negative."

The conflict was based on tribal loyalties.

The war crimes case against Agnes Taylor, ex-wife of the former Liberian dictator Charles Taylor, has ended before going to trial.

She just won a technical appeal against charges of torture, with an Old Bailey judge dismissing all eight counts pic.twitter.com/PjA9ROvOnU

Liberia’s then President, Samuel Doe - who had come to power in a brutal coup in 1980 - drew his support from the Krahn and Mandingo tribes and discriminated against the Gio and Mano, who rose up and backed the NPFL.

In 1990 many people were flying the fighting and seeking refuge in neighbouring Guinea.

At a hearing at the Old Bailey on 27 November, Paul Rogers a senior prosecutor who has worked at the United Nations International Criminal Tribunal for the Former Yugoslavia, went through the events outlined in the indictment.

He read from the statements of a number of journalists - BBC reporter Elizabeth Blunt, photographer Patrick Robert and author Richard Stryker - who had covered the Liberian civil war and who witnessed checkpoints in Nimba county in 1990.

Taylor, wearing glasses, a white blouse and a pearl necklace with a Christian cross on it, listened intently by videolink from Bronzefield Prison, just outside London, where she was being held.

Mr Rogers said in May 1990 the NPFL captured the town of Kakata and the frontline moved closer to the capital, Monrovia.

He said that on 17 July 1990 NPFL rebels were manning a checkpoint at Careysburg, examining civilians’ paperwork and especially looking for Krahn or Mandingo men who “could be soldiers”.

Human Skulls On Sticks At Checkpoint

Stryker mentioned an occasion when he passed through Gborplay, on the border with Cote d’Ivoire, where NPFL soldiers aged around 16 or 17 were manning a checkpoint, which was decorated with human skulls on sticks.

Stryker said he became worried about his own safety because Agnes Taylor, who was travelling with him, started arguing with the young rebels, who were all armed with guns.

Another journalist, Moses Kotia, was at a crossing near the Guinea border, where NPFL rebels were looking for Krahn and Mandingo people and supporters of President Doe and he said there were “dead bodies everywhere”.

He said a large group of women and children were passing through the town of Ganta, seeking refuge in Guinea.

Reading from his statement, Mr Rogers said: “At this point the defendant intervened and shouted: ‘Why are you seeking refuge? Why should these people go to Guinea? Are they more important than us?’”

The witness said several of these women became sex slaves to the NPFL forces and at least one was shot.

Mr Rogers said there is no doubt that people from the Gio and Mano tribes were also being “ruthlessly suppressed” by President Doe’s forces at the time.

Taylor’s barrister, Jonathan Laidlaw QC, argued she could not be prosecuted under the 1988 Act and referred to the UK Supreme Court’s recent ruling on the case.

Section 134 of the Act allows for people to be tried for torture in the UK no matter where the crime was committed but only where the act was committed by “a public official or person acting in an official capacity.”

Mr Rogers said: “The NPFL was a rebel organisation which was exercising the functions of government, one of which was the provision of relief. It’s clear there was discriminatory targeting of individuals. When you are the only power in an area, when you are the only law, if you use that authority to target civilians then that is not a military activity, the target itself is wrong and it is a criminal activity….there was no need for legislation. You had the law of the gun.”

He said: “Depriving someone of their liberty is a matter for governments normally. There is no military justification for it, especially with women and children. The reality of the evidence is that there was no government at all (in Nimba county), only its replacement by the NPFL…she was a de facto government official in an area where the NPFL was acting as an authority. In fact the NPFL’s intention was to form its own government.”

Mr Laidlaw responded: “All this activity occurred during the civil war, which was still in progress. Not only was there no government authority in Nimba or Bong counties, officials having been driven out, but there was nobody in that area in control. How on earth would you issue directions to a jury as the prosecution sought to argue?”

Although President Doe was killed in September 1990, the first Liberian civil war carried on for another seven years before Charles Taylor was elected President.

But a second civil war broke out two years later and Taylor, who had been heavily involved in a bloody conflict in neighbouring Sierra Leone, was ousted and forced into exile in Nigeria.

Taylor, who is now 71, was later put on trial by the Special Court for Sierra Leone and in 2012 became the first former African head of state to be convicted of war crimes. He is now serving a 50 year sentence in Frankland, a high security prison in Durham, England.

It is not clear what will become of Agnes Taylor, who is believed to have been given asylum in Britain prior to her arrest.

In September this year the current President of Liberia, former international football star George Weah, endorsed the setting up of a tribunal to adjudicate on war crimes committed in the country during the two civil wars.

Adama Dempster, from the Secretariat for the Establishment of a War Crimes Court in Liberia, said: “President Weah’s support for a war crimes court is an important step for victims and for helping to ensure the violence that brought so much pain and loss to Liberia will not happen again. This decision benefits the victims, the country, and the rule of law in Liberia.”

Mr Rogers told reporters on Friday, 6 December, Agnes Taylor could conceivably be extradited to Liberia to stand trial there for war crimes.

If Agnes Taylor were to be sent back to Liberia to be tried by the new war crimes court she could be joined by two former generals with the ULIMO rebel group - which fought against Charles Taylor between 1999 and 2003 - Kunti Kamara, who has been detained in France and Alieu Kosiah, who is held in Switzerland.

Another ULIMO commander was Joshua Blahyi, known by his nom de guerre General Butt Naked, who admitted killing 20,000 people but has since become a Christian preacher.

One key figure, Prince Yormie Johnson, a one-time ally of Taylor, is now an elected Senator for Nimba County. Johnson famously presided over the video-taped torture and murder of Doe, after he was captured by rebels.