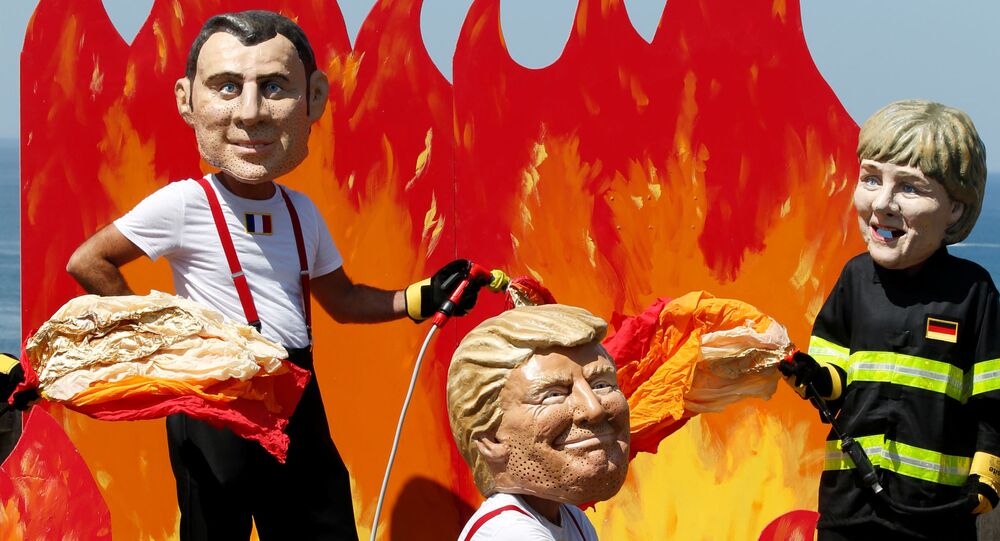 The G7 summit in France comes against a backdrop of disputes between the EU and the US, including the two’s standoff over higher tariffs introduced by President Donald Trump last year.

French President Emmanuel Macron has called for launching a fully-fledged reform of the the current international order, including business relationships.

Speaking at a meeting with businessmen in Paris ahead of the G7 summit on Friday, Macron specifically underscored the need for international companies to join efforts to reform the current system. Macron added however that “the model to be developed will by no means mean the termination of the market economy system.”

“That said, one must admit that this model has become rusty as a result of the fact that the democratic system itself has been degraded,” Macron added.

He noted that capitalism had also been degraded and “gone mad because we ourselves generate those manifestations of inequality, which we are then unable to resolve.”

The remarks follow Macron’s criticism of a US business model, which he argued was getting out of “democratic control.”

“The US [… has] a model today which is completely driven by big private actors who are therefore no longer under democratic control, in a way. So there is no longer a government in the US that can guarantee independent, real policies like climate change,” said Macron during a Q&A session at a tech summit in Paris in mid-May.

The G7 summit kicked off in the French resort of Biarritz on Saturday. Speaking at the gathering, European Council President Donald Tusk warned that the summit would be a “difficult test of unity and solidarity” among EU members amid various trade conflicts.

He added that such conflicts have the potential to further damage “already weakened trust” among G7 members, and that the past year has shown that it is “increasingly difficult” for countries to find a common language.

The summit comes as the EU and the US remain at odds over a spate of moves taken by the current US administration, which range  from the withdrawal from the 2015 Iran deal and the re-imposition of sanctions against the Islamic Republic, which has impacted on European companies, to introducing higher import tariffs, which has escalated into a trade rift.

The tariff war broke out in 2018 when President Donald Trump imposed higher taxes on steel and aluminium imports.

With the new measure temporarily suspended, Brussels has worked out a counter-plan to grapple with potential US tariffs on EU cars which stipulates the imposition of extra duties on up to €35 billion ($39.1 billion) worth of US goods.

“We will not accept any managed trade, quotas or voluntary export restraints and, if there were to be tariffs, we would have a rebalancing list,” European Trade Commissioner Cecilia Malmstrom said, voicing hope that the EU does not have to resort to the measure.