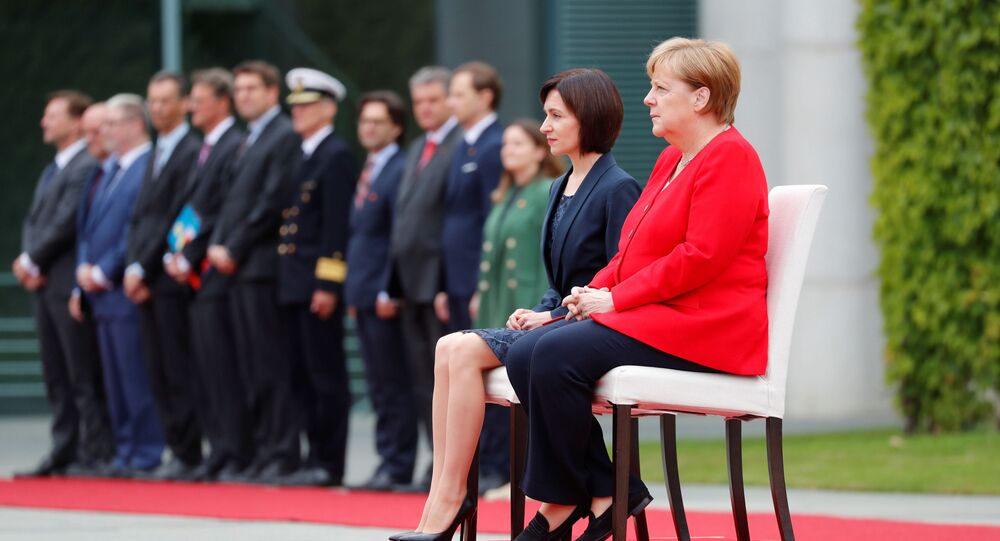 Last week, German Chancellor Angela Merkel and Danish Prime Minister Mette Frederiksen sat down for national anthems although the protocol would usually require them to be standing.

German Chancellor Angela Merkel has once again broken the protocol by sitting during the national anthem as she received new Moldovan Prime Minister Maia Sandu on Tuesday.

In the latest case concerning Angela Merkel's health issues, the German chancellor was seen breathing heavily during her brief statement at the Palais Beauharnais on 14 July. The government spokesman Steffen Seibert, however, explained that Merkel was climbing the stairs quickly in order to reach the waiting journalists.

Germany’s chancellor has suffered several public trembling episodes for the last month. The first episode occurred in mid-June, when she could be seen shivering next to Ukrainian President Volodymyr Zelenskyy, was explained by her team as dehydration on a hot day.

A week later, the senior official was captured on a video, shaking at a meeting with German President Frank-Walter Steinmeier.

Last week, Merkel suffered a new bout of tremors at a meeting with Finnish Prime Minister Antti Rinne in Berlin.

Later on, the German chancellor and Danish Prime Minister Mette Frederiksen broke the protocol by sitting during the national anthem. According to media reports, Merkel was the one to ask for the change.