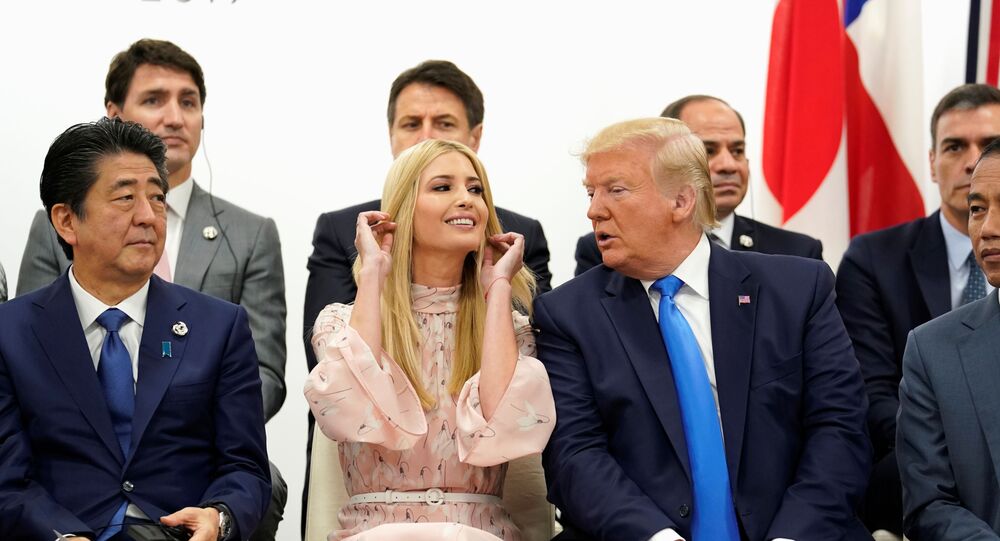 Ivanka Trump’s meme-worthy conversation with world leaders at last week’s summit in Osaka has been doing the rounds on social media, but her father insists that world leaders loved her, despite acid-tongued commenters claiming the opposite.

Donald Trump has praised the diplomatic skills of his eldest daughter, Ivanka, following a wave of criticism over her appearance at the G20 summit.

"I thought Ivanka was amazing at the G20," Trump told reporters outside the White House on Friday, insisting that “the foreign leaders loved her. And they just think she's great."

The POTUS added that Ivanka, who serves as his senior White House adviser alongside her husband Jared Kushner, is "very smart and she's done a great job."

Ivanka and Jared "work very hard and they sacrificed a lot to be doing this, but they want to do it,” the president said.

He went on to boast that his daughter, who focuses on jobs and economic empowerment of women in her White House role, “has worked on almost 10 million jobs, training and going to companies and getting them to hire people.”

But plenty of people begged to differ, arguing that Ivanka was out of place at the summit.

Fact check: they literally rolled their eyes at daddy's little girl pretending she was one of them

Actually, the leaders snubbed her when she tried to butt into their conversation. FAKE PRESIDENT DONALD PLUMP LIES AGAIN!

Oh yes, they "loved" Ivanka. You could see and hear their love.

Ivanka Trump, 37, accompanied her father during last week’s trip to Japan for the G20 grand gathering and to the demilitarised zone between the two Koreas.

At the global summit, she sat alongside her father and Japan’s Prime Minister Shinzo Abe at an event on women's empowerment where she gave an address to world leaders.

But her somewhat awkward interactions with fellow G20 participants were met with mockery on social media.

A now-viral clip, published by the French president’s office, showed Ivanka seemingly trying to inject herself in a chat between Emmanuel Macron, Theresa May, Justin Trudeau, and IMF chief Christine Lagarde on the side-lines of the summit.

The leaders – Lagarde in particular, who was filmed pursing her lips as Ivanka spoke – did not appear to be enthusiastic about the presence of Donald Trump’s daughter, who managed to insert a remark about the “male-dominated” defence industry.

Ivanka Trump appears to be trying to get involved in a talk among Macron, May, Trudeau and Lagarde (IMF head).
The video is released by French Presidential palace. pic.twitter.com/TJ0LULCzyQ

The clip has spawned a plethora of memes and even inspired the #UnwantedIvanka hashtag on Twitter.

Macron’s office admitted that the backlash was not expected at all and that the clip was not meant to embarrass the First Daughter. It added that the post emerged against the backdrop of “a larger narrative in the US about Ivanka’s diplomatic role and that goes beyond us.”