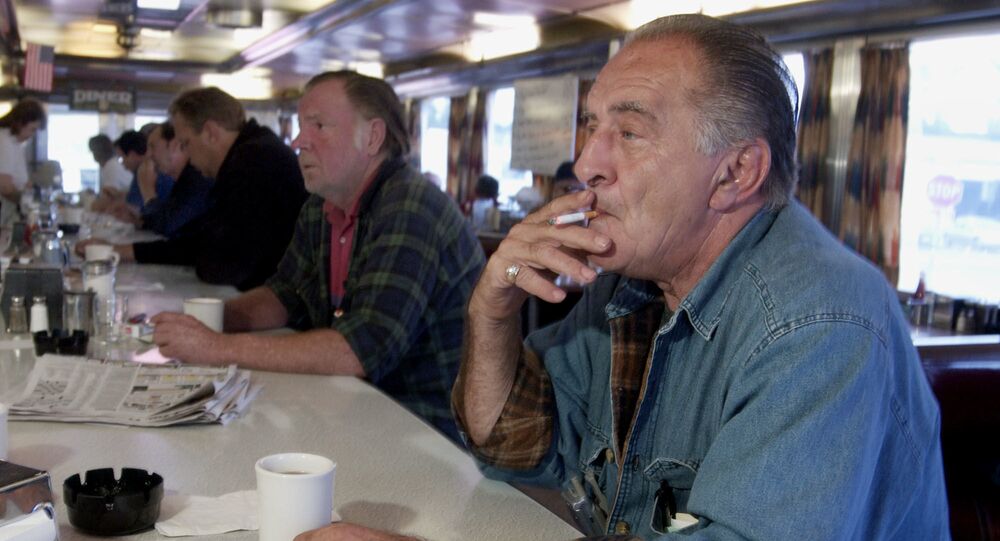 Netflix has pledged to reduce the number of scenes of actors smoking in its programming. But they insisted they were committed to "artistic expression" and "historical accuracy". Sputnik looks back at the first 90 years of the 20th century, a halcyon era for smokers.

Netflix’s action follows a report by the Truth Initiative which found smoking on TV had gone from being "common to nearly unavoidable" with Stranger Things and Orange Is The New Black specifically cited.

The report said Netflix showed "much more tobacco" than equivalent shows on US TV or cable.

Netflix said smoking in programmes aimed at younger people would only be allowed for "reasons of historical or factual accuracy" or if "it's essential to the creative vision of the artist or character-defining."

So for historical accuracy, how often did people smoke and where?

In 1948 around 82 percent of British men and 44 percent of women smoked, with the majority being cigarette smokers.

Smoking was equally popular in the rest of Europe and North America and was growing in popularity in the developing world.

With the exception of petrol stations and other hazardous environments, smoking was culturally accepted everywhere.

On long journeys it was considered inhumane to prevent a smoker from lighting up, so smoking was widespread right up until the 1980s. 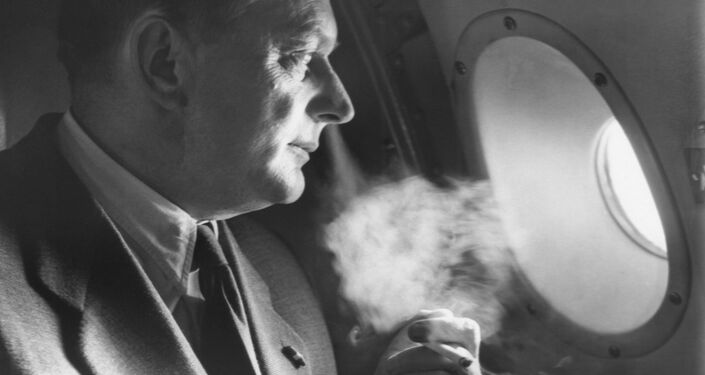 © AP Photo / Hans Von Nolde
Dr. Balint Rozza blows a cloud of smoke from his cigarette on a plane from Hungary to the US in 1956

According to Air & Space magazine, passengers would complain that their cigarettes tasted different because the thinner air at altitude meant they burnt slower.

United Airlines would provide complimentary cigars on their men-only service but in 1971 they introduced smoking and no-smoking compartments of their planes because of complaints from passengers and growing health concerns.

In 1969 consumer advocate Ralph Nader sued the US Department of Transportation, demanding a complete ban on smoking on planes.

Safety fears were only raised after a Brazilian airliner, Varig 820, was forced to make an emergency landing near Paris’s Orly airport after a fire broke out on board. The blaze, which is thought to have started in the toilet when a smoker failed to extinguish his cigarette, killed 123 people with only 11 survivors.

But it was only in 1996 that the US government banned smoking on all flights to and from the US.

Most airlines banned smoking during the 1990s and the last airline to stop people lighting up was the Cuban national carrier, Cubana, in 2014.

On Trains, Including on the Underground

Smoking had been allowed on the London Underground ever since it was first built in the 19th century.

Smoking on the trains themselves was banned in 1984 but it was still permitted in the stations.

But on 18 November 1987 a passenger discarded a match as they ascended on one of the wooden escalators at King’s Cross station, it fell through the cracks and lit a large pile of rubbish which had accumulated underneath.

The ensuing fire killed 31 people and led to a complete ban on smoking in the London Underground.

Smoking on UK trains was phased out much later and smoking is still allowed on trains in many parts of the world.

In Restaurants and Bars

Smoking in public places, like bars, restaurants, shops and offices, came into force in England on 1 July 2007, a year after similar legislation was introduced in Scotland.

Three weeks later James Oyebola, a former boxer turned doorman, was shot dead by a man in a west London nightclub after asking a man to stop smoking.

​Critics say the ban speeded up the closure of pubs, although there is little evidence for this and some people said they actually visited licensed premises more after the clouds of smoke were removed.

Some countries stubbornly hold out against smoking bans - Austria’s parliament finally voted to ban smoking in public places earlier this week, while in Slovakia smoking areas can stretch to 50 percent of the floor area of a bar or restaurant.

In the United States the law varies wildly from state to state, with the tobacco-growing states of Georgia, Kentucky, North Carolina, South Carolina, Tennessee, and Virginia being the most tolerant of smoking and California and New York having some of the strictest laws in the world.

Smoking was allowed in the general wards of most UK hospitals up until the 1980s, when special smoking rooms were introduced.

It was only later that smoking was banned from hospital premises, with safety and health concerns being the main reasons.

In 1991 the Joint Commission on Accreditation of Healthcare Organizations ordered all accredited hospitals in the US to smoke-free by 31 December 1993. The following year a report suggested 96 percent had complied.

But smoking is still allowed in some UK psychiatric hospitals, with an ongoing debate about whether it is more or less harmful for mentally ill patients for them to be banned from smoking.

In May 2019 Public Health England found 31 percent of NHS acute trusts had not yet enforced total smoking bans across hospital premises.

Public Health Minister Seema Kennedy said: “No one should have to walk past a cloud of smoke in order to enter or leave their local hospital – we must lead by example, and I am determined to see a smoke-free NHS by 2020.”

Smoking in schools, colleges and universities was globally accepted right up until the 1990s.

In 1984 the Irish Health Minister Barry Desmond wrote to the Taoiseach, Garret FitzGerald, to suggest banning smoking in schools in the Republic of Ireland.

​In a briefing note he wrote: “Smoking is not forbidden for teachers while they are on duty but it is not encouraged, and teachers are expected to refrain from smoking in classrooms.”

Ireland went ahead and banned smoking in schools and the UK and several other European countries followed suit, although teachers were allowed to have smoke breaks outside until very recently.

Smoking was banned in UK football stadiums in 2008, almost 20 years after a discarded cigarette or match was blamed for causing a fire at Bradford City’s Valley Parade stadium that killed 56 people.

But many European stadiums continue to allow smoking, partly because of the insistence of club managers who enjoy smoking while watching games, often from the coach’s bench.

Last season Chelsea boss Maurizio Sarri hit the headlines when he was spotted apparently smoking on the touchlines during a game at Newcastle.

Sarri left at the end of the season and has returned to Italy to coach Juventus, confident he can smoke without causing a media storm.

Smoking was finally banned in prisons in England last years despite fears it would provoke violence among inmates.

Scotland introduced a ban on smoking in prisons last year, despite figures suggesting 72 percent of inmates smoked. Vaping is allowed.

In a report last year prison inspectors said a recent ban introduced at Leicester jail was believed to have led to a spike in violent attacks on prison officers and other inmates.