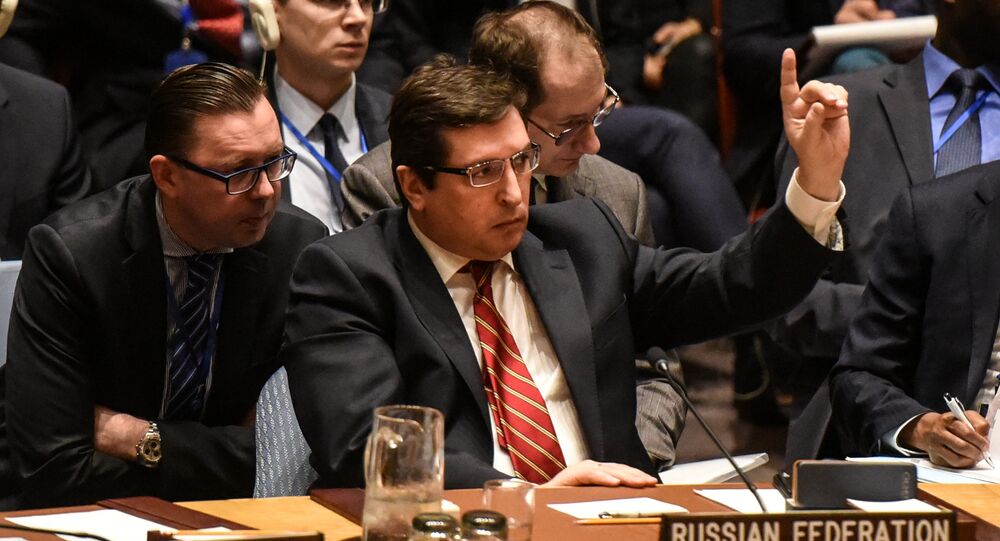 "Every delegation is appalled and deeply concerned about the attack, but beside it, there is a stalemate. There is a deficit of ideas on how to get out of this crisis", Safronkov said Wednesday.

Earlier in the day, the UNSC, at the request of the Peruvian mission, convened to address the airstrike attack on the migrant detention centre, in which at least 44 people were killed.

Safronkov said that during the closed consultations, diplomats called for the halt in the violence and the launching of a political process, yet did not present concrete plans to tackle the Libyan conflict.

Council members were briefed by UN High Commissioner for Refugees Filippo Grandi who noted that there are currently 27 refugee and migrant centres in the North African country and conditions there are dire.

"Many UNSC members were shocked by the briefing. There are 27 confirmed detention centres in Libya. Grandi said that the conditions in these facilities are concentration camp-like", Safronkov added.

On Wednesday, the UNSC failed to issue a press statement condemning the attack on the Tajoura migrant facility because the members did not agree on an element for the press, current UNSC President Gustavo Meza-Cuadro said.

The UN Stabilization Mission in Libya (UNSMIL) said earlier in the day that at least 44 people were killed and 130 severely injured as a result of the airstrike, reportedly carried out by forces loyal to Libyan National Army (LNA) chief Khalifa Haftar, on the Tajoura migrant detention centre.

On 4 April, Haftar ordered his forces to begin an offensive on Tripoli. Most recently, the LNA Air Force has bombarded the positions of various armed groups in different districts of Tripoli.

Since the overthrow and killing of Libya's long-time leader Muammar Gaddafi in 2011, the country has been gripped by conflict. Libya is now divided between two governments, with the country’s eastern part controlled by the LNA, and the western part governed by the UN-backed Government of National Accord (GNA).