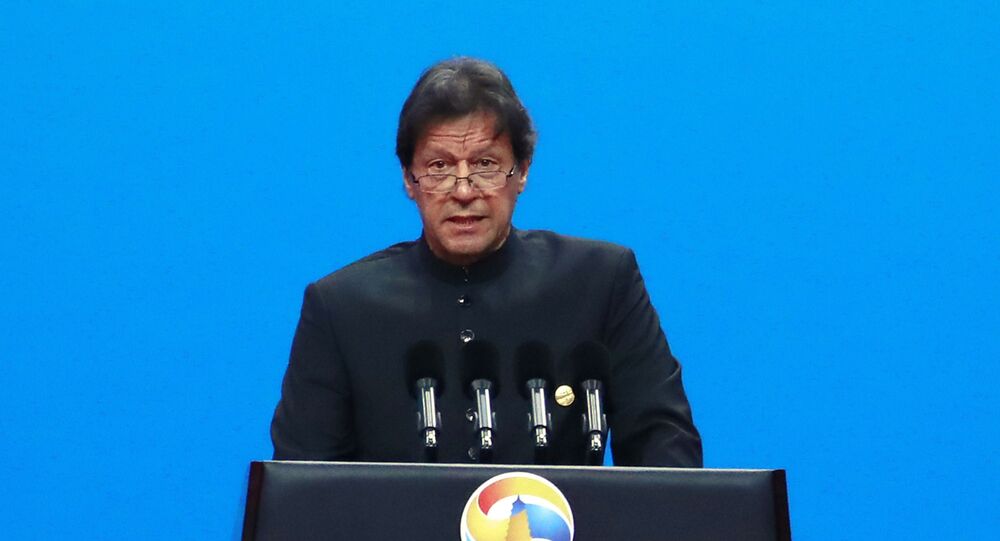 "My government believes that we want to be a country, which will bring countries together, which will play a part in reconciling differences between countries. But we would never want to be part of any country, which joins any war coalitions. We want to play a part in bringing countries together, and peace, and trade, so that we can have more harmony in this world. So I am an idealist and that is what I believe," Khan said.

The Pakistani prime minister stressed that the world should focus on eliminating poverty and boosting trade.

"The world should combine together to end poverty. It should reduce these tensions in the world. All the tensions that are going on in the Middle East … the Muslim world is suffering from some sort of war, some sort of bloodshed. And I’m a pacifist, who believes that military is no way of resolving issues in this world," Khan said.

© AP Photo / B.K. Bangash
Afghan Envoy to Return to Islamabad After Pakistan's Explanations - Ministry
"And Pakistan has suffered a lot in these last 10-15 years after joining the US war on terror. And we’ve suffered a lot," the prime minister added.

Islamabad is "trying everything" to help restore peace in Afghanistan and ensure that the Taliban movement is in contact with the Afghan government to that end, Imran Khan said.

"After Afghanistan, the country that is most wanting there to be peace in Afghanistan is Pakistan because war that happens in Afghanistan affects the border line, border areas of Pakistan as well. Hence it is in the interest of both countries that after these long almost 40 years of military action, civil war, foreign invasion we feel that people of Afghanistan deserve peace. So Pakistan will be trying everything and is trying everything to help there to be peace, so that the Taliban start talking," Khan said.

"They are already talking to the Americans, and we hope that the Taliban* will then talk to the Afghan government so that there is peace," the prime minister added.

Afghan government forces and the Taliban movement have long been engaged in an armed confrontation. The Taliban, who have previously seized vast territories in Afghan rural areas, are carrying out attacks across the country, and the Afghan security forces conduct regular counterterrorist operations against the insurgents.