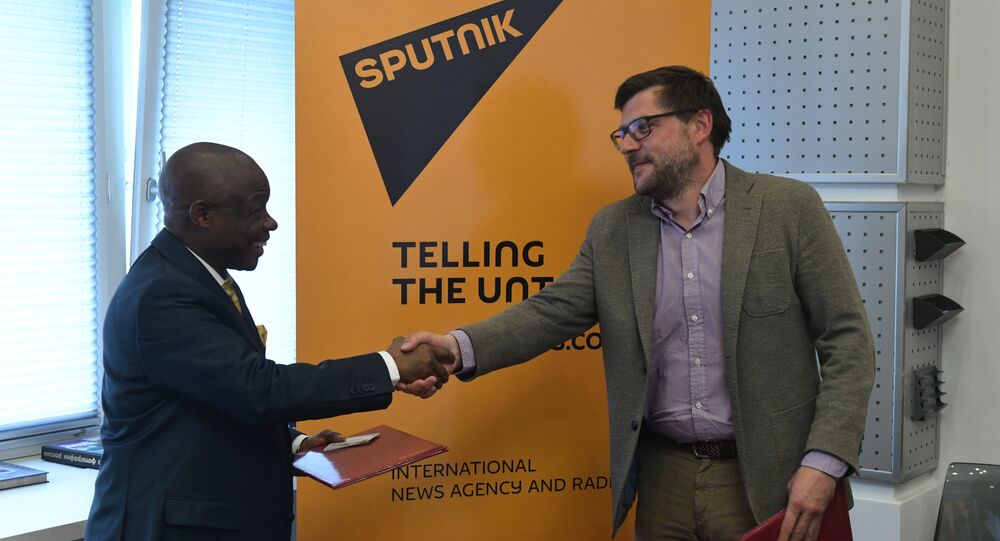 Sputnik Expands Its Presence in Africa

MOSCOW (Sputnik) - The Sputnik news agency and radio has entered into a cooperation agreement with the Congo’s national broadcaster, RTNC (Radio Television Nationale Congolaise). The signing ceremony took place in Moscow on Thursday as part of the Congolese delegation’s visit to Russia.

The agreement provides for regular exchanges of news content in English and French, including radio programs, joint projects and events. The parties also agreed to develop bilateral cooperation in the information space to strengthen relations between the two states.

“This is the first agreement Sputnik has signed with a media outlet in the Democratic Republic of the Congo. Forging partnerships with African media is one of our agency’s priorities. We hope that our joint work will provide our combined audience with first-hand information about events in Russia and the DRC,” Sergei Kochetkov said.

Ernest Kabila Ilunga commented: “We are very pleased to sign cooperation agreement between our media outlets. We also hope that this partnership will contribute not only to cultural but also economic and trade rapprochement between Russia and the Democratic Republic of the Congo”.

RTNC is one of the largest television and radio companies in the Congo. Its television network covers 70% of the country, while radio broadcasting reaches nine of the 26 Congolese provinces.

© Sputnik / Vladimir Astapkovich
Sputnik, UAE Official News Agency WAM Sign Memorandum of Understanding
Sputnik is one of the largest international media companies offering country-specific and regional multimedia websites in 32 languages, analogue and digital radio broadcasting in Russian, English, French and other languages in more than 90 cities and online. Sputnik newsfeeds deliver 24/7 content to leading international media around the world in English, Arabic, Spanish, Chinese and Farsi. Sputnik websites get more than 60 million visitors. Twenty-two bureaus around the world, from Tokyo to Montevideo, employ more than 1,000 people from dozens of countries. Sputnik is part of the Rossiya Segodnya media group with its headquarters in Moscow.
...
Reddit
Google+
Blogger
Pinterest
StumbleUpon
Telegram
WhatsApp
170