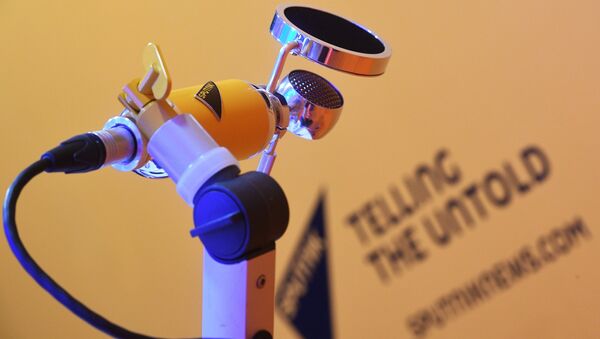 SHARJAH (The United Arab Emirates), (Sputnik) - Sputnik News Agency and Radio and the United Arab Emirates' (UAE) WAM news agency have signed a memorandum of understanding that provides for the exchange of information about events in the region and the world, Sputnik's press service said on Thursday.

The signing ceremony took place at the International Government Communication Forum in the UAE city of Sharjah. The agreement was signed by Sputnik's head of international projects, Vasily Pushkov, and WAM Executive Director Mohammed Alrayssi.

"A memorandum of understanding with such an influential agency as WAM is certainly an important step toward developing a partnership with our colleagues from the Middle East. I am sure that the document that we have signed will help the two media outlets provide the reader with the maximum [amount of] diverse information and different points of view on ongoing events, which will help boost Russian-UAE media cooperation," Pushkov said.

Alrayssi noted that Russia and the UAE enjoyed friendly relations and were strategic partners. He also said that the leaders of both countries sought to strengthen ties in different spheres, emphasizing that media was a very important area where the two countries cooperated.

"Having signed this agreement, we will be able to exchange news and learn from each other. Our relations with Sputnik are extremely important. We will share the news with the agency and also enable it to contact UAE-based organizations directly. We will not let anyone provide you and us with improper news… since we believe that professionalism and truth are extremely important," Alrayssi stressed.

Sputnik is a news agency and radio network with multimedia news hubs in dozens of countries around the world. Sputnik broadcasts through its websites in over 30 languages, as well as analogue and digital radio, mobile apps, and social media. Sputnik newswires, available by subscription, run around the clock in English, Arabic, Spanish and Chinese.

Abu Dhabi-headquartered WAM is the official news agency of the United Arab Emirates and part of the National Media Council. WAM broadcasts through its websites in 13 languages, and it also has offices in Cairo, Beirut, Brussels, Islamabad, Sanaa and Washington.