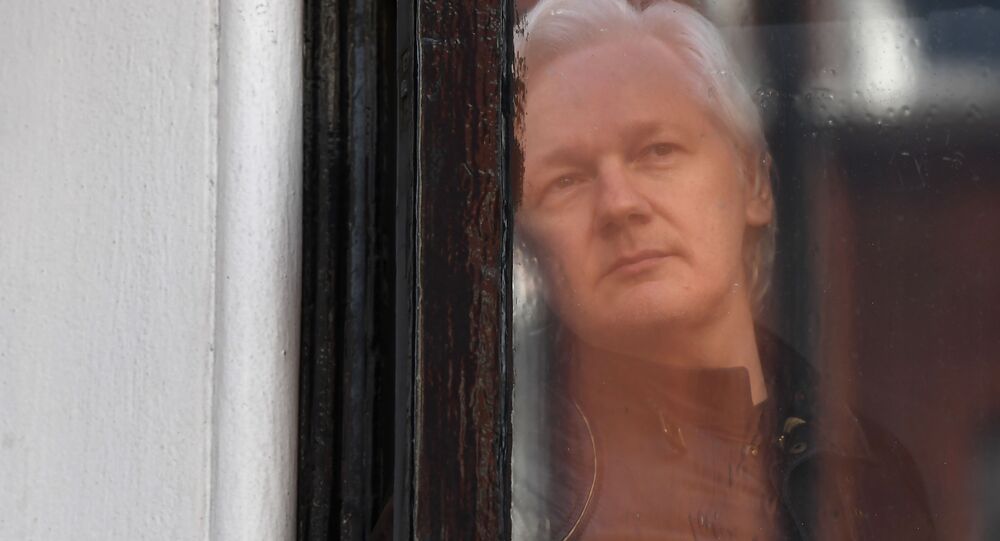 Assange Put 'Through Hell' as Quito Tried to 'Break Him Down', Ex-Diplomat Says

Ecuador’s Ambassador to the UK Jaime Marchan previously claimed that Julian Assange, who had been holed up in the country’s London embassy for seven years until his 11 April arrest, put excrement on the walls as part of his “daily protests”. His lawyer blasted the allegations, saying they were made as a pretext to force him out of the premises.

In an interview with Sky News, the former Consul of the Ecuadorian Embassy in London, Fidel Narvaez, has accused staffers of putting Julian Assange through “hell” in a bid to boot out the whistleblower by “breaking him down”.

“The last year was hell for Julian in that embassy. I was there the first months of the last year and I witnessed when Julian was told that he would no longer be allowed to have internet or access to the phone and wouldn’t be able to have visitors. The strategy was very clear – break him down. The government didn’t know how to end the asylum and face the catastrophic historical shame for doing that”.

The former senior diplomat, who worked at the London embassy for six of the seven years that Assange resided there, in fact, denied the claims by the Ecuadorian government that the journalist didn’t clean up after himself, his cat, and smeared excrement on the walls.

“Julian had a respectful relationship with staff, diplomats, and administrative staff. I don’t recall a single incident when he disrespected someone until I left in July 2018. He was 100% respectful. Clean and tidy? What is clean and tidy? Did he put the dishes in the dishwasher? Probably not at weekends. Is that a crime?” Narvaez continued.

He has as well explained Assange’s decision not to go to Sweden back in 2012, where he was being probed in a sexual assault case, saying that the WikiLeaks founder was concerned over a possible extradition to the United States for leaking confidential government data.

The diplomat's interview comes nearly two weeks after Ecuador’s Ambassador to the UK Jaime Marchan claimed that Assange’s relationship with the embassy staff deteriorated towards the end of his asylum to an extent that he smeared faeces on the walls.

“When Assange wanted to be unpleasant, he put excrement on the walls and underwear with excrement in the lavatory. We had to remind him to flush the toilet and clean the dishes. He had to be reminded of normal standards of behaviour all the time”, Marchan told the Daily Mail.

He went on to say that the personnel was ostensibly so irritated with him, they kicked out his cat for failing to clean up its mess, and they were suspicious that it “may carry a device to spy on us”.

Assange had been living in the Ecuadorian Embassy in London for seven years until 11 April when he was arrested by UK police after Quito withdrew his asylum status for alleged “repeated violations to international conventions and daily-life protocols”.

Hours after being dragged out of the embassy, the whistleblower was taken to a London court, where he was convicted of skipping bail in the UK after a 2012 extradition order to Sweden, where he was being investigated over sexual assault charges.

The UK judge added that the US must present all the necessary documents regarding an extradition request for Assange by 12 June.

© Photo : Twitter/TheGreatCalsby
Statue of Joan of Arc Disguised as Assange Amid Yellow Vests Rallies in Toulouse (PHOTO, VIDEO)
The US Department of Justice likewise announced charges against the Australian-born publisher and journalist, having accused him of conspiring with Chelsea Manning, a former US Army intelligence analyst, to break into US government computers and steal classified data in 2010.

Assange, who rose to worldwide prominence after his website WikiLeaks published Iraq and Afghanistan war logs, US State Department cables and Guantanamo Bay secrets, received asylum in the Ecuadorian Embassy in 2012 to avoid extradition to Sweden.

He has repeatedly denied sexual assault allegations in Sweden, insisting that they were politically motivated and designed to have him extradited to the United States since the charges followed the leak of classified documents.

WikiLeaks Announces 'Defend Assange From US Extradition' Meeting in London