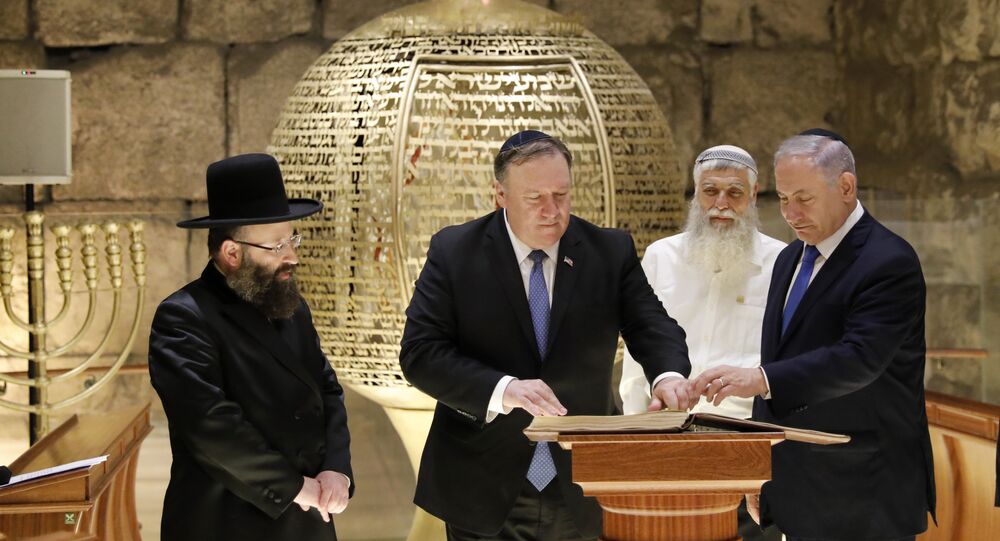 The video also shows US Secretary of State Mike Pompeo singling out President Trump’s decision to recognise Israel’s sovereignty over the Golan Heights; the occupied Syrian land was described by Pompeo as “hard-fought real estate”.

US Secretary of State Mike Pompeo has published a video of his visit to Israel on his Twitter page, which omits Muslim shrines in Jerusalem but includes a model of the Third Temple there.

The footage shows Pompeo visiting the Church of the Holy Sepulchre and the Western Wall in Jerusalem, which is followed by a model of the Third Temple.

Great visit to #Israel to meet with good friends @netanyahu & @PresidentRuvi. Built upon our strong partnership for peace, security, and prosperity in the region. My deepest thanks to @USAmbIsrael for hosting me! pic.twitter.com/smskztLE8I

Some Jewish groups want to erect the structure on the Temple Mount and have triggered concerns that Muslim sites such as the Dome of the Rock and Al-Aqsa mosque would be affected. The Temple Mount is one of the holiest sites in the world for Muslims, Christians and Jews.

Most Jewish-Orthodox scholars believe that the Third Temple will be rebuilt by the Jewish Messiah; an event that some believe may herald the end of the world. An apocalyptic mood was reflected in Twitter users’ reactions to Pompeo’s Jerusalem tour.

White evangelicals like Pompeo believe all Jews must return to biblical Israel where they will accept Jesus or be killed at the end of days
That’s why moving embassy to Jerusalem
Also temple must be rebuilt & animal sacrifice of a red heifer must be accomplished
So, yeah nuts.

So Pompeo is sayin that Trump saves the Jews and Jesus saves the Christians? Is Trump Tower or Mar a Lardo going to be the temple for this new religion?

For anyone not familiar with evangelical End Times theory:

Christians like Pompeo think Jews must rebuild Solomon's temple before Jesus can return and get the apocalypse rolling.

Every pretense by the right of "caring" about Jews stems from that belief. https://t.co/PtI2mKKXWj

@realDonaldTrump Are you a Bible believer? Why did Pompeo go to that secret underground fake 3rd Temple Sanhedrin? They have totally lost their minds. The Almighty warned us not to go to secret places, or under the ground, or go to the desert per se. STAY AWAY FROM THEM PLEASE

In Pompeo’s video, the Third Temple model is accompanied by his  mentioning US President Donald Trump’s recent decision to recognise Israel’s sovereignty over the Golan Heights; the occupied land was described by Pompeo as “hard-fought real estate” and an “important place”.

In a separate development, he told the Christian Broadcasting Network (CBN) on Thursday that as a Christian, he “certainly believes it’s possible" that “President Trump right now has been sort of raised for such a time as this, just like Queen Esther, to help save the Jewish people from the Iranian menace".

© AP Photo / Emrah Gurel
Trump’s Golan Heights Remarks Bring the Middle East on ‘the Brink of New Crisis’ – Erdogan
On Thursday, Trump tweeted that “after 52 years it is time for the United States to fully recognise Israel's sovereignty over the Golan Heights, which is of critical strategic and security importance to the State of Israel and regional stability.”

The Golan Heights were occupied by Israel during the 1967 Six-Day War, with Israeli Prime Minister Benjamin Netanyahu repeatedly underlining that the Jewish state would not meet Syria's demands that it retreat to the 1967 lines because they were “indefensible”.