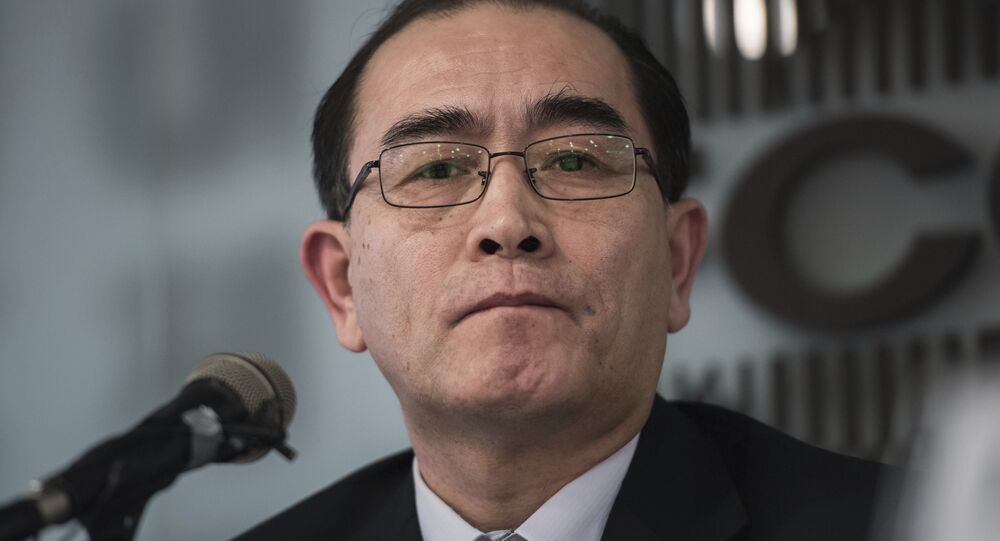 The two-day summit between the leaders of the US and North Korea in Vietnam’s Hanoi ended abruptly on 28 February without them reaching an agreement.

Thae Yong-ho, the former North Korean diplomat who defected to London in 2016, said US President Donald Trump was "absolutely right" to insist on his terms during the Hanoi summit with North Korean leader Kim Jong Un.

According to a Fox News report, the talks ended when the sides reached an impasse after Kim demanded "billions of dollars" in sanctions relief in return for closing a nuclear facility.

© AP Photo / Jon Chol Jin
'Of Course I Hold North Korea Responsible': Trump Changes Tune on Otto Warmbier's Death
Thae said that the UN-backed sanctions against North Korea are the only thing that holds Kim back from nuclear weapon and missile testing.

He pointed out that Trump caught the North Korean leader "by surprise" when he accused Kim of having other, previously secret nuclear facilities that the US wants dismantled.

"President Trump actually touched a kind of ‘fireball,'" Thae said, adding that the existence of the facilities "is a very sensitive issue between America and North Korea."

Commenting on the previous summit between the two leaders, which took place last June in Singapore, Thae called it "a great failure," but said he regained "a little bit of belief that maybe President Trump could make the very right decisions and directions" after Hanoi.

© REUTERS / Leah Millis
Trump-Kim Summit a Setback For Leaders, But ‘Big Loss For The People of Korea'
The fugitive diplomat accused Kim of being interested only in self-preservation, adding that the North Korean leader may "purge" his administration to ensure he stays in power. And because of that, Thae said, North Korea will not let go of its nukes.

"Nuclear weapons are the last resort which Kim Jong Un can rely on to continue his control of North Korea," Thae said.

Despite all of the above, the diplomat expressed his certainty that the current system in North Korea will not last. However, with Kim in power, the changes could take as long as 20 years, Thae said.