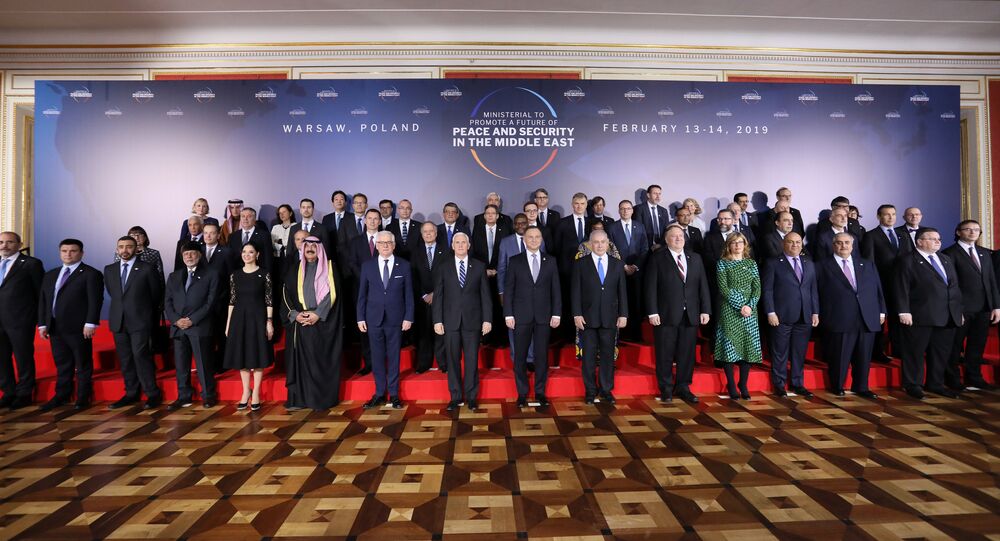 MOSCOW (Sputnik) - The United States, by organizing a conference on the Middle East in Warsaw, sought to establish an Israeli-Arab alliance against Iran rather than to find a long-lasting solution to the region's problems, in particular, the Israeli-Palestinian conflict, Nabil Shaath, an adviser to Palestinian President Mahmoud Abbas, said.

The "Ministerial to Promote a Future of Peace and Security in the Middle East" conference was held in the Polish capital on February 13-14. The event was devoted, among other issues, to the Israeli-Palestinian conflict. Iran's alleged destabilizing influence in the region was highlighted during the two-day conference.

The official noted that the only possible solution to the Israeli-Palestinian conflict today was a two-state solution, admitting, however, that this would be hard to implement under the current Israeli and US administrations.

Palestine acted sensibly when it rejected US President Donald Trump's "deal of the century" that aimed to solve the long-standing conflict between Palestine and Israel, Nabil Shaath said.

"We have taken, I think, the courageous step of saying 'no' to Mr. Trump, of rejecting the 'deal of the century.' I think it is not only courageous, I think it is wise," Shaath said at the plenary session of the Valdai Discussion Club's Middle East conference.

The official explained that Palestine did not have to see what the United States would say about the deal since the country had already begun to implement its strategy on the ground by supporting Israeli settlements and cutting down the number of people recognized as Palestinian refugees.

© AFP 2020 / Janek SKARZYNSKI
Czech PM Says V4 Talks in Israel Cancelled After Poland Refuses to Participate
Participants of the summit in Warsaw, which lacked the participation of key regional players like Iran, Iraq, Lebanon, Turkey and Syria, agreed that Iran allegedly posed the greatest threat to peace and security in the region. Iranian Foreign Minister Mohammad Javad Zarif criticized the event before it starts, calling it an "anti-Iran conference," and slammed Poland for hosting it.

The Russian Foreign Ministry refrained from participating in the Warsaw conference, calling the meeting a US "political project" aimed at promoting Washington's geopolitical interests within the international community.