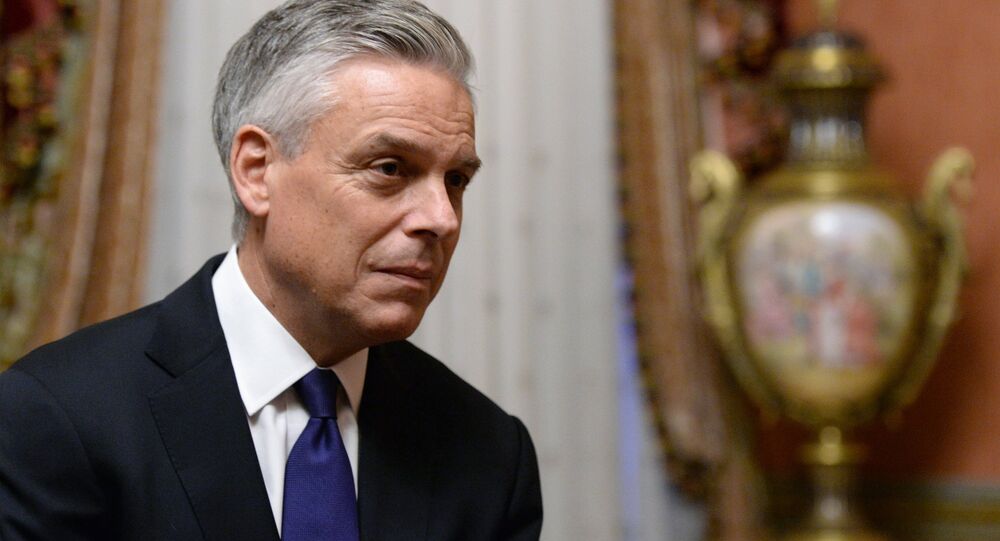 Moscow suspended its obligations under the Intermediate-Range Nuclear Forces Treaty on Saturday, mirroring the US move to scrap the treaty, which bans land-based ballistic and cruise missiles in the 500-5,500 km range, a day earlier.

Washington reserves the right to freeze its withdrawal notice from the INF Treaty if Russia returns to verifiable compliance with the arms limitations pact within six months, US Ambassador to Russia Jon Huntsman has said.

In an op-ed in RBC, a Russian business news site, the ambassador wrote that the US withdrawal from the treaty was the "result of actions committed by Russia," including Moscow's efforts to "produce, adopt and conduct flight test of a class of missiles" banned under the provisions of the INF. He added, however, that the US would be willing to "withdraw its notice of withdrawal before the expiration of the six-month period" if Moscow returned "to full and verifiable compliance with the agreement."

The six-month window was one "final opportunity" for Russia to save the INF, Huntsman said.

© Sputnik
Centre of Washington's INF Pullout Ploy: Russian 9M729 Missile in Facts and Details
Earlier, in its announcement on its plans to scrap the INF, Washington accused Russia of violating the 1987 treaty with the development of its 9M729 ground-based missile systems (known as the SSC-8 under US classification), which the US said had a range of over 1,000 km. Moscow denied the claims, and said that the range of these weapons was 480 km, which is in full compliance of the INF. The US has yet to provide any evidence publicly to back up its charges on Russia's violation of the treaty.

In his op-ed, Huntsman called the 9M729's existence a "gross violation of the INF Treaty which the Russian leadership intended to keep secret," and said the US had warned Russia on this issue since 2013. According to the ambassador, only the "destruction of all 9M279 missiles, launchers, and auxiliary equipment" would "ensure Russia's return to compliance with the treaty."

On Monday, Russian Foreign Minister Sergei Lavrov stressed that all of Russia's proposals related to arms control remained on the table, but that Moscow would not "remind our Western partners about them."

"When [US officials] come to understanding their responsibility for the problems that are created by US policy…the doors are open, we will talk. On an equal footing, on the basis of taking each other's interests, legitimate ones, not fictional ones, into account," Lavrov said.

© Photo : Russian Ministry of Defence
WATCH Footage of US Factory Capable of Producing INF-Violating Missiles
According to the Russian foreign minister, the US side was the one violating the INF by deploying its missile defence shield components in Poland and Romania, with these systems said to be capable of fielding offensive ground-launched cruise missiles. Earlier, the Russian Ministry of Defence released satellite images of a Raytheon Corporation plant in Arizona which it said was capable of producing missiles which violate the INF.

The INF Treaty was signed in 1987, at the end of the Cold War, obligating the United States and the Soviet Union (and later Russia) not to develop, produce or field intermediate-range nuclear-capable land-based ballistic and cruise missiles. The treaty was aimed primarily at reducing the threat of a nuclear war in Europe.