The Syrian government has yet to comment on the US accusations. In November, the Russian Defence Ministry confirmed the use of chlorine-filled shells by terrorists in the Syrian city of Aleppo.

The US State Department has accused pro-Damascus forces of "likely" using tear gas against civilians in Aleppo on 24 November, adding that Washington "has information" indicating that Russian and Syrian personnel were allegedly involved in the incident.

According to the DoS spokesperson, Washington "strongly refutes this narrative."

In addition to this, the official cautioned Russia against tampering with the site of the suspected chemical attack in Aleppo.

The Syrian and Russian military officials have yet to comment on the latest US accusations, however, earlier, the Russian Defence Ministry reported that terrorists used chemical weapons in an attack in Aleppo. The Russian military did not rule out that the White Helmets non-governmental organisation could be behind the attack, in which more than 70 civilians were injured. 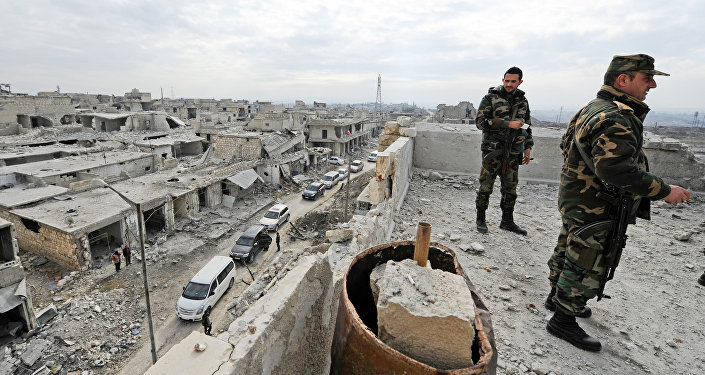 © REUTERS / Omar Sanadiki
Chemical Attack in Aleppo: What May Happen Next?
The area is located near the village of Al-Buraykat, controlled by the militants of Hayat Tahrir Al-Sham, formerly the Nusra Front*.

Commenting on the chemical attack, Russian President Vladimir Putin stated that it was a "blatant violation of the ceasefire," adding that the use of poisonous substances shouldn't go unpunished.

In response to the use of chemical weapons, Russian jets hit the targets of terorrists who were believed to be behind the shelling of Aleppo with deadly chlorine gas.