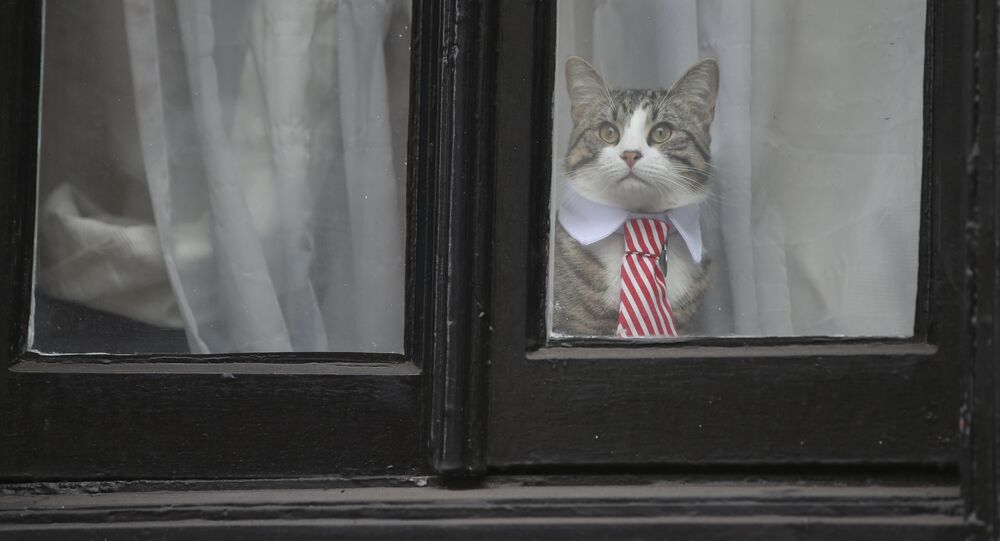 WikiLeaks founder Julian Assange has been living in the Ecuadorian Embassy in London for over 6 years, two of which he spent with a gorgeous ‘whisker-blower’.

Julian Assange gave away his beloved cat so that it would no longer be trapped with him in the Ecuadorian Embassy in London, Italian newspaper La Repubblica reported on Tuesday.

Assange’s legal team member Hanna Jonasson tweeted that the Ecuadorian government threatened to put the cat in a pound, therefore the WikiLeaks founder asked his lawyers to take the kitty to a safer place – to his family.

In the same document in which Ecuador threatened to hand Assange over for arrest, Ecuador also threatened to put Assange's cat in the pound.
Insensed at the threat, he asked his lawyers to take his cat to safety. The cat is with Assange's family. They will be reunited in freedom. pic.twitter.com/W9FvDbvQgw

‘With its funny striped tie and ambushes on the ornaments of the Christmas tree at the embassy’s entrance, the cat had helped defuse tensions inside the building for years. But Assange has preferred to spare the cat an isolation which has become unbearable and allow it a healthier life’, La Repubblica wrote.

Assange’s cat knows too much. We need to make sure he’s protected. https://t.co/oY53I1Iefk

Last month, media speculated that Ecuador had introduced a new set of restrictions on Assange, warning him against online comments on political issues and ordering to clean his bathroom and take care of his cat, or risk losing it.

© REUTERS / Neil Hall
‘A Lot at Stake': First Court Effort to Force Release of Alleged Assange Indictment Begins
La Repubblica’s journalists, who managed to gain access to the embassy and visit Assange despite the fact that Ecuador had cut him off all contacts in March, wrote that the whistle-blower was spending all of his time preparing for his criminal defence against secret charges allegedly filed in the US.

It’s been six long years that Julian Assange has been holed up at the Ecuadorian Embassy in London, initially to avoid prosecution by Swedish authorities in a sex assault case.

The case against him was dropped, but he still risks arrest by UK police for breaching previous bail condition and the possibility of extradition to the United States, where he might be charged for leaking damning documents on US military operations.

Most recently, a US judge postponed ruling on a legal request to unseal alleged criminal charges against Assange, while the federal government refused to either confirm or deny their existence.