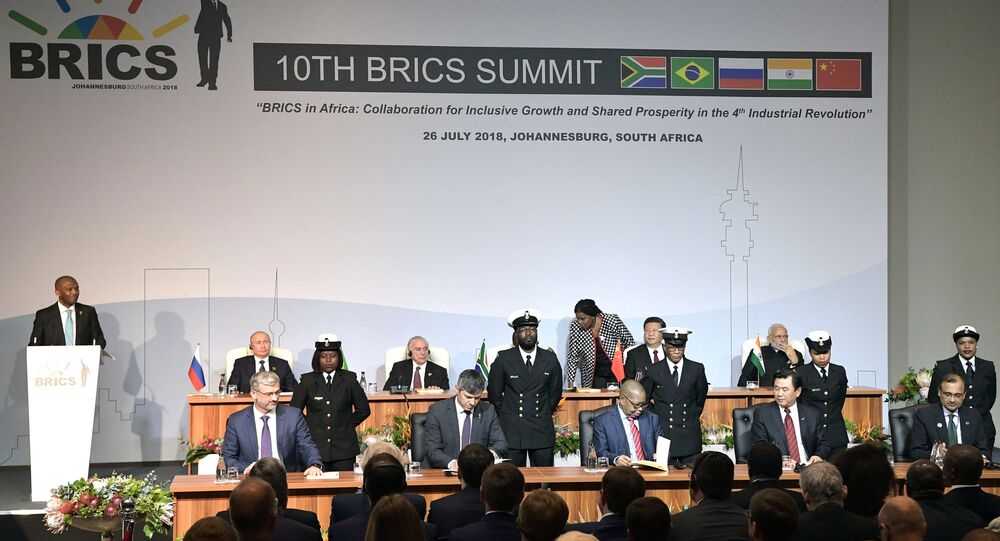 While the heads of the BRICS countries were holding talks and working on the Johannesburg declaration, business leaders from Brazil, Russia, India, China, and South Africa were also in town – to share views on the 4th industrial revolution, and on ways of dealing with America’s trade war.

If you walk around Nelson Mandela Square in Johannesburg’s Sandton area, you can find the man’s name and images everywhere – from the giant statue in front of a large shopping complex, to smaller Mandela figurines in shops, to another big statue made of real chocolate.

Mandela, whom many locals call by his Xhosa tribal name – Madiba – was an iconic figure for South Africans – someone whom they still admire as a great leader, who struggled for racial equality.

Nelson Mandela passed away in 2013, but his image is on the logo of this year’s BRICS summit, and his name was mentioned many times during the event:

“We invoke his name here because the work we are here to do requires of us to build on the foundations Madiba laid for the advancement of democracy, world peace, human solidarity, international cooperation and mutual respect,” said South Africa’s current president, Cyril Ramaphosa. It’s the first BRICS summit for Ramaphosa, who was elected in February this year, replacing Jacob Zuma in office.

As the heads of the BRICS states gathered in Johannesburg to hold bilateral and multilateral negotiations, business leaders were discussing investments, common projects and the economic pressure from Washington.

China and Russia are currently affected by America’s hostile economic policies, ranging from sanctions, as is the case in Russia, to possible new tariffs – which is the case with Beijing; so entrepreneurs and officials from both countries often see BRICS as a good alternative to partnerships with the US, and a promising new market.

Usually it’s hard for journalists to arrange interviews with leaders at big events, but in Johannesburg it’s not a problem – most VIPs, like Russia’s Skolkovo Foundation chariman Arkady Dvorkovich, can be spotted when they go to take photos with Mandela statue pic.twitter.com/a2Wj7Co6cX

​Russia’s former Deputy Prime Minister Arkady Dvorkovich, who is now the chairman of the Skolkovo Foundation, told Sputnik what Russia has to offer to BRICS partners when it comes to the high-tech sector:

“Innovation, using new technologies, big data, new materials and neurotechnology – all of that is becoming reality, and it’s important to make these things as widely available as possible.”

In 2014, the bloc established its own financial institution – the New Development Bank, which has issued loans totaling $5.1 billion since its creation, and this year the figure of approved loans is nearing $1.7 billion.

South Africa, which is currently working hard to attract foreign investment, just received help from its BRICS allies. Several days ago the New Development Bank gave the country a $300 million loan for the upgrade of its outdated coal-powered energy sector.

The summit did not paralyze the city in any way. Some traffic restrictions around BRICS venue, but other than that – Johannesburg doesn’t seem to stop growing. This busy construction site of an office/apt complex is literally 300m away from the venue. pic.twitter.com/jQ4Els4Xfo

The summit resulted in the signing of the Johannesburg declaration, in which the BRICS leaders commended South Africa for its drive towards the bloc’s development, its inclusiveness and the commitment to technology-driven growth. The document also mentions other aspects of economic cooperation, like the development of sustainable energy sources, as well as political issues, like multilateralism and the need to reform international institutions.

READ MORE: Top 5 Things You Need to Know About BRICS Ahead of the 10th Summit

Even though the term BRIC was coined at the turn of the 21st century, the bloc’s first summit wasn’t held until 2009, when its leaders gathered in Russia’s Yekaterinburg. One year later South Africa joined the bloc, which originally consisted of Brazil, Russia, India and China.