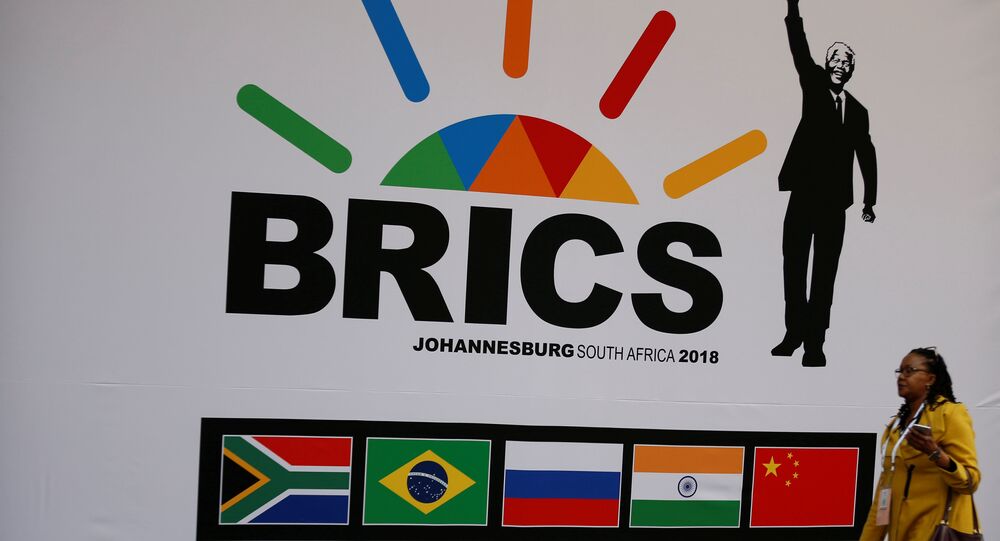 As Johannesburg is gearing up to host the anniversary summit of the BRICS heads of state, accompanied by some other leaders, Sputnik takes a closer look at the organization.

The term 'BRIC' was coined by a Goldman Sachs economist in 2001 to describe four emerging powers, Brazil, Russia, India and China, which were expected to rival the G7 countries in terms of GDP. The countries were quick to capitalize on the format when their leaders met in 2008 on the sidelines of the G8 meeting in St. Petersburg. They invited South Africa to join the club in 2010. Today, the five countries account for over 40% of the planet's population and more than 20% of its GDP.

BRICS will hold its 10th summit in Johannesburg, South Africa from 25 to 27 July. The meeting will wrap up with a "Johannesburg Declaration", which is expected to include joint commitments by the member states for the following year.

BRICS doesn't have a secretariat, charter, or other official norms like other similar organizations such as the Shanghai Security Organization or MERCOSUR.

According to Russian Foreign Minister Sergey Lavrov, BRICS doesn't have what he called the "bloc discipline" which is inherent to military alliances. The group members share common or similar views on key economic, political, and humanitarian issues.

This year, South Africa took over the rotational chair after China's turn, focusing on "inclusive growth and shared prosperity in the fourth industrial revolution," which means introducing advanced technology into each economic sector.

Different Goals Under One Roof

The organization touts itself as apolitical and helps its members maintain relations and improve their image; however, they don't view it as a key instrument of foreign politics. For Russia, BRICS is but another platform to discuss global security issues, while China regards it as a tool to promote its business interests in Africa. BRICS helps Brazil and South Africa with investments, while consolidating India's foreign relations.

Russia's Security Council Secretary Nikolai Patrushev praised BRICS as a "crucial stabilizing factor in global affairs", calling for a "united front in the fight against the drive by certain states to preserve hegemony in global affairs at the expense of other countries."

Standing Up to the US Dollar

Since 2015, the group has sought to use national currencies to promote mutual trade. In 2015, the BRICS leaders reached a deal to set up a $100 billion forex pool. Although Russia isn't likely to require protection from currency volatility shocks, it is interested in the BRICS New Development Bank (NDB) and the Asian Infrastructure Investment Bank; they're expected to play the role of the World Bank and the EBRD, which have refused to invest in projects in Russia.

The five BRICS members sealed the deal to set up the NDB in Fortaleza, Brazil in 2014. They decided that they all would have equal voting shares, unlike in other international banks where a country's voting weight depends on its contributions. In 2016, the NDB provided over $1.5 billion in financial assistance, including for projects to build power plants in each of the five member states. A year later, it pledged to ramp up lending to $2.5 billion.

Expectations From the Summit

The 10th summit will largely be dedicated to peace, human rights, medicine, and tourism. South Africa has proposed setting up a working group on peacekeeping, a BRICS gender and women's forum, and a vaccine research center.

According to Indian Foreign Minister Sushma Swaraj, her country will push the club for a counter-terrorism strategy with a focus on "money laundering, terrorist-finance, cyber-space, and de-radicalization."

In turn, China has a keen interest in investments: on Tuesday, it pledged to invest $14.7 billion in South Africa. "I expect to see a bold, sweeping statement led by the Chinese side that will condemn protectionism and de-globalization with an intent to keep the global trading regime intact and predictable," Martyn Davies, managing director for emerging markets and Africa at Deloitte, said, as quoted by Bloomberg.

Dropping in on the BRICS Summit

Wednesday's summit will see some other guests apart from the Brics heads of state, including the UN secretary general, and the leaders of Argentina, Indonesia, Egypt, Jamaica, and Turkey. South Africa has also invited representatives of Angola, Gabon, and Zambia to attend.

Last year, China was a proponent of a BRICS-plus circle, which envisages dialogue between the five regional leaders and those within the zones of their influence or interest.