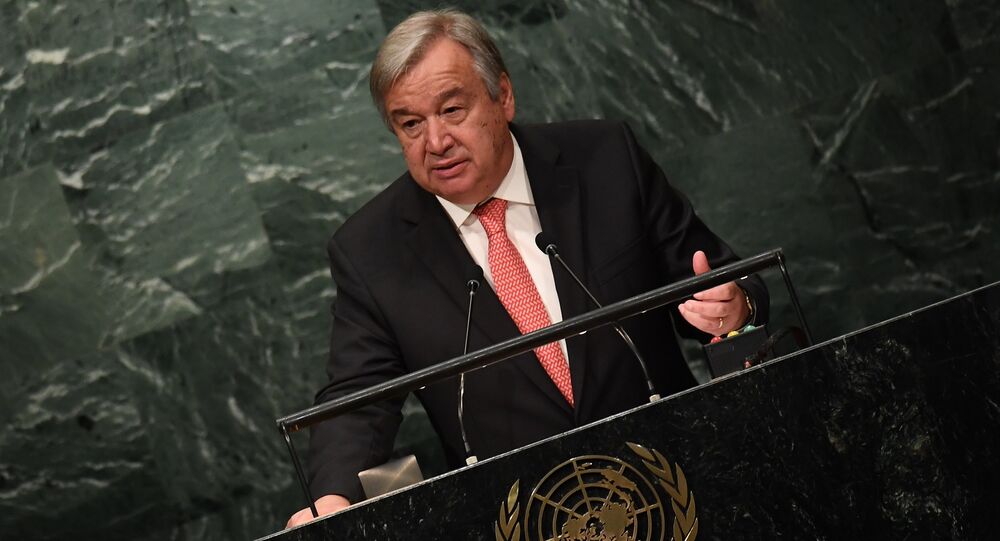 UN Secretary-General Antonio Guterres addressed the UN Security Council on Friday, speaking about the recent escalation of the situation in Syria, triggered by an alleged chemical weapons attack in Douma, blamed on Damascus. OPCW experts are currently heading to the country for an independent probe.

The UN secretary-general started his speech with the issue of an alleged chemical weapons attack in the Syrian city of Douma. He stated that the Middle East was currently "in chaos" and has become a threat to global peace.

"The Cold War is back - with a vengeance but with a difference," Guterres said, noting that the safeguards which managed the risk of escalation during the first Cold War "no longer seem to be present."

"Increasing tensions and the inability to reach a compromise in the establishment of an accountability mechanism threaten to lead to a full-blown military escalation," Guterres stated at a meeting of the UN Security Council, referring to the recent claims of the US and its allies, saying that Damascus was behind the alleged chemical attack.

Following the accusations, the US announced that it was considering airstrikes in Syria. Some of the country's allies, namely the UK and France, supported the idea, saying they would consider joining the possible strikes.

The UN top official reiterated strong condemnation of the use of chemical weapons by any party to the conflict:

"I reaffirm my full support for the Organization for the Prohibition of Chemical Weapons, the OPCW and its fact-finding mission in undertaking the required investigation into these allegations."

In his address to the Security Council, he called for the creation of an independent mechanism to investigate the possible use of chemical weapons.

"I appeal to the Security Council to fulfill its duties and not give up on efforts to agree upon a dedicated, impartial, objective, and independent mechanism for attributing responsibility with regard to the use of chemical weapons," Guterres said.

The UN official underlined that there was no military solution to the conflict.

"I reiterate there is no military solution to the conflict. The solution must be political, through the Geneva Intra-Syrian talks as stipulated in Resolution 2254 of the Security Council and in line with the consistent efforts of my special envoy Steffan de Mistura," Guterres stated.

According to Guterres, the first groups of experts from the Organization for Prohibition of Chemical Weapons (OPCW) has arrived in Syria.

"The first team of the OPCW is already in Syria. A second is expected today or tomorrow," Guterres said in prepared remarks to the UN Security Council.

The US plans concerning the Syrian issue remain uncertain. In the latest statement from US ambassador to the UN Nikki Haley, she specified that US President Trump hadn't decided on what actions to take in Syria, despite his recent twitter messages.

READ MORE: Threats to Use Force Against Syria Is Violation of UN Charter - Moscow

On April 11, Trump tweeted a remark calling for Russia to "get ready" for "nice and new and smart" American missiles in Syria, as a response to an alleged chemical attack by the Syrian government. However, a day after he backed off, saying that he had never said when an attack on Syria would take place.

Reacting to these tweets, Moscow called for a serious approach to the issue and refused to respond to what it called "Twitter diplomacy."