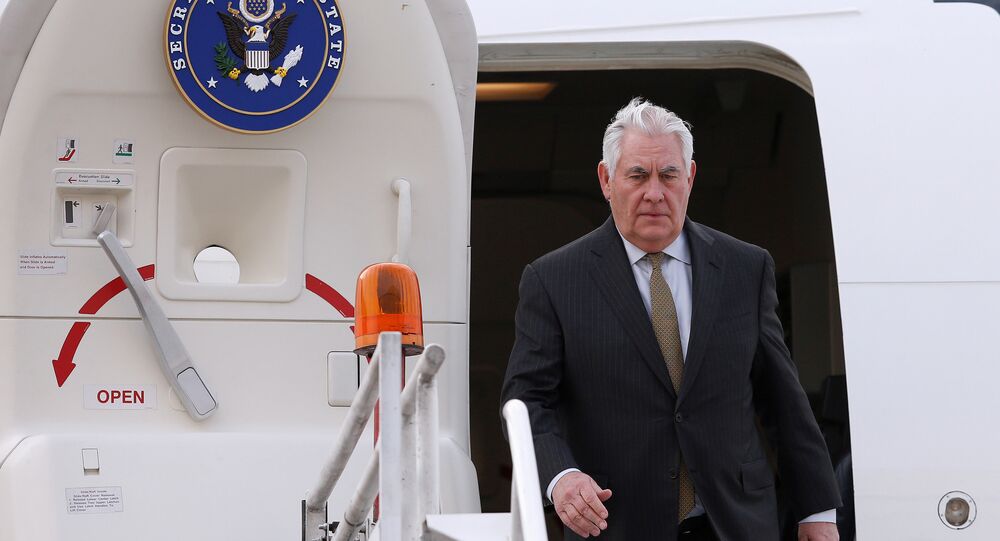 As the US Secretary of State embarks upon his voyage across the region that the United States has long considered its own backyard since the implementation of the Monroe Doctrine in 1823, it’s unclear exactly how receptive the countries he’s about to visit will be to his message.

Over the course of his week-long journey, US Secretary of State Rex Tillerson is expected to visit Mexico, Argentina, Peru, Colombia and Jamaica in an effort to improve relations between the United States and these Latin American nations.

© AFP 2021 / Pedro Pardo
Tillerson’s Trip to Latin America Just an Attempt to Topple Venezuela’s Maduro - Diplomat
The US top diplomat plans on addressing a range of bilateral issues, such as economic growth, energy development, security, and the war on drugs, with each of his counterparts, and is also expected to advocate for increased regional attention to the crisis in Venezuela, a senior State Department official told reporters in a conference call on Monday.

"South America is blessed with abundant energy resources: Colombia, Peru, Brazil, Guyana, and Argentina, all have significant undeveloped oil and natural gas," Tillerson said during a speech at the University of Texas. "The United States is eager to help our partners develop their own resources safely and responsibly as energy demand continues to grow."

However, it appears that his trip may not be all smooth sailing as some of these countries aren’t exactly happy with the way things stand between them and Washington.

The election of Donald Trump as the 45th President of the United States put a strain on US-Mexican relations as one of his campaign pledges involved building a wall along the border between the two countries, and force Mexico to pay for its construction to boot.

Also, the Los Angeles Times reports that several Latin American countries, including Mexico, had earlier voiced their concerns about Trump’s intent to renegotiate the North American Free Trade Agreement (NAFTA), warning that they may reconsider their cooperation with the US on other matters if the deal breaks down.

Last year’s Pew Research Center poll also revealed that 65 percent of Mexicans express a negative opinion of the US as compared to 29 percent in 2015.

Argentinian President Mauricio Macri has enjoyed a close business relationship with Donald Trump that dates back to 1980s, and was one of the first to congratulate the American mogul when the latter was elected as president.

However, a week ago Macri held a meeting with Russian President Vladimir Putin where both leaders agreed to strengthen bilateral economic and political cooperation and to strengthen the “comprehensive strategic partnership” between the two nations.

At the same time, US Secretary of State Rex Tillerson has declared that the United States is alarmed with Russia’s activities in the region.

"Latin America does not need new imperial powers to seek only to benefit their own people," Tillerson said. "Russia’s growing presence in the region is alarming, as well as it continues to sell arms and military equipment to unfriendly regimes who do not share or respect democratic values."

READ MORE: Why US Claims on Russia's 'Predatory' Role in LatAm Have 'No Basis in Reality'

It remains to be seen how Tillerson’s visit may affect the agreements reached between Buenos Aires and Moscow or whether the meeting with the Russian leader might influence the relations between Argentina and the US.

According to Los Angeles Times, in Colombia Tillerson may have to address concerns from the local officials about the US “again defining relations through the prism of security and narcotics.”

With the Colombian civil war officially over, a number of US lawmakers have apparently claimed that former FARC guerrillas have now joined the ranks of the country’s sizeable army of drug manufacturers and traffickers.

And since the US maintains cordial relations with Peru and Jamaica so it appears unlikely that Tillerson may hit a snag during his visit there.