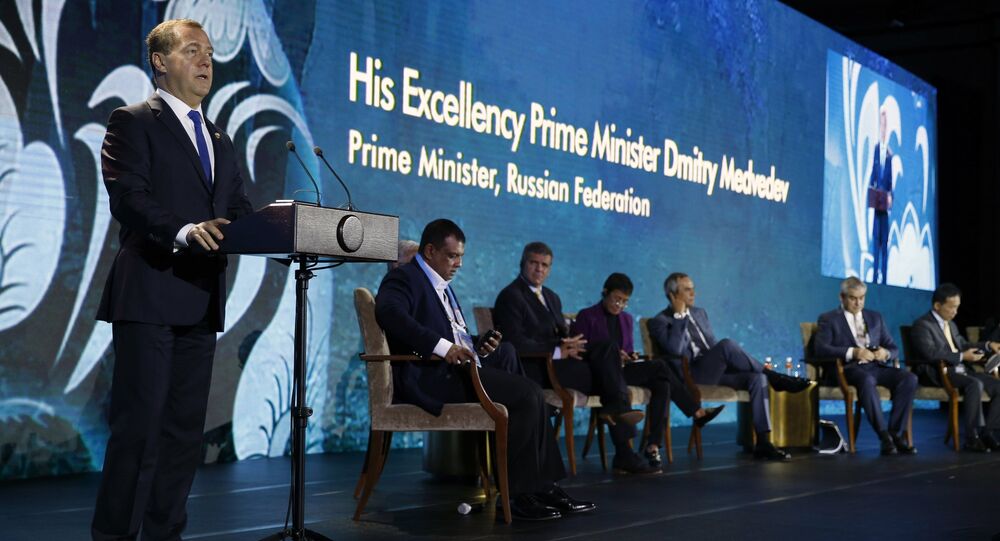 Prime Minister Dmitry Medvedev held a number of bilateral meetings and spoke at the plenary session of the ASEAN-2017 Business and Investment Summit in Manila.

MANILA (Sputnik) – Russian Prime Minister Dmitry Medvedev speaking at the ASEAN Business & Investment Summit 2017 in the Philippine capital of Manila said that “We together with partners in the Eurasian Economic Union are interested in the broadest cooperation with ASEAN members, based on universal principles and the norms of international trade."

READ MORE: ASEAN Summit: How China Diplomatically Outflanked the US in Manila

Speaking about the prospects for cooperation in the field of infrastructure prime minister said that: "Taking into account our big territory the development of infrastructure is of a paramount importance for us, and we are ready to allow access to our infrastructure capacities to all ASEAN members. Not only airports, but also sea terminals, railway network, roads, pipelines and high-speed communication lines [can be used by ASEAN nations]."

Medvedev also reminded that Russian Railways (RZD) is already participating in the implementation of a major project to create an integrated infrastructure on the island of Kalimantan (Indonesia), while the Singapore company Changi Airports is investing in the development of an air hub in Vladivostok.

Russian Prime Minister Dmitry Medvedev pointed out that the trade turnover between Russia and the Association of Southeast Asian Nations "could be many times higher, potentially dozens of times. That is why, it will be necessary to do everything possible to take these [Russian-ASEAN] relations to a new level."

"The trade turnover between Russia and the ASEAN economic association is not as big as we want. It amounts to about $15 billion per year," Medvedev added.

The Russian-ASEAN trade turnover reached $13.6 billion in 2016. According to Medvedev, the figure has increased by some 33 percent in 2017.

The 31st ASEAN summit and related meetings are being held on November 10-14 in the Philippines. Leaders from the 10 ASEAN member nations and dialogue partners, including Australia, Canada, China, the European Union, India, Japan, New Zealand, Russia, South Korea and the United States, are attending the event.

Russian PM Medvedev: No Excuse for Terrorist Attack in Spain