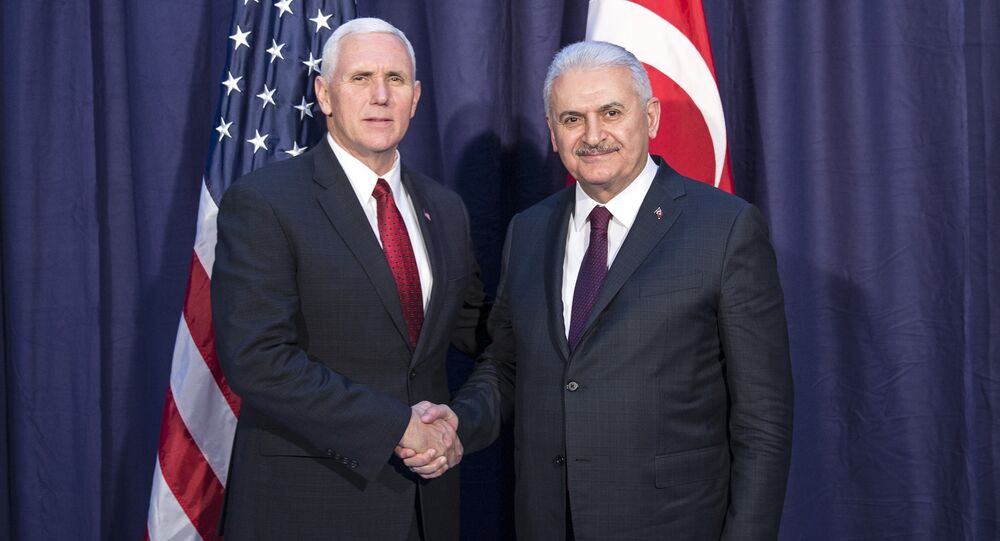 Ankara believes that the Syrian Kurds' YPG movement that is fighting Daesh in the country is linked to the PKK, banned in Turkey.

ANKARA (Sputnik) — Turkey expects that the United States will stop supplying Syria's Kurdish People's Protection Units (YPG) with weapons after the defeat of Daesh, according to Prime Minister Binali Yildirim.

"We also received a promise from Pence to keep better track of weapons provided to the YPG. … Pence said the US understands Turkey's sensitivity about the YPG; their partnership is temporary and will last only a little longer now that the Raqqa operation is complete," Yildirim said, as quoted by Daily Sabah newspaper.

Ankara considers the YPG to be affiliated with the Kurdistan Worker’s Party (PKK), which is listed as a terrorist group in Turkey, the United States and the European Union. Turkish Defense Minister Nurettin Canikli said that the US supplied weapons to the YPG.

Turkish President Recep Tayyip Erdogan had earlier yet again expressed his disapproval to US Secretary of Defense James Mattis over Washington’s support of the YPG.

READ MORE: Syrian Government Holds No Talks With Kurds on Separation of the North — Deputy

During the meeting, both officials stressed the importance of the territorial integrity of Iraq and Syria amid Northern Iraq’s Kurdish Regional Government’s (KRG) move toward independence.

On the Extradition of Fethullah Gulen

According to Yildirim, the issue of the extradition of Islamist cleric Fethullah Gulen, accused by Turkey of being behind the 2016 coup attempt, was also raised during the meeting.

"We have requested a concrete step in the extradition of Gulen. … We demanded that at least a step to restrict Gulen's movements and actions be taken as a start. … It makes us wonder if there is a reason that no steps are being taken in Gulen's extradition," the prime minister said.

According to Yildirim, it was a very productive meeting and the two sides are committed to normalizing the bilateral relations.

© AP Photo / Emrah Gurel
US Istanbul Consulate Employee Arrested on Suspicion of Links to Gulen Coup Plot
Erdogan demanded Gulen's extradition from the United States after the failed coup attempt of July 15, 2016, which had left over 240 people dead and an estimated 2,000 wounded. Since then, Ankara has sent several packages of documents to Washington to support the request. Citing US officials in August 2016, the media reported that Turkish evidence about Gulen was not related to the coup.

In September 2016, Gulen, who had denied his involvement in the failed government takeover, said that he would return to Turkey from the United States, where he had been living since 1999, to face trial if Washington approved his extradition, noting, however, that Ankara had not submitted any evidence of his alleged role in the failed coup.