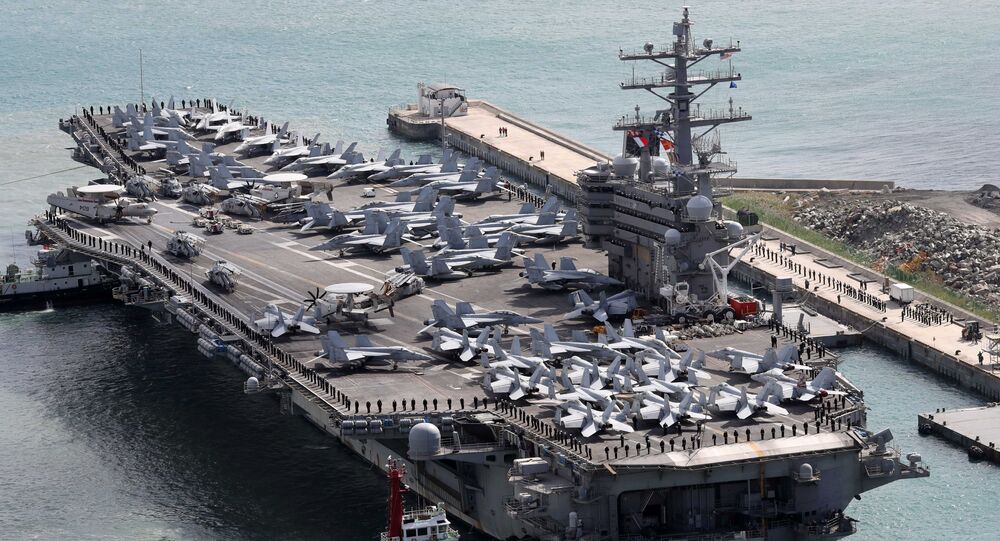 The USS Ronald Reagan nuclear-powered aircraft carrier entered the port of Busan in southern South Korea on Saturday October 21 after a weeklong military exercise, fueling the standoff between the US and North Korea even further.

The US unveiled large scale drills in the region jointly with South Korea in order "to enable the combined defense" against North Korea's threat, US military Marc Dalton was quoted by NTD.tv as saying.

The 100,000-ton USS Ronald Reagan warship was involved in massive drills that started on October 15 and ended this Friday, which also included fighter jets, helicopters, as well as naval ships and submarines.

The aircraft carrier sailed into the South Korean port after patrolling waters east of the Korean Peninsula earlier in the week.

© REUTERS / KCNA
North Korea 'Has the Missile Technology to Destroy US Supercarriers Near Its Shores'
The move came amid the worsening situation on the Korean Peninsula and ahead of US President Donald Trump's first official visit to Asia. While Washington has called it a regular visit to South Korea, Pyongyang labelled it as "a demonstration of the real strike" upon the North.

Commenting on the drills, the North Korean state run news agency KCNA warned on Thursday that Pyongyang could stage an unprecedented strike on the US at an unexpected time.

Furthermore, Kim Jong-un has vowed to take the "hardest ever countermeasures" against Washington, as Trump threatened to "totally destroy" his country.

The tensions between the two countries soared amid North Korea's growing nuclear and missile activities. Pyongyang fired two intercontinental ballistic missiles in July and conducted its sixth and most powerful nuclear test in September.