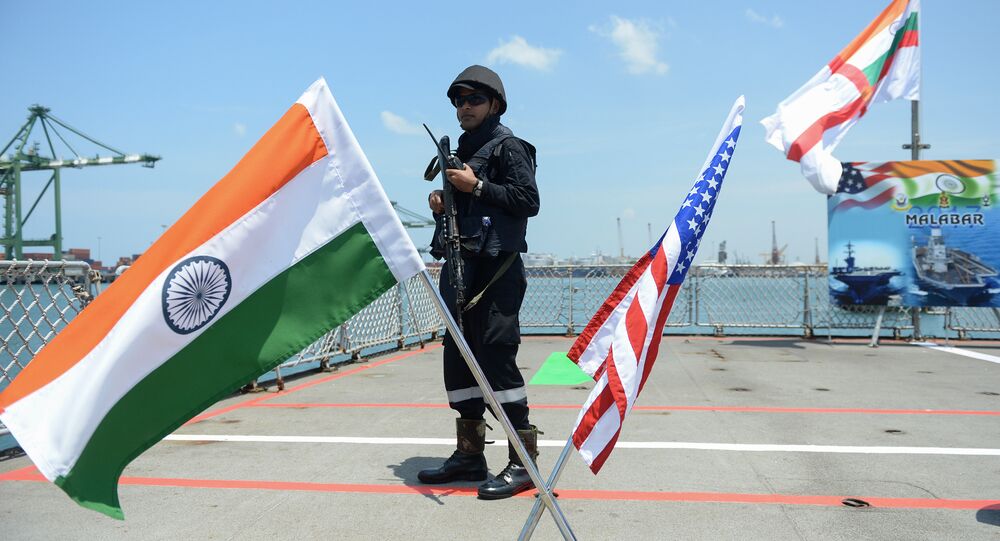 Japan has already publicly backed Indian stand on Doklam crisis while US has proposed new bilateral dialogue to elevate strategic consultations with India to enhance peace and stability across the Indo-Pacific region.

New Delhi (Sputnik) – New Delhi is reportedly holding back-channel consultations with the US and Japan to schedule a trilateral meeting on the sidelines of the United Nations General Assembly in New York next month. India expects that the trilateral meeting between Foreign Minister Sushma Swaraj, US Secretary of State Rex Tillerson and Japanese Foreign Minister Taro Kono, if held, will serve as a precursor to a formidable India-US-Japan axis that would help perforate China’s ambitions in the Indo-Pacific region.

© REUTERS / Adnan Abidi/File Photo
The Doklam Gambit: How China Lured India into a ‘Diplomatic Trap’
India’s ambition stems from its long-standing rivalry with China which has intensified in the recent months with both sides refusing to budge from their respective positions in Doklam. The Indian Army and the Chinese People's Liberation Army (PLA) are locked in a standoff at the Doklam Plateau in western Bhutan since the last two months. PLA soldiers had started building a road at Doklam — a tri-junction and a disputed area between Bhutan and China on June 16. Indian border forces swooped down on the area to thwart the Chinese attempt to build a road. India says it is not only preventing China’s unilateral attempt to disrupt the status-quo over a disputed territory but also protecting its own security interests — a claim strongly despised by China.

During its most recent media briefing, China’s Foreign Ministry described India’s objection to its road building activity in Doklam as ridiculous.

“Dong Lang (Doklam) is indisputably China's territory. The Indian side illegally crossed the boundary under the pretext of its so-called concern about China's construction of road. This excuse is ridiculous, the nature of this incident is serious and the fact is there for all to see. The only prerequisite and basis for resolving this incident is that the Indian side immediately and unconditionally withdraw all the trespassing personnel and equipment,” Foreign Ministry Spokesperson Hua Chunying said. This came in response to India’s Home Minister Rajnath Singh's statement that India had never been an aggressor and has had no ambition to expand its border.

Japan has been one among the few countries publicly siding with India and Bhutan on the issue. Tokyo's envoy to New Delhi, Kenji Hiramatsu, last week, asked China to stop trying to unilaterally change the status quo in Doklam Plateau. Beijing slammed Japan by saying that Tokyo did not have the facts of Doklam right. India is hoping that Japan will reassert its support during Prime Minister Shinzo Abe’s expected visit to New Delhi next month.

Japan’s support to India was not unforeseen as Tokyo is already keen to foster closer ties with India in order to create a new “arc of freedom and prosperity” along with Australia, US and other countries of the region. This move is seen by Beijing as Japan’s overt strategy to garner international backing to its claims over the Diaoyu or Senkaku islets in East China Sea, which China identifies as its own Air Defense Identification Zone (ADIZ).

Meanwhile, Washington has not formally backed India on the Doklam standoff but the US President Donald Trump called up Prime Minister Narendra Modi last week and the two leaders “resolved to enhance peace and stability across the Indo-Pacific region by establishing a new “two-by-two ministerial dialogue.”

The “two-by-two ministerial dialogue” that is to be held between Swaraj, Tillerson, and India’s Defence Minister Arun Jaitley and American Secretary of Defence James Mattis. US’ keenness in elevating strategic consultations with India comes in the backdrop of the country’s plan to start a quadrilateral security dialogue with India, Japan and Australia to offset China’s maritime assertiveness in the Indian Ocean. India, Japan and the US are already holding regular naval exercises since 2015 in the Indian Ocean which Australia is also keen to join.

Pressure Tactic: First Shipment of US Oil to Reach India by September End

India Freezes Purchase of Additional AH-64E Apache From US