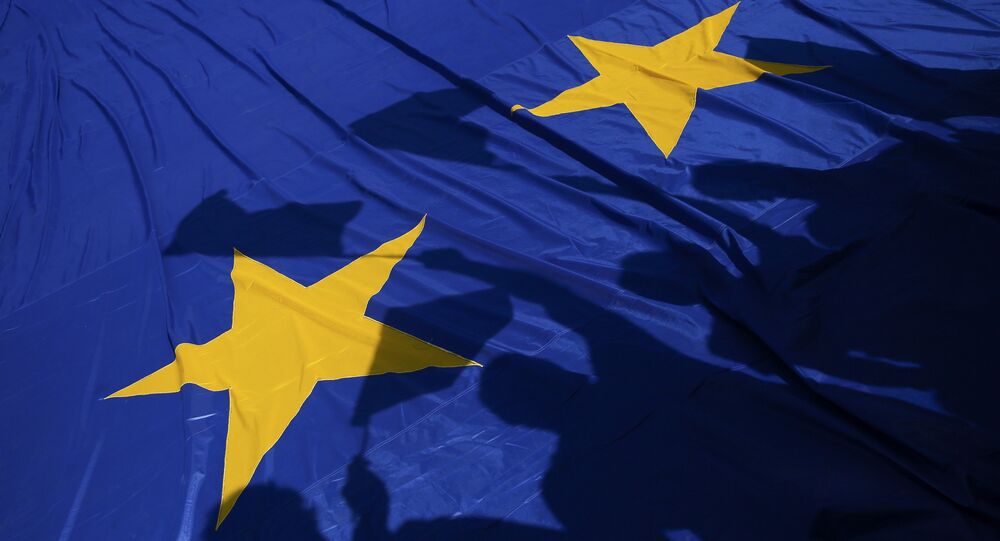 The European Union will not impose sanctions against the United States despite losses by European businesses from US anti-Russian sanctions, Russia's Permanent Representative to the EU Vladimir Chizhov said in an interview with Radio Sputnik.

BRUSSELS (Sputnik) – In early August, US President Donald Trump signed a bill passed by Congress on new sanctions against Russia, Iran and North Korea. After Trump signed the law, German Foreign Minister Sigmar Gabriel called the new sanctions illegal, saying that with their help, the US wants to clear the path for the supply of US energy resources to the EU. In turn, European Commission President Jean-Claude Juncker said Brussels would protect the EU's economic interests.

"I would not immediately call this position [of the EU] submissive. I think the conversation is not over yet. Another thing is that, probably, the EU will not impose response sanctions against the US, but they will have difficult discussions. We can assume that these discussions will go into the bargaining phase, that is, lead to the bargaining of some exceptions or agreements on the non-use of some tools contained in that notorious law," Chizhov said.

© Sputnik / Pavel Lisitsyn
Sanctions Had Little Negative Effect on Russia's Industrial Sector
He added that it would be hard for the EU to work out a unified position on the new US anti-Russian sanctions.

Germany’s parliamentary election is set for September 24. Following the election, Bundestag will elect the chancellor, usually the head of the winning party.

"It could be… Because Germany is basically our main partner in the Nord Stream 2 project. And Berlin, through various representatives, has repeatedly expressed his support for this project, even when someone did not like it," Chizhov said, when asked of the US sanctions situation could influence the German election. He added that he does not want to prejudge the outcome of the election.

© Sputnik / Grigory Sisoev
By 'Trying to Kill Nord Stream 2', US Risks Having 'Serious Tensions' With EU
The Nord Stream 2 aims to deliver 55 billion cubic meters of Russian natural gas per year to the European Union across the Baltic Sea to Germany, bypassing Ukraine. The pipeline is planned to be launched in 2018.

The diplomat reminded that some German politician proposed to reconsider the country’s stance on the issue of Crimea’s reunification with Russia, while on the other hand, it was Germany that initiated the extension of the EU sanctions against Russia over the Siemens turbines allegedly having been moved to Crimea.

The European Union made efforts to protect some energy projects with Russian participation from the new US anti-Russian sanctions, Vladimir Chizhov said in an interview with Radio Sputnik.

Chizhov agreed that in comparison with the bill's original version, the EU managed to "have some corners smoothed out and some figures corrected."

"I can give two examples… In one of the articles… about gas pipelines. In the original version, it was said that the president 'shall' take appropriate steps, and the EU officials claim that it was due to their educational work with the Americans that the verb 'shall'… was replaced by the verb 'may'," he said.

Chizhov also said the level of possible Russian participation in international energy projects had been raised.

"In the original variant it was 10 percent, now 33 percent, which removes some projects with Russian participation from the effect of the law. But, of course, this does not apply to the Nord Stream-2 and our other potential big projects," he said.

In early August, US President Donald Trump signed a bill passed by Congress on new sanctions against Russia, Iran and North Korea. After Trump signed the law, German Foreign Minister Sigmar Gabriel called the new sanctions illegal, saying that with their help, the US wants to clear a place for the supply of US energy resources to the EU. In turn, European Commission President Jean-Claude Juncker said Brussels would protect the EU's economic interests.