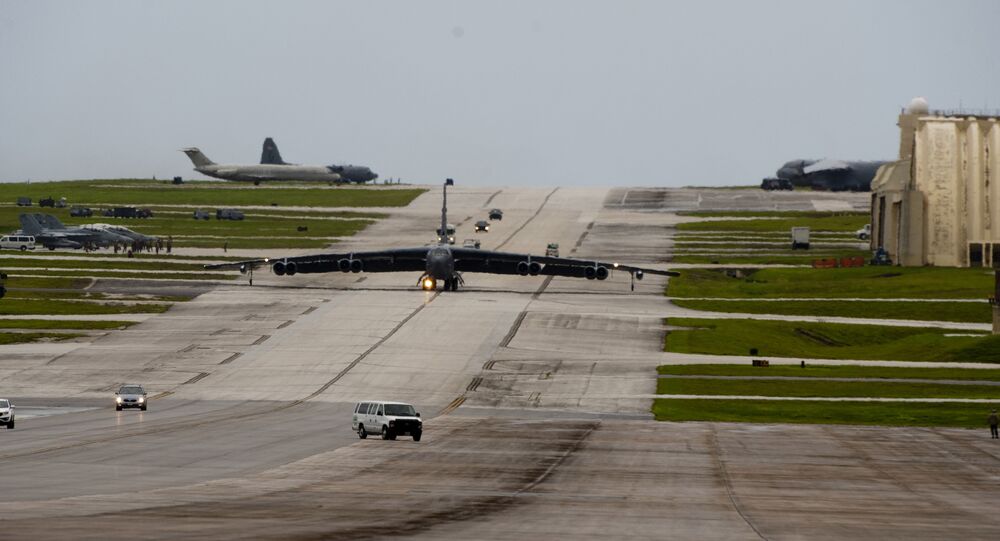 Commenting on the recent sabre rattling between the US and North Korea, the US threat of a preventive strike on Pyongyang and N Korea's threat to work out a plan to attack the US Pacific territory of Guam, Russian military analyst Vladimir Bogatyrev explained to Sputnik Radio why the US President needs external threats for internal policies.

© REUTERS / Major Jeff Landis,USMC (Ret.)/Naval Base Guam/Handout/File Photo
Guam Homeland Security Warns N Korea Missiles Would Reach Island in 14 Minutes
On Wednesday, the NBC broadcaster reported that the Pentagon had prepared a specific plan for carrying out strikes on North Korea, should US President Donald Trump order such an attack.

North Korea, in return, reported that its military are working on a plan to fire missiles at the US Pacific territory of Guam, which is located roughly 2,100 miles (3,379km) south of North Korea and is home to US naval and air force base.

Earlier President Trump threatened Pyongyang that in case it makes "any more threats to the United States," they "will be met with fire, fury and frankly power the likes of which this world has never seen before."

If Putin had threatened another country with "fire and fury", like Trump did to #NorthKorea, there would have been uproar in the West.

​Russian military analyst, retired Maj. Gen. Vladimir Bogatyrev, chair of the Board of the Russian National Association of Retired Military Officers, commented to Sputnik Radio on the mutual threatening between the two nations, explaining why we can expect any steps from Washington in the current situation.

"Taking into account Trump's recent actions in Syria, an absolutely unpredictable strike on the government infrastructure under the pretext of a non-existent chemical attack, a number of other steps, which have been made by both the President and the Pentagon to terrify the whole world, we could expect absolutely any adventurous steps now," he told Sputnik.

© AP Photo / Jon Chol Jin
N Korea's Likely Response Stops US From Preemptive Strike - Russian Lawmaker
While describing the recent foreign policies of the US, the military analyst referred to the term of gunboat diplomacy, foreign policy that is supported by the use or threat of military force. In the case of the United States, gunboat diplomacy is probably most closely associated with Washington's diplomatic and military interventions in the Caribbean during the early decades of the twentieth century.

He suggested that this method is alive and well and is being actively used by President Trump. Trump is getting weak in his internal political struggle and therefore he needs certain external factors and threats.

North Korea, he said, is also acting defiantly in response to the actions which are aimed against it. But the whole of the US foreign policy rhetoric comes down to the forceful solutions in all regions of the world.

"North Korea pursues only one aim — to exist as a state, with its own peculiarities, its own regime, economy and people. It wants to be able to define its own destiny. Its position is: if you leave us in peace, we won't develop any nuclear and missile programs. It simply wants to be able to defend itself, as once wanted India and Pakistan, which obtained nuclear weapons for self-defense," Vladimir Bogatyrev said.

He further explained that it is a dangerous position and it is the aim of the international community, including UN Security Council, China and Russia, to halt and limit the nuclear program of North Korea. However it could be done only by political and, at least, by economic means. It can't be done militarily, otherwise the consequences might be very serious. A country could not be pushed to self-defense by such means, he finally stated.