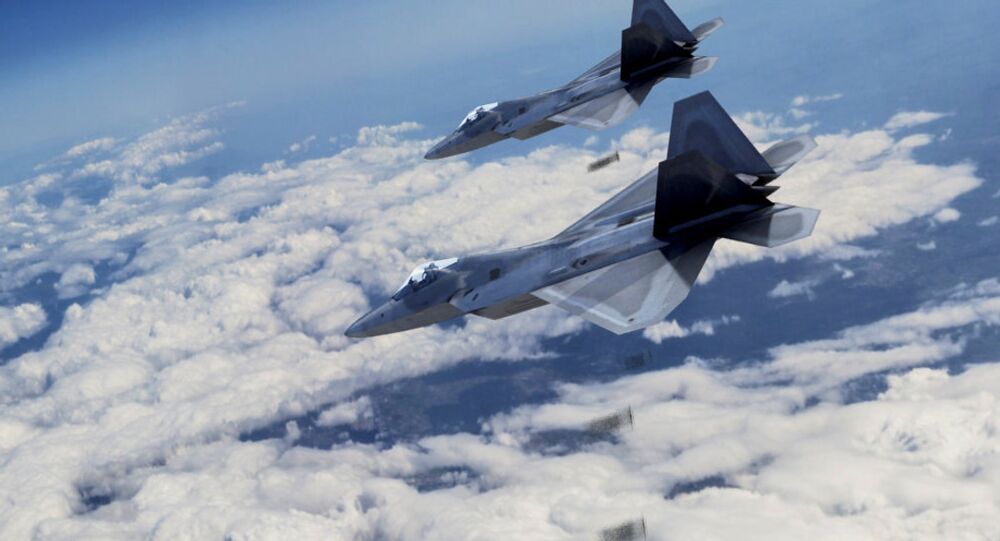 Trump's recent missile attack on Syria and his further threats against North Korea have surprised many political analysts who had predicted a slightly more peaceful start to his term in office. Russian economist and blogger Ivan Danilov warns against underestimating Trump's decisiveness and provides reasons why Iran might be his next target.

"It is important to take into account that the Trump administration, which is being pulled apart by internal discord, is forced to abide by the fundamental constraints of the US economy and its political system," Ivan Danilov, an economist and author of the popular Crimson Alter blog writes in his article for Sputnik.

© REUTERS / Joshua Roberts
Trump Wants to Talk. But Can He Think?
The US' military and industrial complex, he writes, is so crucial to its economy and has in its possession so many serious political resources, that all attempts to avoid drawing the US into a war can only delay it but not ultimately prevent it.

There is a political saying which goes that every American president should wage his own war, the blogger says. But this is not a reflection of the bloodlines of its political leaders but rather a sober assertion that there is a constant need to find a sacrifice for the almighty military-industrial lobby.

The US economy however is unable to sustain a truly large-scale conflict, especially if it causes any serious damage to the global economy. This will entail further losses to the international technological and logistical chains, which are of key importance to the stable operation of US corporations, the economist says.

This greatly limits the range of targets for US aggression.

However the Trump administration is also facing two more issues: first, it should demonstrate strength where Obama demonstrated weakness. Second, the average American has become weary of military conflicts. Trump capitalized on this last point in his election campaign, by promising not to get involved in any senseless wars on foreign soils.

© AP Photo / Fars News Agency
Iran, North Korea Could Attack US With EMP
This explains the hesitancy of the Trump administration to get more actively involved into the Syrian and North Korean conflicts. Apart from PR and a sporadic demonstration of power, any risk of a direct military confrontation with Russia on Syrian territory or of a nuclear incident and a regional war on the Korean peninsula are unacceptable to the White House, Danilov says, at least for now.

In terms of North Korea, the situation is complicated by signals from the US' allies in the region, Seoul and Tokyo, that they are not interested in a US military intervention scenario. Any reckless ventures in Syria or North Korea will bring more damage than benefits to the administration.

However, the blogger says, in the case of Iran, the risk/reward ratio is totally different.

In terms of his PR, Trump might play the Iranian card to demonstrate that he is able to reach success through the use of force where the Obama administration made 'unjustified' concessions to Tehran.

In this way, Trump will also deliver on one of his electoral promises to toughly confront Iran and cancel the nuclear deal. While he fails to deliver on other electoral pledges, confrontation with Iran might became a way to safe his image of the politician who delivers on his promise.

A military operation against such a large regional player as Iran would require considerable investments of power and money and will justify almost any increase in military expenditure. The military-industrial lobby will support this scenario in every possible way, the economist says.

© Sputnik / Valeriy Melnikov
US Seeking Ways to Circumvent Iran Nuclear Deal, Throw Sand in Tehran's Gears
For a number of historic, ideological, political and economic reasons, Saudi Arabia and Israel, the US' key partners in the Middle East, are likely to provide complete support of a military strike on Iran. These two countries have a certain influence on the American internal political processes. According to US media, the Iranian issue is set to top the agenda of Trump's upcoming negotiations in Riyadh and Tel Aviv.

It is not without reason that Trump is being called the "president of oil producers." He has already taken certain measures to support US oil companies, including the appointment of ExxonMobil CEO Rex Tillerson as his secretary of state.

The President has also unraveled Obama's environmental restrictions, which is also in favor of the oil sector, however it pales into comparison with the stream of petrodollars which would pour onto the American oil producers in case of a real war in the Persian Gulf.

While the escalation of geopolitical tensions around Iran might cause an increase in energy prices, a full-fledged military operation is guaranteed to see an oil price spike.

China will be then left without its major supplier of energy resources, which will come as an additional bonus to the US, Danilov says.

Another strategic purpose the US might achieve in the region with the help of Iran might be to create a situation of "controlled chaos." The collapse of the Iranian authorities will create the ideal conditions for the spread of various radical groups.

The elimination of an Iranian deterrent will have an impact on stability of the neighboring states and will pose a threat to Russia in the Caucasus. Besides, the elimination of the viable Iranian authorities will have a negative impact on China's major geopolitical project, namely its so-called "Silk Road" project, where Iran is playing not an insignificant role.

© AFP 2021 / ATTA KENARE
Trump vs. Tehran: 'Ripping Up Iran Deal Would Cause US Credibility to Plummet'
Hence the strike on Iran can be quite a rational solution to the task of deterring China and exerting pressure on Russia, the blogger concludes.

Among the drawbacks of direct military confrontation with Iran, he further reasons, is the risk of being targeted by Russia's anti-missile defense systems which have been supplied to Iran. Besides, the US' European allies seem to be reluctant to abandon the results of Obama's nuclear deal which opened Iranian natural resources and the Iranian market to the European companies. It is yet to be seen whether these risks can prevent the escalation of the conflict between Washington and Tehran.

What we are currently witnessing, Danilov says, is an evident diplomatic preparation towards the cancellation of the agreement with Iran.

Trump has recently claimed that Iran "is not living up to the spirit" of the nuclear deal, while Tillerson has said that Tehran is complying with the deal but "continues sponsoring terrorism."

The blogger recalls that the fight against terrorism was one of the pretexts for the military interventions of President Bush and nobody will prevent the Trump administration from using this trick again. Besides, he added, there are many radical "hawks" in the US Republican party who will eagerly drop their criticism of Trump for a large war in the Middle East.

© AFP 2021 / KAREN BLEIER
US 'Walking on the Razor's Edge' as Uncertainty Over Ties With Iran Looms
Danilov finally reviews Russia's possible role in the potential Iranian-American conflict. He calls it "unviable" to enter the war for Iran. Nor it is to support a possible operation of the US.

As cynical as it may sound, the most rational approach would be to prompt both parties to the conflict to suggest to Russia some economic and political benefits in exchange for its limited support or neutrality.

The ideal variant would be to provide a diplomatic solution to the Iranian-American problem with the support of China and the EU, however it is too early to speculate on this, he said. First, it is necessary to wait what plans and ideas Trump will bring back from his Middle Eastern trip, the blogger concluded.