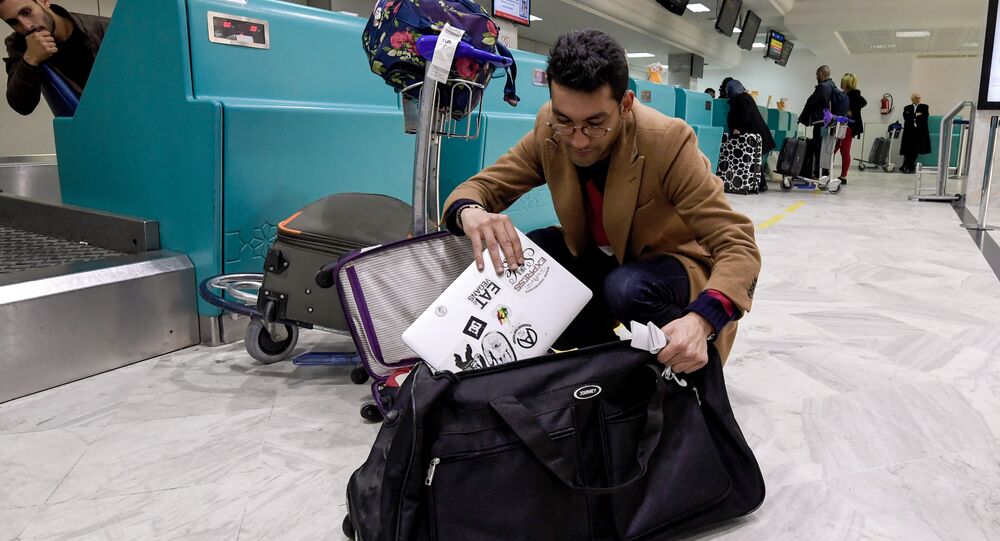 The US and UK have implemented a ban on using electronic devices larger than a mobile phone aboard flights from an array of countries in the Middle East and North Africa because of a terror plot, a security source has told the media.

© AP Photo / Kamran Jebreili
Terror Threat Could Be Behind Ban on Electronics on Some US-Bound Flights
Authorities in the US and UK took the decision to ban electronic devices larger than a mobile phone from airplane passenger cabins after the exposure of a terror plot involving an Apple tablet computer, a security source told the Guardian.

Intelligence agencies uncovered a plot to blow up an airplane with explosives hidden in a fake iPad that appeared to be genuine, the source said.

The plot has raised authorities' fears that terrorists are finding more sophisticated ways of getting hidden explosives onto planes.

Last year, the Islamist terrorist organization al-Shabaab smuggled an explosive-filled laptop onto a flight out of Mogadishu. When it exploded, the bomb blew a hole in the side of the plane but failed to down the aircraft.

On Tuesday, the US Department of Homeland Security issued a directive for incoming flights from 10 major airports in eight Middle Eastern and North African countries: Egypt, Jordan, Kuwait, Morocco, Qatar, Saudi Arabia, Turkey and the UAE.

© REUTERS / Neil Hall/File Photo
Tunisia Summons UK Ambassador Over New Ban on Electronics on Flights
Airlines were ordered to require that passengers pack larger gadgets such as tablets, laptops and games consoles in their checked baggage.

The UK has banned the items from passenger cabins on all incoming flights from six countries. It considers security to be inadequate at airports in a different range of countries: Egypt, Jordan, Lebanon, Saudi Arabia, Tunisia and Turkey.

So far, other countries have not imposed such bans on electronic devices.

It is thought to be more difficult to blow up a plane with explosives planted in the cargo hold, since a more powerful bomb would be required to tear through the reinforced underside of a plane, as opposed to the more vulnerable passenger cabin.

However, in 1988 Pan Am Flight 103 was destroyed over Scotland by a bomb hidden in a cassette player in checked baggage.

US Citizens Should Avoid Travel to Eastern Mauritania - State Dept.