Riyadh has shot itself in the foot by adopting a predatory pricing policy in the oil market aimed at wiping its competitors out; now the House of Saud is reaping a whirlwind it sowed.

Back in 2014 Saudi Arabia decided to drop oil prices in order to expel Russia from the European and Asian oil markets and at the same time to deal a heavy blow to the US shale oil industry.

However, the Saudi royalty has apparently never heard of the old Chinese proverb that says: "Before you embark on a journey of revenge, dig two graves."

"The [House of Saud] decided that it has no equals in a position to punish Moscow for its persistent support of the Syrian people and its striving to develop bilateral relations with Iran and even Iraq, the states which could form a Shia arc capable of challenging, even destroying the tyranny of the Saudi regime," Lvov writes in his article for New Eastern Outlook. 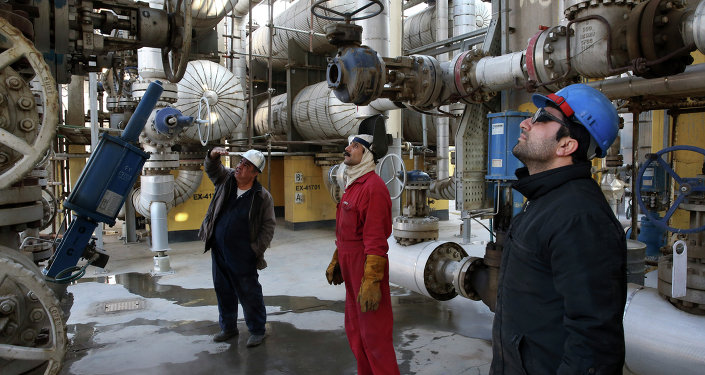 © AP Photo / Vahid Salemi
Oil Rivalry: How EU is Twisting Iran, Saudi Arabia Around Its Little Finger
Although Russia has been hit by the slump in oil prices it has remained "standing tall" and proven "to be more resilient that Saudi Arabia which produces nothing else besides hydrocarbons, and is fully dependent on cheap labor from Asia," the scientist stresses.

Lvov draws attention to the fact that in 2016 it turns out that Riyadh has nearly run out of money being unable to pay working migrants enough for their jobs. Other oil-dependent Gulf kingdoms are now in the same boat as Saudi Arabia.

"To make matters worse, migrant workers are becoming increasingly frustrated with the Persian Gulf states," he notes, warning that the proportion of local populations versus migrants in Gulf monarchies can result in social turmoil.

"In Qatar, there are seven migrant workers for every one native, while in the UAE this level hovers at a level of six-to-one. And it's safe to say that the army or police will find themselves helpless if hundreds of thousands of people take to the streets. In fact, a threat of 'revolution' hangs in the air," Lvov writes.

But it is not the whole story.

In one of his latest articles for the same resource, American political analyst Phil Butler posed a question whether Saudi Arabia's oil business is going bust.

According to the US political analyst, there are clear signs of Riyadh's running out of crude.

"The Ghawar Field, largest in the world, is running out after about 65 years of continuous production. Reports the Saudi Aramco will be starting the CO2-EOR process to extract the last of the field's oil, they tell us this field will be depleted totally soon," Butler emphasized.

© AFP 2019 / POOL/FAYEZ NURELDINE
Masochistic Alliance: Why Does Saudi Regime Appeal to Washington?
In that instance, what does the future have in store for the Gulf kingdom?

Instead of kicking off a dangerous oil race Riyadh should have started to diversify its crude-centered economy.

To complicate matters further, with Iran back on the stage it will be more difficult for Riyadh to manipulate oil prices.

"However, once the sanctions against Iran have been withdrawn, Tehran is going to fight for its share in the market by increasing its oil production and export levels… With international markets being oversupplied, experts fear that we may witness a new round of price dumping," Lvov notes.

Apparently, Saudi Arabia cannot afford itself to continue its predatory pricing policy, since the very survival of the state is now at stake. Maybe that's why Saudi Arabia is taking steps toward cooperating with Russia, another world's leading oil producer, however incredible it sounds.

Washington Wants to Pour Millions of Dollars in This Country