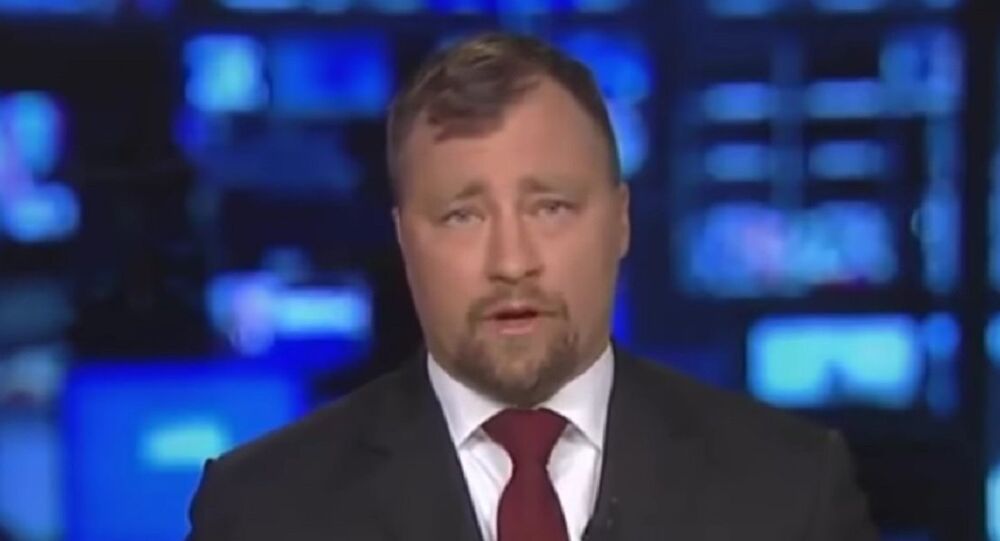 Following the US President's remarks on the alleged crisis in Sweden, Fox News attempted to get to the bottom of what's really going on there. In an ironic turn of events, the "Swedish defense and national security advisor" whom the channel invited to The O'Reilly Factor turned out to be a complete stranger to the country's defense services.

© AP Photo / Martinez Monsivais
#LastNightInSweden: Swedish Embassy Asks Trump to Explain Mysterious Remark About Country
On February 23, Fox News aired an episode of Bill O'Reilly program featuring Nils Bildt, introduced as a "Swedish defense and national security advisor." The program aimed to explain the situation that the US President Donald Trump referred to last week, when, speaking at a rally in Florida, Trump hinted at a security crisis that had allegedly unfolded in Sweden just the night before.

The president's comment raised eyebrows across the globe, with Sweden's Embassy in Washington asking him to clarify what exactly he meant. Later, Trump took to Twitter to explain where he had gotten his information: Fox News.

My statement as to what's happening in Sweden was in reference to a story that was broadcast on @FoxNews concerning immigrants & Sweden.

The confusion behind Trump's remarks quickly evolved into a wide-scale mocking campaign on social media and international news outlets.

In response to #lastnightinsweden, Sweden has deployed their elite force of Super Troupers. pic.twitter.com/Qk4cdWriwz

#lastnightinsweden: Mass immigration from the north, due to global warming. pic.twitter.com/fJ8nMLKREP

Sweden's former Prime Minister topped all other comments by saying that "last year there were approximately 50 percent more murders only in Orlando/Orange in Florida, where Trump spoke the other day, than in all of Sweden. Bad."

It took Fox News, the very media outlet that provided Trump with the report on the "chaos" in Sweden, a week to find an authentic analyst who would explain, once and for all, what is really happening in the Scandinavian country. Alas, the person they introduced as a "defense and national security advisor" is known as such only to the Fox News team, as Swedish officials have never heard of the mysterious Nils Bildt.

Fox News Swedish "expert" Nils Bildt to discuss Sweden. Problem? Not a "Swedish Natl Security advisor", has a criminal conviction in the US. pic.twitter.com/1ekyouIEwN

Mainstream Swedish newspaper Dagens Nyheter quoted Marie Pisäter, employee of the Swedish Defense Ministry, saying that no one by the name of Nils Bildt works there. The newspaper then contacted the Foreign Office, which also denied having this man in employment.

Furthermore, a Swedish defense analyst Johan Wiktorin (cited as such in the Swedish news outlet Expressen) refuted any knowledge of a colleague called Nils Bildt.

So @FoxNews This is Nils G Tolling and he's not known in our circles as an expert. Not on National Security anyway. pic.twitter.com/2MVu85mhWr

I think he was the fifth member of ABBA too. https://t.co/1AfGxvppYQ

Well, they also had this French expert who confirmed everything Nils Bildt said. So, fake?! I think NOT! @FoxNews #NilsBildt #svpol #Sweden pic.twitter.com/vtlOhDxKIm

So who is Nils Bildt? According to Swedish media, the man, born Nils Tolling, emigrated to the US in 1994, changing his family name to Bildt in 2003. He runs several security companies in the US. The newspaper also cited a 2014 court case against a certain Nils Tolling, claiming that it was Bildt who was arrested for obstruction of justice and assault. Bildt declined to comment on this issue in an email to the newspaper, saying that he was not aware of the allegations.

Here's how David Tabacoff, the executive producer of Bill O'Reilly's show, tried to explain the network's choice of an expert: "Our booker made numerous inquiries and spoke to people who recommended Nils Bildt and after pre-interviewing him and reviewing his bio, we agreed that he would make a good guest for the topic that evening."

In an email to Dagens Nyheter, Bildt explained the blunder himself: "It was a Fox News editor who used this title – I had no control over their choice of the title. I am an independent analyst based in the US."

Bill O'Reilly touched on the issue in his program on Monday, admitting the mistake and explaining the reasons behind the incident.

"Now, we looked into the situation and the criticism is valid. It’s valid. Mr. Bildt does consulting work on terrorism, that’s true — but we should have clarified that he had no direct role with the Swedish government," O'Reilly said. "To be fair, the information we gave you in the segment was accurate but in hindsight a more relevant guest should have been used on the anti-immigrant side. You should also know that before the segment was booked we asked the Swedish Ambassador to appear, he declined. That invitation stands."